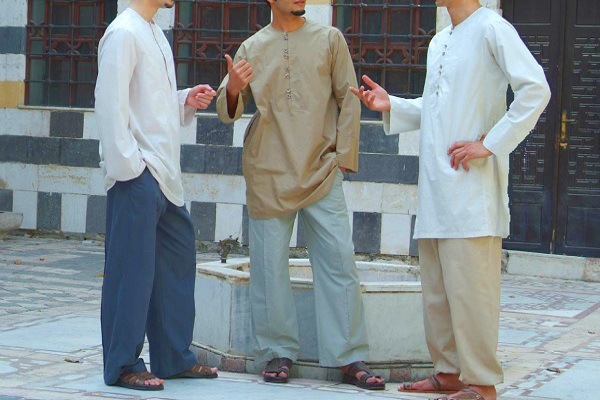 In the global dialogue about Muslims, the gender that suffers most is the Muslim men who garner distrust and suspicion from non-Muslims and seemingly lack attention in the Muslim community.  Negative media portrayals of Muslim men have depicted them as oppressive forces who brutalize their women and kids and fail to extend equal respect and rights to the citizens around them.  At the same time, they are also least defended and protected than the women in the Muslim world.

One of the most common questions raised by the non-Muslims is that ‘if a Muslim woman is mandated to wear hijab, then why is a Muslim man exempt from this obligation in Islam?’

The truth is that Muslim men are equally required to follow hijab.

The term “hijab” does not refer to a headscarf, but Islamically, in the broader sense, it encompasses modesty and chastity of men and women’s garments and guarding one’s gaze.  Guarding one’s gaze refers to avoiding  “checking out” the opposite gender, to walk humbly as not to attract any undue attention and to remain virtuous throughout life.  However, society specifically attached the word “hijab” to a fabric that appropriately covers the head.

When following hijab, men are required not to wear tight and revealing clothes or behave in such a manner where they are sexually objectifying themselves.  This is similar to requirements that must be upheld by Muslim women.  Men are obligated to cover themselves from navel to below the knee.  Though this is quite a loose definition of appropriate dressing, it is only allowed if there are no women present.

While a woman in Islam has a choice to earn money or not, men are required to financially support their families.  The belly-button to below the knee dress code is tolerable in particular circumstances such as for a man holding a blue-collar job as he works under extreme dry temperature and heat.  However, if a woman is working alongside him in this kind of terrain, he has to observe a strict dress code.

Men are to dress in a simple manner, so their clothing does not imply vanity and status of their wealth because pride and boastfulness are one of the biggest sins in Islam.  Moreover, they are forbidden to dress like a woman.  They also cannot wear gold jewelry or silk clothing while women face no such restrictions.

Another requisite is that men should lower their gazes when encountering a woman to avoid disrespecting her by having sensual thoughts of her.  Most importantly, he is expected to be respectful to others, not only physically but also verbally, especially with the opposite gender.

Men are also mandated not to shake hands with women whom they do not have immediate familial relationships.  For instance, mothers, sisters, wives and daughters are the ones a man can freely intermingle with.  This practice is followed by some Muslims but not all.   It does not mean that a Muslim man cannot talk to a woman at all.  It is permissible as long as it is done in public with a respectful distance between their bodies, and the conversation has to follow the rules of modesty, without any inappropriate intentions on the part of either man or woman.

Many Muslim nations, such as Saudi Arabia, tend to have separate spaces for both the genders in public spheres. Because this idea of separate spaces is unfamiliar in the western world, the perceived reasons for it are often misunderstood. Separating spaces by gender is done to create a culture of modesty that coincides with Islamic belief. Religiously there are no pre-marital relationships or physicality between men and women and maintaining respectful space and distance is a way of maintaining Islamically appropriate interactions.

In regards to growing a beard, the situation is parallel to a woman wearing a niqab (the face covering).  Some Muslims hold belief that it is at the discretion of an individual while others sees it as a compulsory form of hijab.

Another significant aspect of hijab is that men and women both have the responsibility to remain chaste before their weddings to maintain a healthy society.

So, although men do not wear headscarves, their hijab is parallel to women’s. Both men and women have equivalent obligations and duties to follow in regards to clothing, when socially encountering the opposite gender and guarding one’s purity until the marital vows. Islam by no means promotes or advocates sexism as it clearly states in the Qur’an that both the men and women are equal with comparable rights.