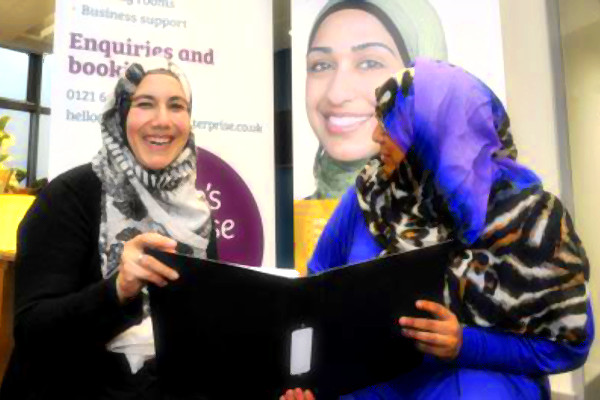 A WOMEN’S enterprise hub in Birmingham has been hailed as a ‘breath of fresh air’ by Muslim women who have moved to the UK from France to make new lives for themselves and their families.

The Women’s Enterprise Hub in Sparkbrook has been operating for the last two months and is already helping to transform women’s lives and give hope to new settlers coming to Birmingham.

Those with business ideas are being helped with start-ups plans, employment, marketing and growth through networking and peer support at this Ladypool Road centre.

Self-contained within the Southside Business Centre, the hub offers contemporary space for ‘hot desking’, using the internet or the chance to rent a business unit.

Algeria-born Kaissa Sahib left Paris for Birmingham almost three years ago and says she and her family have never looked back.

Kaissa, trained as a solicitor in the French capital before starting a family.

Now she is busy launching an organic skincare business with help from the hub which is helping her to develop her ideas.
“I have found people here in Birmingham to be very warm and friendly – people realise we are no different to them.”

One woman, a trained psychologist, whose family is from Congo left Paris for Birmingham recently, told The Voice:

“In France many people think you cannot be black and French – you have to be white. Because of this I often had problems working as a psychologist.

“I want my daughters to have good career choices and they can have that here in the UK – they can aspire to become doctors or lawyers and hopefully their generation will change this world for the better. Over here in Birmingham our white neighbours accept us and are welcoming.”

Another woman said: “I was amazed when I asked a black woman in Birmingham where she came from and she said: ‘I am British.’ I couldn’t believe it. My daughter, born in France, can only dream of being identified as French. At least here in Birmingham you can say you belong.

“Our children in France do not believe they belong anywhere and we fear for them.