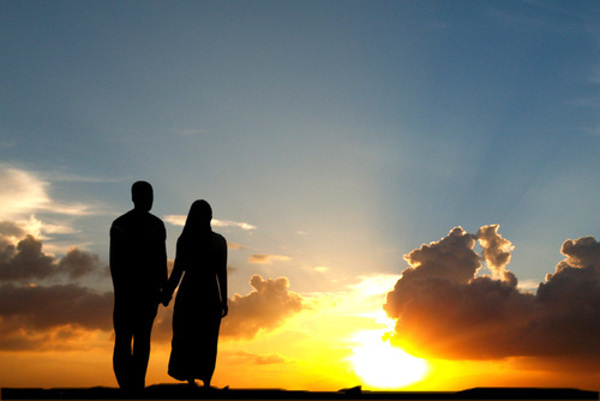 In the literature discussing Futuwwa, which has been translated as Muslim chivalry, there is the story of a young man who was engaged to marry a particularly beautiful woman. Before the wedding day, his fiancée was afflicted with a severe case of chicken pox which left her face terribly disfigured. Her father wrote to him informing him of the situation and asking if he preferred to call off the wedding. The young man replied to her father stating that he would still marry his daughter, but that he had recently experienced a gradual loss of sight, which he feared would culminate in blindness. By the wedding date he had in fact completely lost his vision.

The wedding proceeded as planned and the couple had a loving and happy relationship until the wife died twenty years later. Upon her death the husband regained his eyesight. When asked about his seemingly miraculous recovery he explained that he could see all along. He had feigned blindness all those years because he did not want to offend or sadden his wife.

From our jaded or cynical vantage points it is easy to dismiss such a story as a preposterous fabrication. To do so is to miss an important point that was not lost to those who circulated and were inspired by this and similar tales. Namely, our religion is not an empty compilation of laws and strictures. The law is important and willingly accepting it is one of the keys to our salvation. However, the law is also a means that points us towards a higher ethical end. We are reminded in the Qur’an, Surely, the prayer wards off indecency and lewdness (29:45).

The Prophet, peace and blessings upon him, mentioned concerning the fast, “One who does not abandon false speech and acting on its imperatives, God has no need that he gives up his food and drink” (Bukhari, 1903). These narrations emphasize that there is far more to Islam than a mere adherence to rulings.

This is especially true in our marriages. Too many Muslims are involved in marriages that devolve into an empty observation of duties and an equally vacuous demand for the fulfillment of rights. While such practices are laudable in their proper context, when they are divorced from kindness, consideration, empathy, and true commitment they define marriages that become a fragile caricature. Such relationships are irreparably shattered by a silly argument, a few wrinkles on the face, unwanted pounds around the waist, a personality quirk or a whimsical desire to play the field to see if one can latch on to someone prettier, wealthier, younger, or possibly more exciting than one’s spouse.

These are issues that affect men and women. However, we men must step up and do our part to help to arrest the alarmingly negative state of gender relations in our communities. The level of chivalry the current crisis demands does not require that we pretend to be blind for twenty years. However, it does require some serious soul searching, and it demands that we ask ourselves some hard questions. Below are a few areas where our inquiries might begin.

Why are so many Muslim men averse to marrying older or previously married women? The general feeling among the women folk in our communities is that if you are not married by the age of twenty-five, then you have only two chances of being married thereafter –slim and none. This sentiment pervades our sisters’ minds and hearts because of the reality they experience. Many brothers who put off marriage until they are past thirty-five will oftentimes marry someone close to half their age, passing over a generation of women who are intellectually and psychologically more compatible with them and would prove wiser parents for their children.

Despite this problem, and the clear social, psychological and cultural pathologies it breeds, many of us will hasten to give a lecture reminding our audience of the fact that Khadija, the beloved wife of our Prophet, peace upon him, was fifteen years his senior. We might even mention that she and several of his other wives were previously married. Why is it that what was good enough for our Prophet, peace upon him, is repugnant to ourselves or our sons?

A related question would be, “Why are so many of our brothers so hesitant to marry strong, independent, intellectually astute women?” Many women in the West lack the support of extended family networks, which is increasingly true even in the Muslim world. Therefore, they must seek education or professional training to be in a position to support themselves, if necessary, or assist their husbands, an increasingly likely scenario owing to the nature of work in postindustrial societies. This sociological fact leads to women in the West generally manifesting a degree of education and independence that might not be present among women in more traditional societies –even though such societies are rapidly disappearing.

Many Muslim men will pass over talented, educated women who are willing to put their careers and education on hold, if need be, to commit to a family. The common reason given is that such women are too assertive, or they are not the kind of women the prospective husband’s mother is used to. As a result a significant number of our sisters, despite their beauty, talent, maturity, and dynamism are passed over for marriage in favor of an idealized, demure “real” Muslim woman. The social consequences of this practice are extremely grave for our community.

Again, we can ask ourselves, “To what extent does this practice conform to the prophetic model?” Our Prophet, peace upon him, was surrounded by strong, assertive and independent women. His beloved Khadija, who we have previously mentioned, was one of the most successful business people in the Arabian Peninsula, and her wealth allowed the Prophet, peace upon him, to retreat to the Cave of Hira where he would receive the first revelation. Aisha, despite her young age was an aggressive, free-spirited, intellectual powerhouse who would become one of the great female scholars in history. The foundation for her intellectual greatness was laid by the Prophet himself, peace upon him. Zainab bint Jahsh ran a “non-profit” organization. She would make various handicrafts, sell them in the market and then use the proceeds to secretly give charity to the poor people of Madina. Umm Salama, had the courage to migrate from Mecca to Medina, unescorted, although she was ultimately accompanied by a single rider. She also had the vision to resolve the crisis at Hudaybiyya. These were all wives of the Prophet, peace upon him. To their names we could add those of many other strong and dynamic women who played a major role in the life of the fledgling Muslim community.

Another issue that is leading to many otherwise eligible women remaining single relates to color. If a panel of Muslim men, whose origins were in the Muslim world, were to choose Miss Universe, the title would never leave Scandinavia. No matter how beautiful a woman with a brown, black, or even tan complexion was, she would never be quite beautiful enough, because of her skin color. This attitude informs the way many choose their wives. This is a sensitive issue, but it is one we must address if we are to advance as a community. We may think that as in other areas ours is a “colorblind” community. However, there are legions of women who have been relegated to the status of unmarriageable social pariahs who would beg to differ.

God has stated that the basis for virtue with Him is piety, not tribe, race, or national origin (49:13). The Prophet, peace upon him, reminded us that God does not look at our physical forms, or at our wealth. Rather, He looks at our hearts and our deeds (Muslim, 2564). We debase ourselves when we exalt what God has belittled. God and his Messenger, peace upon him, have belittled skin color as a designator of virtue or distinction. What does it say about us when we use it as a truncheon to painfully bludgeon some of the most beautiful women imaginable into social insignificance?

Marriage is not a playground where the ego thoughtlessly pursues it vanities. This is something the chivalrous young man mentioned at the outset of this essay understood. It is an institution that helps a man and a woman pursue the purpose of their creation: to glorify and worship God and to work, within the extent of our capabilities and resources, to make the world a better place for those we share it with and for those we will leave it to. This role is beautifully captured in the Qur’an, The believing men and women are each others supporting friends. They enjoin right, forbid wrong, establish regular prayer, pay the poor due, and they obey God and His Messenger. They expect God’s Mercy. Surely, God is Mighty, Wise. (9:71)