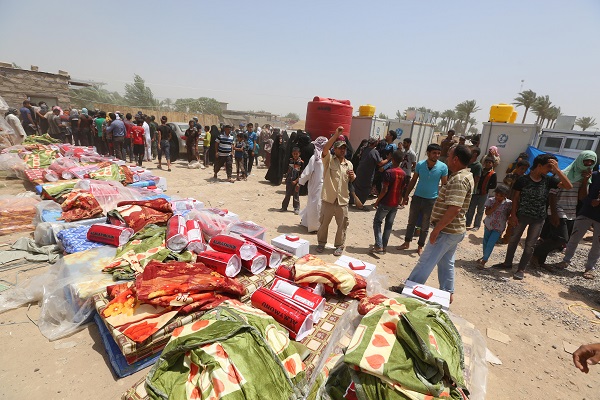 Displaced civilians from Ramadi wait to receive humanitarian aid from the United Nations in a camp in the town of Amiriyat al-Fallujah, west of Baghdad, Iraq, Friday, May 22, 2015. The United Nations World Food Program said it is rushing food assistance into Anbar to help tens of thousands of residents who have fled Ramadi after it was taken by Islamic State militant group. (AP Photo/Hadi Mizban)

At least 13 civilians have been killed by a roadside bomb while attempting to flee from ongoing fighting between Iraqi government forces and the Islamic State of Iraq and the Levant (ISIL/ISIS/DAESH) group in Ramadi.

Military sources said that the civilians, including seven women and three children, died on Sunday when the bomb blew up in al-Bu Ghanim village, in Sufiyah district, in the city’s east.

Iraqi forces, backed by air strikes conducted by the international coalition, recently pushed ISIL fighters out of central Ramadi, the capital of Anbar province, months after the armed group captured the key city, located about 100km west of Baghdad.

Since recapturing Ramadi in late December, Iraqi forces have continued to battle ISIL fighters, who regrouped in eastern parts of the city.

Despite the losses, Iraqi military sources said that their advance on ISIL’s new stronghold has been met with little resistance.

Taking back eastern Ramadi is key for the Iraqi forces, as it will help secure the main highway to the Habaniyah military base, about 30km east of the city.

In May, Ramadi fell to ISIL, which has seized territory in both Iraq and Syria, in an embarrassing setback for Iraqi forces. But analysts say recapturing the city could deprive ISIL of its biggest prize of 2015.

Meanwhile, Iraqi officials say order is being restored to the eastern city of Miqdadiyah, which was the scene of an ISIL-claimed attack last week that killed at least 20 people.

Saleem al-Juburi, Iraq’s parliamentary speaker, said at a press conference on Sunday that the perpetrators would be brought to justice soon.

“There are criminals that the government is aware of. And those who say that we don’t know who they are, I tell them we do,” he said.

Juburi said it was too easy for armed groups to gain access to weapons in Miqdadiyah.