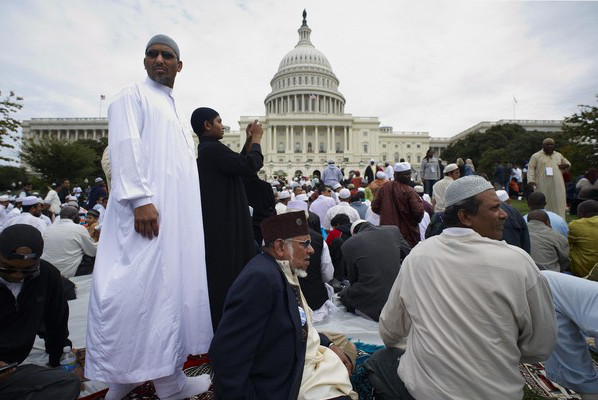 NEW YORK – In early December, 2015, Muslims and their beliefs become the hottest, most incendiary topic in the U.S. presidential election campaign.

“Donald J. Trump is calling for a total and complete shutdown of all Muslims entering the United States,” announced Republican candidate and frontrunner Trump, making his position and thinking about Muslims very clear.

Trump went on to talk briefly about the 9/11 terrorist attacks, asserting that Muslims want jihad against the United States. “We have no choice, we have no choice,” he ruminated.

His position set off a tidal wave in the Republican party, splitting the its position on Muslims and Muslim-Americans. It also raised the hackles of Democrats.

A month later, President Barack Obama was still speaking out against it. “When politicians insult Muslims… that doesn’t make us safer,” Obama said in his State of the Union Speech Tuesday. “It’s just wrong.”

But in the eye of the controversy, what do Muslims think?

Muslims say they feel at home in the U.S. and one of the reasons is that democracy is not unfamiliar. Leading Muslim cleric Feisal Abdul Rauf says Islamic law is based on democratic principles.

“The Declaration of Independence is very much in line with the objectives of Islamic law,” he told VOA. “Our rulers are legitimized by those who rule them by way of elections. These are all procedures which are very much in sync with Islamic law.”

Feisal is founder of the Cordoba Initiative, a non-profit organization dedicated to improving Muslim-West relations and promoting moderation. In his new book, Defining Islamic Statehood, he talks about contemporary Muslim life in America.

“Many Muslims feel the United States of America, for them, living in this country is far more Islamic than many countries they come from, and I certainly share that opinion myself.” The Imam was born and raised in the United States.

His book is a six-year study involving Muslim scholars and leaders from around the world. The consensus reached: there were six major objectives in Islam: protection of life, dignity, property, family, intellect and religion – all compatible with the American way of life.

In New Jersey, young Muslim leader Mahmoud Mahmoud is a local community worker. He believes strongly in ties between Muslims and non-Muslims in America, and he agrees with Feisal. “In America there’s a more Islamic way of life than there [is] in Muslim countries.”

Mahmoud defines that way of life by what it isn’t. “You see nepotism is everywhere in Islamic countries,” he says. “Corruption, the mistreatment of women, the lack of rights for the poor, social justice; poverty is everywhere. So if you take a look at how these issues are in America, people here are able to express themselves freely.”

To the extent that America strives to eliminate corruption and other problems is to Mahmoud very religious. “Those are all fundamental values that are enshrined in every religion. If you take a look that caring for thy neighbor or caring for the poor, so there are lots of things I agree with in saying that.”

“To say you cannot allow Muslims here, if you try to do it, you will discover how intimate the relationship America has with the Muslim world is. It’s not doable.”