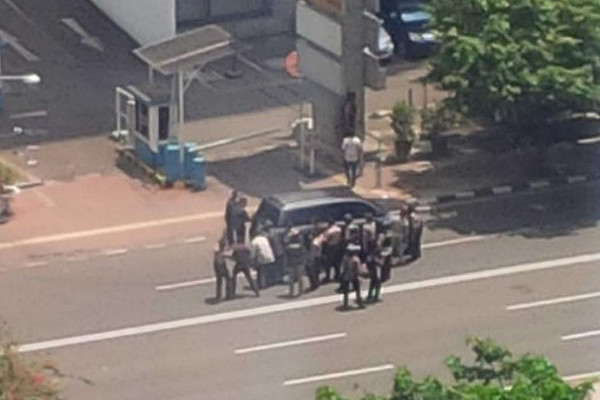 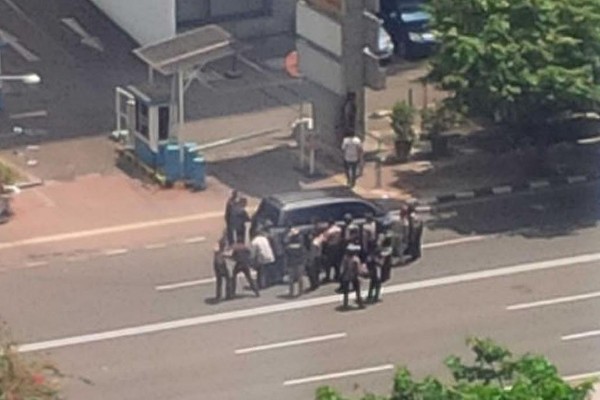 Indonesian officials say they suspect an Islamic State-linked group is responsible for Thursday’s coordinated bomb and gun attack in the capital that left seven people dead, including all five attackers.

The militants, who attacked an upscale neighborhood in central Jakarta, were likely trying to imitate the recent Paris terror attacks, according to Indonesia’s national polices spokesman Anton Charliyan.

The violence began with a series of explosions mid-morning in an area near an upscale shopping center, luxury hotels, embassies, and other office buildings. In total, six blasts were reported.

The militants engaged in intense gun battles with police throughout the day. By late afternoon, authorities declared the attack over, saying all  five militants were killed. Two civilians, including a Dutch citizen were also killed, police said.

No one has claimed responsibility for the attack, which comes after Indonesian authorities in November received a threat from the Islamic State group about a coordinated bomb attack in the capital.

“Around Christmas and New Year’s there was a threat by this group (IS/ISIS) that they will do what they call a ‘concert’ in Jakarta, meaning they will set off bomb explosions in several places at the same time,” said VOA Indonesian Service reporter Frans Demon.

At least one of the blasts appeared to target a Starbucks coffee shop frequented by foreigners. A subsequent gun battle was said to have erupted after police stormed the cafe.

“This is a very popular shopping area with restaurants and office buildings. About 50 meters from there is the United Nations office. The U.S. Embassy is almost around 400 or 500 meters from there, not far from the presidential palace, actually. So this is a really centrally located place,” Demon said.

Witnesses said some of the explosions were caused by suicide bombers, though police officials have denied this, saying instead the attackers threw grenades as they drove by on motorcycles.

President Joko Widodo, speaking to a local television station, condemned the “acts of terror,” stressing authorities are working to contain the situation.

“Our nation and our people should not be afraid. We will not be defeated by these acts of terror. I hope the public stays calm,” said the president, who is on a trip to the island of Java.

Near the site of the initial explosions, a United Nations building was said to be on lockdown.

In a series of tweets, Jeremy Douglas, a regional representative for the U.N. Office on Drugs and Crime for Southeast Asia and the Pacific, reported at least six explosions, including an apparent suicide bomber and a “serious exchange of gunfire in the street.”

Leaders from around the region also expressed condolences and expanded security measures.

Australian Foreign Minister Julie Bishop also condemned the violence and offered “any support that Indonesia may need to respond to these attacks.”

Malaysian Prime Minister Najib Razak said he was “shocked and saddened” by the attack. Malaysia “stands ready to help in any way,” he said in a tweet.

The Royal Malaysian Police said they have raised their security alert level to the “highest degree,” ramping up public police patrols and increasing monitoring of terror suspects.

In Singapore, officials said they were “deeply shocked” at the Indonesian attack and also implemented stepped up security measures.

Indonesia, the world’s largest Muslim majority nation, has been the target of several terrorist attacks, most notably the 2002 Bali bombings that killed 202 people, mostly foreign tourists.

Before Thursday, the last attack against foreigners was a twin hotel bombing in Jakarta in 2009.

Jakarta has long been warning about the threat of recruitment by Islamic State and other extremist groups. Hundreds of Indonesians are believed to have left to fight with Islamic State in Syria and Iraq.