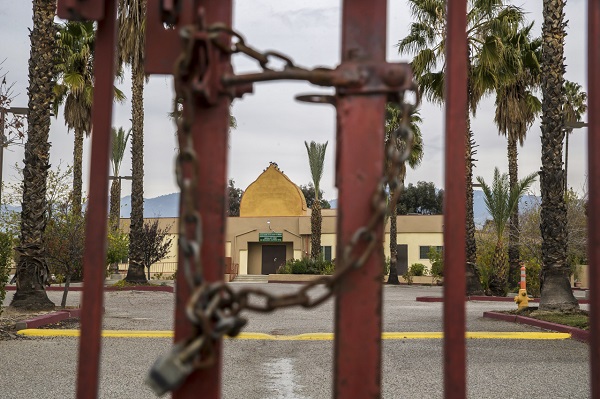 The Dar Al Uloom Al Islamiyah-Amer mosque, where shooting suspect Syed Rizwan Farook was said to have attended, in San Bernardino, Calif., Dec. 4, 2015. The attack carried out by Farook and Tashfeen Malik was the nation’s deadliest mass shooting since the assault on an elementary school in Newtown, Conn., nearly three years ago. (Monica Almeida/The New York Times)

Muslim activists in the United States say they are caught up in two simultaneous battles: fighting the Islamic State group and other extremists in their efforts to recruit Americans as terrorists, while also struggling against Islamophobia — prejudice and discrimination aimed at Muslims — in the United States.

Highly charged politics in this U.S. presidential election year and the intensity of radical Islamists have forced Muslim community leaders to reorganize themselves to try to counter these sentiments.

The Council on American-Islamic Relations (CAIR) reported that there were 75 attacks on mosques in the United States last year, the highest number ever recorded. The council said property damage and physical intimidation were involved in roughly equal amounts in those hate crimes.

Nearly half of the anti-Muslim outbursts occurred after attacks that Muslim gunmen carried out in Paris on November 13 and in San Bernardino, California, on December 2.

Muslim leaders said mosques were targeted in some areas where no previous attacks had been recorded against Muslim houses of worship, even after the devastating September 11 attacks in 2001.

One of these was in Philadelphia, the fifth-largest U.S. city, where a pig’s head was thrown at the Al-Aqsa Mosque on December 7.

Marwan Kreidie, director of the Arab-American Development Corporation in Philadelphia, has an office in the mosque. The pig’s-head incident — a gesture particularly insulting to devout Muslims, who are forbidden to eat pork — was an “extremely isolated” case, he said, “something completely unexpected.”

Mosque leaders immediately cleaned the scene and filed a police report, but no one has been arrested in the past month.

“The incident was a real potent example of Islamophobia — anti-Arab, anti-Muslim feelings — and it really hurt people,” Kreidie said.

Out of prejudice, unity

However, he added, desecration of the mosque may have boomeranged on those responsible, because instead of inflaming hatred against Muslims, members of all religious faiths in that Philadelphia community were united in condemning the attack, and they came together in a ceremony where they exchanged wishes for peace and shared food.

The same day that the mosque was attacked, Republican presidential candidate Donald Trump delivered his first speech demanding a “total and complete shutdown” of U.S. borders to all Muslims trying to enter the country.

Trump said his decision to call for a ban on all Muslim visitors was triggered by the mass shootings in Southern California five days earlier, where American-born Syed Rizwan Farook and his wife, Tashfeen Malik, a Pakistani national, shot 14 people to death at a Christmas party attended by Farook’s co-workers.

The morning after Trump’s speech in South Carolina, police in Grand Forks, North Dakota, informed Ilham and Omar Hassan that their restaurant had been set afire overnight. The attack on Juba Restaurant and Coffee was recorded as a hate crime.

Ilham Hassan and her family, refugees from Somalia, had been operating the restaurant, and an adjacent halal butcher’s shop selling meat prepared according to Islamic standards, for about year. Sales had been increasing, and they were expanding the business.

The Hasans were already acquainted with anti-Muslim feelings. On the day after the killings in San Bernardino, graffiti featuring the Nazi swastika symbol and the words “go home!” were sprayed on their window.

A 25-year-old white American, Matthew Gust, has been arrested and charged in connection with the arson attack, but authorities said it wasn’t clear whether the graffiti incident was related to the firebombing of the restaurant.

Hassan said it was clear to her that both incidents were carried out “by someone with hatred.”

Damage to the restaurant was estimated at $90,000, possibly more. But Hassan insisted that the family was not going anywhere and would stay in North Dakota.

Jaylani Mohamed Hussein, head of CAIR’s chapter in the northern U.S. state of Minnesota, said, “We believe there are many incidents that have not been reported. In Minnesota, we have noticed a great deal of bullying taking place in schools” after the controversial comments by Trump. Muslim parents and their children have reported that other students have been “taking advantage” of the stormy public comments about Muslims to spread similar sentiments in schools.

But Trump’s anti-Muslim speech has had an effect beyond U.S. schools, restaurants and mosques.

Late in December, the Islamic extremist group al-Shabab, based in Africa, released a video featuring Trump, evidently intended to help recruit American Muslims to their cause. The video included images of U.S. police beating or shooting black males, suggesting that American blacks could find solace in Islam.

The video shocked the U.S. Muslim community. In Minneapolis, for instance, activists hastily arranged a meeting and urged their members to counter the messages it carried.

Abdirisak Bihi, one of the organizers, said: “It’s a very desperate situation that they have to use a long and highly dramatized violent video to make recruitment, but I don’t think there is appetite for that among young people in our community anymore.”

Bihi’s nephew, Burhan Hassan, accepted an earlier recruitment pitch and joined al-Shabab in Somalia, where he later died. He also was featured in the propaganda video.

Bihi worries about the effect al-Shabab’s message may have on the community of Somali Muslims in the United States. “What I’m really concerned about is that they might scare our mainstream community again,” he said, and make the older generation “more fearful of our young people.”

Divisions with the Somali community in the U.S. could result in “more unemployment and more anger in our young people, and that is how they [al-Shabab] recruit,” he said.

Trump shrugged off criticism of his comments, as well as the use of his remarks in al-Shabab’s propaganda message. “I have to say what I have to say,” he told questioners.

Marwan Kreidie said words and negative tones have consequences: “These politicians should be more mature. They should understand that words have consequences. We need people in leadership positions to make sure they don’t accept any form of anti-anything — Islamophobia, anti-Semitism, anti-black, whatever.”