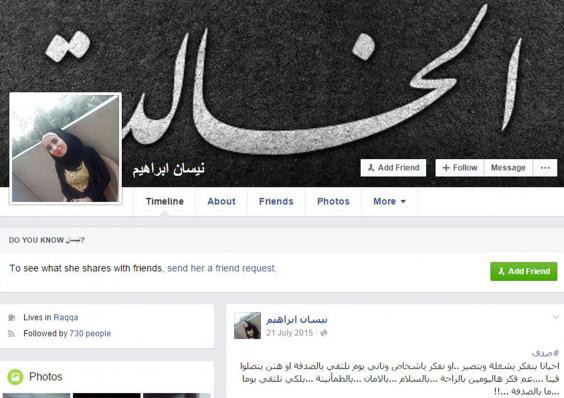 The Islamic State group has executed what is believed to be the first female citizen journalist for reporting inside its territory, Syrian activists reported.

Ruqia Hassan, 30, wrote about daily life in Raqqa, IS’s Syrian stronghold and the frequent target of coalition airstrikes against the group. Her frequent Facebook posts appeared under the pen name Nissan Ibrahim.

The exact date of Hassan’s execution is unknown, but her presence on social media stopped abruptly in July 2015.

News of her death was confirmed this week by Raqqa is Being Slaughtered Silently (RBSS), a group exposing human rights abuses from within Syria.

RBSS founder Abu Mohammed tweeted Hassan’s last known message: “I’m in Raqqa and I received death threats, and when #ISIS [arrests] me and kills me it’s ok because they will cut my head and I have dignity its better than I live in humiliation with #ISIS.”

Hassan was an independent reporter who studied philosophy at Aleppo University and joined the opposition to Syrian President Bashar al-Assad’s government when the revolution began in Raqqa.

After IS entered the city, she refused to leave and began reporting on the human rights abuses occurring there.