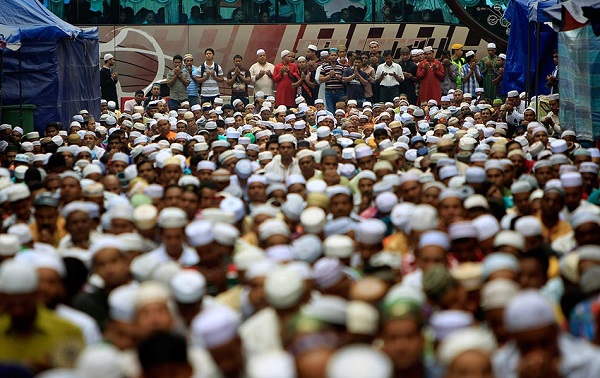 People in Muslim countries in 2013 had an average life expectancy at birth of 67 years – four years below the global average. In 1900 average life expectancy was only 31 years. Under the medieval Islamic Caliphate, however, general life expectancy was relatively high, above 35 years. This is greater than longevity estimated for medieval English peerage (30 years).  The figure above indicates a relatively high level of Muslims’ well-being under the Caliphate. Many citizens then lived into their 50s and 60s after surviving infancy.  What reduced these historical figures were the high infant mortalities.

The longevity seen for the Islamic civilization was a consequence of Islamic teachings emphasizing good health. Prophet Muhammad (Peace be upon him) said in a hadith that “Cleanliness is half of the faith (Iman)”.  He instructed the faithful to regularly clean their teeth, bathe, and wear clean clothes.  Further, for Muslims, saving lives is one of the higher objectives (maqasid) of the Shari‘ah as is emphasized in the Qur’an (5:32): “anyone who slew a person – unless for murder or spreading mischief in the land – it would be as if he slew the whole people; and if anyone saved a life, it would be as if he saved the life of the whole people”.  Further encouragement towards good health is provided by the hadith: “Every illness has a cure, and when the proper cure is applied to the disease, it heals by Allah’s Will”.  Medical knowledge grew rapidly as illustrated by the extensive tomes written by such illuminaries as ar-Razi, and Ibn Sina.

Other Islamic values conducive towards longevity include seeking moderation (wasatiyyah), caring for aged parents, and avoiding excessive consumption.   The relatively high longevity of the early Caliphate period is unsurprising when considering attributes of Islamic governance: Rule of law providing for security; and emphasis on provision of education, clean water and sanitation, and caring for the ill and aged.  Medieval Muslim cities greatly outstripped European counterparts with their public facilities.

Water is critical for Muslims from the necessity for clean drinking water and ablutions. Surface water was transported to cities via aqueducts and canals, while underground water was tapped using wells and qanats (underground canals). Large mosques had ablution areas and lavatories.  In cities water was carried to public fountains, and urban quarters had bathhouses.  Advanced sanitation systems were widespread. At Fustat, Egypt, even simple 2-3 room houses had latrines.  In many high-rise multi-storey buildings latrines were placed on each floor with flues constructed within the walls and connected with underground canals to communal cesspits.

Hospitals appeared in 9th century Baghdad and spread quickly. The Nuri hospital in 12th century Damascus, had druggists, orthopedists, and oculists. Ibn Jubayr, a 12th century traveler, observed them in most cities and declared that hospitals were one of “the finest proofs of the glory of Islam”. The 9th century Ahmad ibn Tufal Hospital in Cairo contained a bathhouse each for men and women, a library, and psychiatric wing. The founding constitution of the 13th century Al-Mansuri hospital, Cairo, read, “[The hospital’s] duty is to give care to the ill, poor, men and women, until they recover.  It is at the service of the powerful and the weak, the poor and the rich … without demand for any form of payment, but only for the sake of God.” The magnificent hospitals of Damascus and Cairo inspired the crusaders. The first European hospital was established by Louis IX in Paris after his return from the Crusades.

Surprisingly, many countries today that have the lowest life expectancies are Muslim countries, despite showing high Islamicity levels such as praying five-times daily.  However, the inculcation of Islamic civilization values related to achieving longevity has been neglected.  Muslims should re-emphasize Islamic values so as to change the mindsets of individuals, as well as to establish facilities that engender good health and well-being for all.