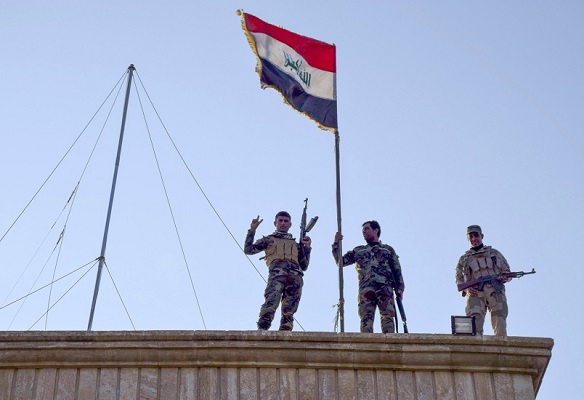 The fall of Ramadi in May was a big blow to Prime Minister Haider al-Abadi’s government and military as they struggled in their campaign to push back against the militants.

But after Monday’s success in the latest offensive to retake Ramadi, Abadi went on Iraqi television to declare 2016 will be the year Islamic State will be driven out of Iraq. He said the country’s second largest city is the army’s next target.

“We are coming to liberate Mosul and it will be the fatal final blow to Daesh (Islamic State).”

Islamic State has held Mosul since June 2014 when the group swept through large areas of northern and western Iraq and eastern Syria.

Iraqi forces, backed by U.S.-led coalition airstrikes, were long stalled in their efforts to retake territory, but have made recent gains.

Kurdish forces have also had success in clearing areas north and east of Mosul, yet have been careful not to move beyond their traditional territory.

Iraqi Finance Minister Hoshiyar Zebari expressed the need for the Kurds to help retake Mosul, a largely Sunni city, telling Reuters the Peshmerga fighters are a “major force” and will be necessary in that battle. Zebari said given the size of the area that must be secured around the city, the operation may also require local Sunni fighters and Iran-backed militias.

In Ramadi, Jubilant Iraqi fighters raised the flag over the government headquarters in the center of city on Monday, while others waved their weapons as they danced and paraded through the streets in the capital of Anbar province.

Iraqi officials said the next step is to wipe out any pockets of resistance and clear Ramadi and its surroundings of the countless mines and booby traps Islamic State left behind.

The number of dead and wounded on both sides was unclear and most civilians had taken cover inside a hospital.

The United States, while hailing the success Iraqi forces have shown in Ramadi, stopped short Monday of declaring the city liberated.

“The continued progress of the Iraqi security forces in the fight to retake Ramadi is a testament to their courage and determination, and our shared commitment to push ISIL (Islamic State) out of its safe-havens,” the White House said.

Just as the White House did, Defense Secretary Ash Carter would only call Monday’s developments in Ramadi “progress” in retaking the city.

Secretary of State John Kerry said “the Iraqi military is fighting with determination, courage, and skill to dislodge the enemy and bring closer the day when the city can be returned to the families who have fled the terror of ISIL.”

After months of preparation, Iraqi forces backed by U.S.-led coalition airstrikes pushed into Ramadi’s center last week in a concerted effort to recapture the city.

The U.S. military said it carried out at least 29 airstrikes on Islamic State targets in the past week; three airstrikes hit near Ramadi from Sunday into Monday, wounding 12 IS fighters.

Col. Steve Warren, U.S. spokesman for the anti-IS military operation, said that since May, the coalition had launched 630 airstrikes in and around Ramadi and trained some of the Iraqi forces that took the city back.

Video of Ramadi’s city center and other nearby districts showed widespread destruction, and many neighborhoods appeared to be in ruins.

One military commander told state TV that IS militants had booby-trapped many buildings and attacked his men with car bombs.

Gen. Abdel Ghani Al Assadi says that his men made sacrifices and many gave up their lives in the bitter battle against Islamic State.

James Denselow of the London-based Foreign Policy Center tells VOA that the success of the Ramadi operation will be measured by whether Sunni residents return to the city:

“Ultimately, for Sunni residents to come back, they need to feel that there is a force there that will protect their interests. [That] there’s no victor’s justice… All these other things we’ve seen in the past in other liberated cities, and there are a huge number of different armed groups operating under different flags in Iraq at the moment, and that’s not good for a united Iraq,” he said.

But Denselow warns that the fact that “a relatively small number of ISIS fighters have been able to fend off a much larger force for so long with such a large level of destruction is a worrying portent of things to come.”