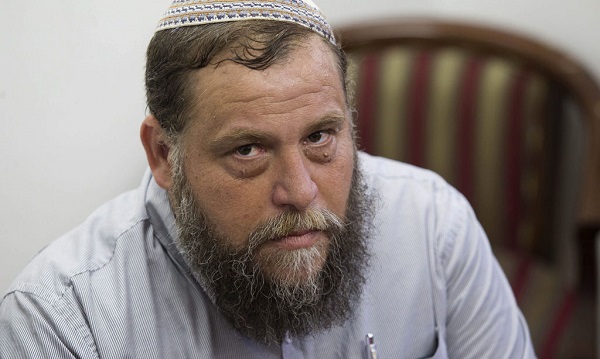 epa04880044 Ultra Zionist Bentzi Gopstein, Chairman of the Israeli far-right wing organization 'Lehava' (Flame), during a press conference in his lawyer's office in Jerusalem, Israel, 11 August 2015. Local media reported that the Vatican had asked the Israeli Supreme Court to prosecute Gopstein for allegedly calling on churches in Israel to be burned. Gopstein was arrested and interrogated by Israeli Police on 11 August. EPA/ABIR SULTAN

“Christmas has no place in the Holy Land,” insists Benzion Gopstein, the leader of a far-right Israeli group that has indirectly received support from the government.

According to Gopstein, Christians are “vampires and blood suckers” that must be expelled from Israel, the U.S.’ closest ally. “Let us remove the vampires before they once again drink our blood,” he wrote in a recent article on an ultra-Orthodox website.

Gopstein, a religious extremist also known as “Benzi,” calls “the Christian Church” Jews’ “deadly enemy for hundreds of years,” which has used “the maximum tools at its disposal to destroy the Jewish people.”

He laments that the “disgust” for Christianity “has disappeared with the ‘good life’ of the democratic age.”

Leading Israeli newspaper Haaretz reported on Gopstein’s remarks. It also noted that the Israel Movement for Reform and Progressive Judaism and the Coalition Against Racism have asked the government to investigate.

Gopstein has a long history on the far-right of Israeli politics. In the past, he has publicly insisted that setting fire to Christian churches in Israel is justified.

His group Lehava, whose name is a Hebrew acronym for “Preventing Assimilation in the Holy Land,” has frequently been called “fascist” and “radical right-wing.”

Lehava is infamous for violently harassing and threatening Israeli Arabs who are in relationships with Israeli Jews. In the name of fighting “harassment,” the far-right group created racist beach patrols in order to prevent Jewish women from interacting with Arab men.

Its members have also set fire to and vandalized the few remaining bilingual Hebrew-Arabic schools in Israel, and yet are often not charged with hate crimes.

The group has additionally organized boycotts of businesses that employ Palestinians, and has protested against Jews who rent housing in Israel to Palestinians.

Holocaust survivors have warned that Lehava reminds them of the horrors of fascism they experienced.

Many of the group’s members, including Gopstein, are followers of Meir Kahane, an Israeli-American fascist leader who founded the extremist Jewish Defense League, which is considered a “right-wing terrorist group” by the U.S. government and a “radical organization that preaches a violent form of anti-Arab, Jewish nationalism” by leading hate group monitor the Southern Poverty Law Center.

Posts on Gopstein’s Facebook page include pictures of some of the few Arab lawmakers there are in Israel that were photoshopped to look like they are being hanged.

Far-right Israeli-American extremist Baruch Goldstein massacred 29 Muslim civilians and injured 125 more at the religious site the Cave of the Patriarchs in Israel in 1994. Lehava and other radical right-wing Israeli organizations consider Goldstein — who, like them, was a follower of Kahane — a hero. At a 2010 ceremony honoring the mass murderer, whom the Israeli government considers a terrorist, the Lehava leader said Goldstein “avenged the enemies of the Jews. We are here to honor his legacy.”

Ties to the government

Despite its violent extremism and a recent crackdown by authorities in the country, nevertheless, Lehava has ties to the Israeli government.

Non-profit, non-partisan organization the Institute for Middle East Understanding (IMEU), which has compiled a fact sheet on Lehava, describes the group as “state-sanctioned incitement.”

A May 2011 investigation by Haaretz Magazine found that Lehava’s leaders and prominent activists are connected to Hemla, an Israeli government-funded non-profit organization that advocates against Jewish-Arab miscegenation and supports settlers in the illegally occupied West Bank.

Haaretz noted that, in 2011, Israeli lawmaker Tzipi Hotovely — a prominent member of Prime Minister Benjamin Netanyahu’s right-wing Likud party, who now serves as Israel’s deputy foreign minister — invited Gopstein to testify in Israel’s parliament, the Knesset. Gopstein warned lawmakers about miscegenation, and called for them to bring “more talk against assimilation into the schools.”

Miscegenation is technically not legal in Israel, because civil marriages are not recognized by the state; only religious marriages are allowed, and must be overseen by the country’s religious institutions. Non-Jewish citizens of Israel, therefore, cannot legally get marry Jews; they must travel outside of Israel to wed.

Yet Israel and its supporters frequently say that Israel protects the rights of people of other religions. The relative impunity that many radical groups like Lehava, or violent settler extremists like those who killed the Dawabshe family in the occupied West Bank, have contradicts this assertion. Christian churches are constantly targeted by arsons and vandalism in Israel, and yet the culprits rarely face serious, long-term punishment.

Israeli human rights organization Adalah has documented more than 50 laws that directly discriminate against non-Jewish citizens of Israel. Palestinians, and those of other ethnicities and religions, have long said they feel like second- or even third-class citizens in the closely U.S.-allied country.