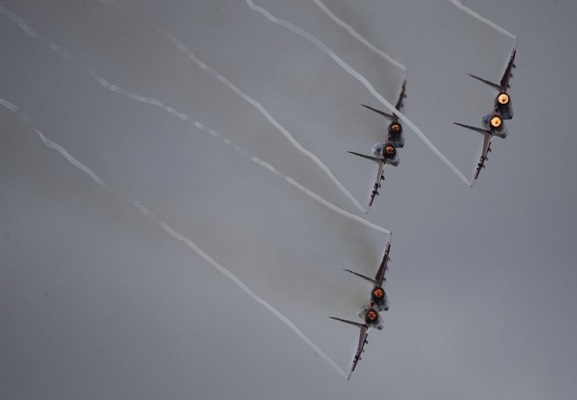 Russia denied as “fake information” accusations made on Wednesday that its air strikes in Syria have killed hundreds of civilians and could be treated as war crimes.

In a new report, Amnesty International said Russian air raids had killed at least 200 civilians and about a dozen fighters in Homs, Idlib and Aleppo provinces between September and November.

“Russian air strikes in Syria have killed hundreds of civilians and caused massive destruction in residential areas, striking homes, a mosque and a busy market, as well as medical facilities in … attacks that show evidence of violations of international humanitarian law,” Amnesty said.

The London-based group also said there was “evidence suggesting Russia’s use of internationally banned cluster munitions and of unguided bombs in populated residential areas”.

“We familiarised ourselves with the contents of this report and as usual, there is nothing concrete and nothing new published in it,” he said.

Konashenkov also denied the claims that Russia was using cluster bombs in Syria.

Neil Sammonds, Syria researcher for Amnesty, told Al Jazeera the group’s report was based on interviews with witnesses and survivors, as well as video evidence and images showing the aftermath of attacks.

“It will be interesting to know from Russia what more evidence they would like because there is a tonne of evidence at their doorstep that they have committed probable war crimes and they have not stood up to that at all,” said Sammonds.

Russia began its aerial campaign in Syria on September 30 to support its ally President Bashar al-Assad.

Moscow says its target is the Islamic State of Iraq and the Levant (ISIL) and other “terrorists”, but rebel forces and their backers accuse Russia of focusing on moderate fighters instead.

Russia’s defence ministry said on Wednesday its air force carried out 302 sorties in Syria between December 18 and 23, hitting 1,093 ISIL targets.