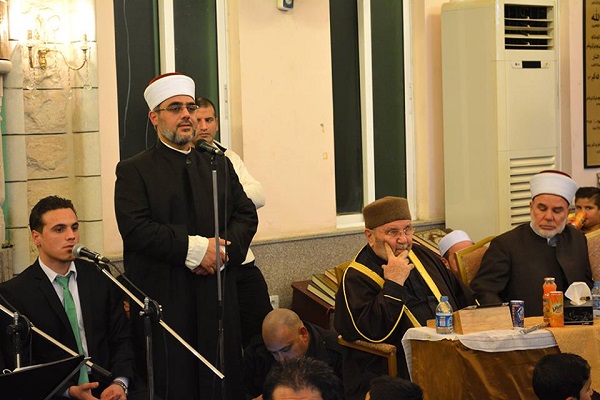 Senior Islamic scholars at a Mawlid gathering in Amman, Jordan

“We’re witnessing a one of a kind phenomena that haven’t occurred for a long time, as prophet Muhammad’s birthday celebrations coincide with the birth of Christ (Christmas) for 2015”, said the Egyptian head of Astronomy department in National Research Institute of Astronomy and Geophysics, Ashraf Tadros.

The “Mawlid” or Prophet Muhammad’s birthday anniversary occurred in January 3rd 2015, and it’s set to happen again on 24th December 2015, in an event that’s repeated once every 33 years, as the solar year exceeds the lunar year by 11 days.

The “Mawlid” is a yearly celebration for most Muslims in Islamic countries, as they celebrate the birth of the Islamic prophet, Muhammad. The celebrations aren’t considered a religious festival, but it’s merely a yearly reminder of the prophet. During these celebration people hold sessions where poems of the prophet’s praise are recited, as well as learning from his biography and mentioning his merits, accompanied by offering food and deserts, most notably the “Mawlid’s deserts.” These deserts originated in Islamic countries especially Egypt during the month of celebrating the Prophet’s birthday, it has many shapes and kinds and it’s connected to the “Mawlid”

Most Muslims attribute celebrating the “Mawlid” to the prophet Muhammad himself, who had a a a tradition of fasting on a specific day saying that “this is the day I was born.” It’s also noted that the first country to hold big and organized celebrations of the Prophet Muhammad’s birthday anniversary is Iraq.

In Egypt, the “Mawlid” is one of the biggest religious-related celebrations as mosques get decorated through the month of celebration especially for that occasion. “Mawlid’s deserts” set Egypt apart in celebrating the “Mawlid,” and besides the deserts, Egypt is famous for making sugar horses for boys and candy dolls for girls, which over the years was modified to be plastic horses and dolls as toys related to the occasion.