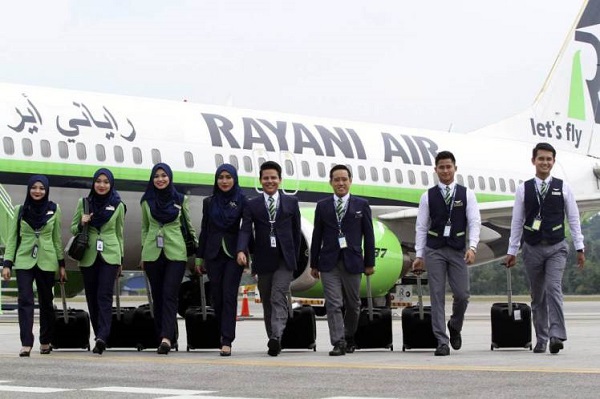 epa05077468 A picture made available on 21 December 2015 shows Rayani Air the Malaysia's first Islamic-compliant airline cabin crew posing for a photograph in front of a Boeing 737-400 at Kuala Lumpur International Airport 2, in Sepang, Malaysia, 20 December 2015. The airline will not consent any pork or alcoholic beverages on board and Islamic prayers will be conducted before every flight for the safety of the crew and passengers. Muslim crew members will be obliged to cover their heads and non-Muslim members of the crew are required to dress decently in accordance to Shariah requirements. EPA/AFIQ RAZALI MALAYSIA OUT

Malaysia’s first Shariah-compliant airline Rayani Air is scheduled to begin operations on December 20, with its maiden flight from Kuala Lumpur International Airport to its home base in Langkawi.

Local broadcaster Astro Awani reported Rayani Air managing director Jaafar Zamhari as saying that the airline, which he said is full service like national carrier Malaysia Airlines, only serves halal food and does not serve alcohol.

“It is compulsory for our Muslim women cabin crew to wear hijab and for non-Muslim to wear a decent uniform,” Mr Jaafar was quoted saying at a press conference yesterday.

“We also recite doa (prayers) before the departure of each flight, we have a ‘no-alcohol’ policy, and we provide food and beverages that are halal,” he added.

Mr Jaafar also reportedly said Rayani Air was not a low-cost carrier nor was it a hybrid airline, despite a description about the airline on its website that called it the “latest low cost carrier from Malaysia that puts the customers first”.

According to Mr Jaafar, Rayani Air will, for a start, fly to Langkawi, Kuala Lumpur, Kota Bharu, Kuching and Kota Kinabalu.