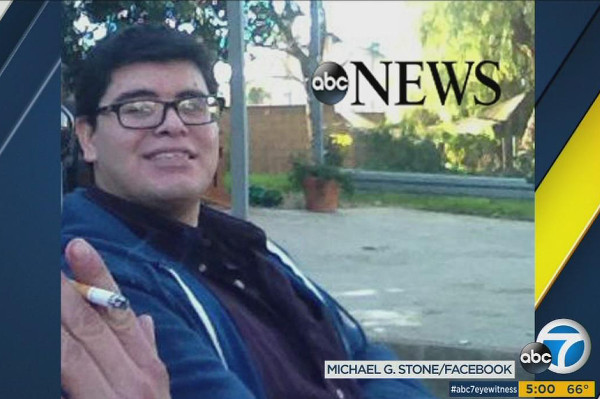 By: Amanda Holpuch and Soo Youn

The friendship began in a southern California garage and ended with one person dying in a police shootout and the other taken into the custody of the US government.

The decade-long friendship between Enrique Marquez and San Bernardino shooter Syed Farook, who with his wife, Tashfeen Malik, killed 14 people on 2 December, is detailed in a criminal complaint filed in federal court that shows key events leading up to the shooting.

Marquez, who had met Farook when they were neighbors in Riverside, California, is facing charges for making false statements in the acquisition of firearms, marriage fraud, and conspiring to provide material support to terrorists.

Marquez and Farook had spent time devising attacks on State Route 91 and on Riverside Community College, a school they both attended. They would go to firing ranges together in anticipation of the attacks and there was even a time in 2011, when Marquez spent most of his time at Farook’s home, where they would listen to lectures and watch videos about radical Islam.

Marquez, 24, had a “sham marriage” to one of Farook’s relatives, who lived in a different city with her boyfriend, the father of her daughter, the documents say.

Investigators also gained insight into the mental state of Marquez from a conversation thread from his Facebook account on 5 November.

“No one really knows me,” he wrote. “I lead multiple lives and I’m wondering when its all going to collapse on M[e].”

Marquez appeared at the federal district court in Riverside on Thursday. He is scheduled to return to court on Monday for a detention hearing and will enter a plea on 6 January.

Marquez’s mother, Armida Chacon, spoke to reporters on Thursday. She said her son, a security guard, had been friends with Farook and was a good person. On Friday, Chacon told reporters to stay off her property, refusing to comment about her son. Marquez’s younger brother also declined to comment.

The Bureau of Alcohol, Tobacco, Firearms and Explosives had visited her home to ask about Marquez. This inspired Marquez, who told clinicians that he didn’t normally drink, to finish nine bottles of beer.

On the day of the shooting, Marquez worked his normal shift as a security guard at a nearby Walmart, finishing at 4pm. Within hours of the shooting he became increasingly distressed and ended up about 50 miles west, in one of the South Bay Beach towns, a law enforcement source told the Guardian. From there he called 911, and told the dispatcher he was suicidal.

The operator asked Marquez “why do you feel like you want to kill yourself”?

“I don’t know,” Marquez replied. “My neighbor. He did the San Bernardino shooting.”

The conversation continues and Marquez, at one point, says: “The f—–g asshole used my gun in the shooting.”

The two continued talking, and Marquez asked: “Why did he have to do it?”

Marquez was eventually referred to a psychiatric ward and later placed on an involuntary hold for 72 hours. After he was released from the hospital he was interviewed by federal agents for the next 11 days. Each day, he waived his right to a lawyer and his right to remain silent every day in writing, the affidavit states.

“Mr Marquez conspired with Mr Farook to commit vicious attacks, as set forth in today’s charges,” said US attorney Eileen M Decker in a statement following the appearance at Riverside federal court on Thursday. “Even though these plans were not carried out, Mr Marquez’s criminal conduct deeply affected San Bernardino County, Southern California and the entire United States when the guns purchased by Marquez were used to kill 14 innocent people and wound many others.”

Decker said there is no evidence that Marquez had any advanced knowledge of the San Bernardino shooting.

On the day of the shooting, Farook placed an IED on a table at the center where the shooting took place, according to the affidavit.

Marquez had purchased explosive powder, which was later found in Farook’s home. Marquez allegedly told investigators that he and Farook had reviewed instructions in Inspire, al-Qaida in the Arabian Peninsula’s official publication, to get information on how to make IEDs.

But the FBI said in 2011 and 2012, Farook and Marquez planned attacks that were not carried out. Marquez told investigators that the planned attacks were meant to “maximize the number of casualties that could be inflicted”.

The men purchased firearms, tactical gear and ammunition in anticipation of these attacks, according to the affidavit.

Investigators said Marquez bought weapons for Farook – a sport rifle in November 2012 and an A-15 rifle in February 2012. Marquez also purchased explosives at this time – “in furtherance of his and Farook’s plans to create bombs and commit mass killings”, according to the affidavit.

The FBI said Farook introduced Marquez to radical Islam after Marquez became a Muslim in 2007.

“Over the next few years, Farook provided Marquez with radical Islamic materials, and by 2011, Marquez spent most of his time at Farook’s residence listening to lectures and watching videos involving radical Islamic content,” the FBI’s statement said. But members of his local Islamic center have said he was not religious, rarely came to the mosque and drank regularly despite Islam’s prohibition of alcohol.

Marqeuz recently worked as the doorman at a local bar, where the owner described him as “emotionally immature” and into comic books.

A couple of months before the shootings, Marquez bought magazines and comic books from True Collectible, a store in the same strip mall as the dive bar in which he worked. “He probably spent about $10 to $20,” owner Jase Anzo said. “He was friendly, seemed like a normal guy. I don’t remember anything sticking out.”

But others say there was something a little off. “We weren’t friends. He seemed kind of creepy,” said musician Willie Carter, who knew Marquez through the local punk rock scene and saw him frequently at the home of a mutual friend. “He was soft-spoken but seemed like he was trying too hard to fit in.”

Marquez was fired from another job, as a Walmart security guard, after investigators publicly linked him to the shooters.

County records show that he married Mariya Chernykh, a Russian immigrant who came to the US on a J-1 “cultural exchange” visa, in 2014.