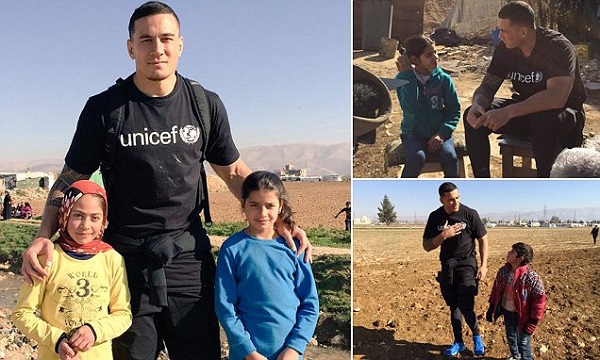 Sonny Bill Williams spent his first day of a whirlwind trip to Lebanon getting to know the most vulnerable victims of the Syrian refugee crisis – the children.

Among them was Fatima, a girl who escaped to Lebanon from Syria with her parents and four brothers two years ago.

She had been left traumatised after seeing her best friend die in a bombing while they were walking together back in Syria.

At the Saadnayel informal settlement in Faida, Bekaa Valley, Unicef ambassador Williams met Fatima’s family, hung out with her and her school friends, and visited her school room, which is a few tents put together on the settlement grounds.

Music has helped Fatima overcome her horrific experience and she took the opportunity to sing to Williams with her school friends on his visit, breaking into a smile when the sportsman joined in.

Maidaborn said while she was visiting the settlement, she met a 16-year-old girl who had been forced into an abusive marriage which had put an end to her education.

Her husband had divorced her and she had returned to the camp.

“I was touched by her girlish enthusiasm to be back at the school and among her friends and family,” Maidaborn said.

“She was more like a girl than a young woman who’s been divorced and suffered.”

Unicef is working to adapt their education programme to accommodate this new wave of tragedy within the crisis: the young girls who’ve been married and need to find a way to continue learning.

But Maidaborn said equally upsetting was learning that many of the boys who fled Syria because of the violence and turmoil were now returning to join the army.

“With limited education and no work opportunities in Lebanon, young men have very limited options,” she said.

“They see their fathers unable to work, frustrated and humiliated.  They see their mums struggling with work, kids and the endless daily chores of water, cooking and firewood.

“They see their sisters married into abusive relationships when they are just young girls.”

The boys who return and sign up to fight are paid US$500 a month, and send the money back to their family in the camps.

“They risk their lives in order to help their families get through the daily struggle of life in the settlements of Lebanon.”

Unicef is live blogging the tour, with updates available here.

* Fairfax NZ is teaming up with Unicef this Christmas to help raise money for the child refugees of the Middle East. Please help us support their efforts to improve the lives of the hundreds of thousands of children who are trying to escape the ravages of war and famine.

To donate please text SBW to 2923 to donate $3 or visit https://www.unicef.org.nz/sbw. You can get live updates from Sonny Bill’s trip to Lebanon all week at Stuff.co.nz.