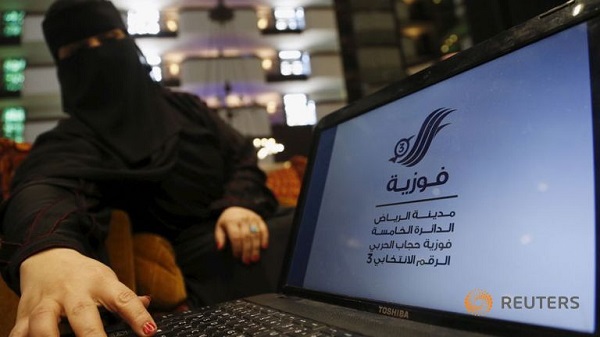 RIYADH – Saudi Arabian women are running for election and voting for the first time on Dec. 12, but their enfranchisement marks only a pigeon step towards democracy and gender equality in the autocratic Islamic kingdom.

“For 10 years, since men first voted, we have waited for this chance,” said Fawzia al-Harbi, one of hundreds of female candidates who began campaigning this week. “Now they have given it to us I decided I have the ability to do it.”

Fully veiled apart from her eyes and hands and with male chaperones at her side, she met potential voters in a Riyadh shopping mall. Only a fraction of them actually will go to the polls however, and the councils they will choose will have little power.

The ruling Al Saud dynasty has no intention of sharing power with elected politicians, say analysts, and it fears combative campaigns or rapid social reform could unleash unrest in a patriarchal state with deep tribal and religious loyalties.

While top princes privately discuss the possibility of eventual elections for the Shura Council, the appointed parliament that discusses new laws and advises the government on legislation, it is still seen as a distant prospect.

But political liberalization is edging forward, pressed by a powerful business class that supports modernization and the growing number of educated and working women and their families, and prodded by Western allies.

“The Al Saud recognize the need for change. They started with the municipal elections. Now it is for a majority of seats and they let women vote. They don’t discuss it publicly, but in private they talk about elections for the Shura Council,” said Khaled al-Dakhil, a Saudi political scientist.

The introduction of women into public life and gradual moves towards electoral politics were won in the face of stiff opposition from the religious establishment –   the conservative clerics upon whose support the Al Saud rely for legitimacy.

While the clergy has always – eventually – gone along with reforms pushed by the Al Saud, its opposition has sometimes legitimized a conservative backlash, such as the riots that followed the introduction of girls’ education in the 1960s.

Opening the door to evil

In Saudi Arabia’s gender segregated society, campaigning is difficult. The owners of the mall, one of the only public spaces in Harbi’s electoral district, were worried the religious police would complain if she spoke to men.

As her male campaign team, a social networking and website company she found online, negotiated with the management, Harbi stood at the end of the corridor, observing social proprieties.

Saudi Arabia is the only country to bar women from driving and requires them to have a male “guardian” who can stop them travelling, marrying, working or having some medical procedures.

The Grand Mufti, the most senior cleric, wrote in a web posting in 2011 shortly before the late King Abdullah announced women would take part in this election that allowing women to participate in politics was “opening the door to evil”.

However, Abdullah appointed 30 women to join the 150-member Shura Council in early 2013 and their participation in discussions has put difficulties faced by women on the agenda, said one of them, speaking anonymously.

One recent proposal would allow mothers, as well as fathers, to get a document necessary to register births and to enroll children in schools, approve medical procedures and perform other basic tasks that now need the approval of a man. It has
been approved for formal study, said the council member.

This year’s national election differs from the two run in 2005 and 2011 by giving voters the power to elect two thirds of council members instead of half.

However, political parties remain banned and, in a sign of how far the Al Saud want to keep any whiff of national or ideological politics from the poll, several candidates with histories of activism have been barred from running.

Candidates are not allowed to deploy religious or tribal symbolism, cannot use their photographs on election material, and are barred from working together. They campaign purely on the basis of published biographies and promises on local issues.

What alarms the Al Saud is the emergence of any recognizable bloc, such as Islamists affiliated with the Muslim Brotherhood, that could challenge its power, or that campaigns would push divisive tribal, religious or social issues.

An Islamist activist, who did not want to be named, dismissed the councils as being so insignificant that the vote did not warrant the term ‘election’. “Is this going to change power? We need a real election,” he said.

One place where the performance of elected councils has been particularly watched is Qatif, the only municipal district where a big majority of residents are Shi’ite Muslims, Saudi Arabia’s minority sect that has long complained of discrimination.

Jafar al-Shayab, a Shi’ite who was elected to the Qatif council in 2005, and was then appointed as its leader in 2011, said it had had mixed success in meeting voter expectations.

While it had created a new channel for communication between citizens and the government, and given a measure of oversight of the municipality, which is a main provider of state services, entrenched bureaucracy made it hard to get things done, he said.

He cited the example of efforts to coordinate public works for Qatif residents tired of roads being dug up by different departments on successive weeks. “They failed to do anything in that regard,” he said.

On the other hand, the council did help persuade the government to deal with Qatif independently instead of treating it as part of Eastern Province. That helped it gain a bigger budget and more control of spending, he said.

The relative lack of powers is evident in the low number of Saudis who have registered to vote. Of a population of 20 million, 1.74 million men have registered and only 130,000 women. Of the 7,000 candidates cleared to run, 978 are women.

Outside the mall, Harbi approached a family group of five women and spoke about local problems, her plans to open family centers and improve services, and the experience that had led her to stand.

They listened, laughed and entered into the discussion. But when asked if they had registered to vote, they said no.