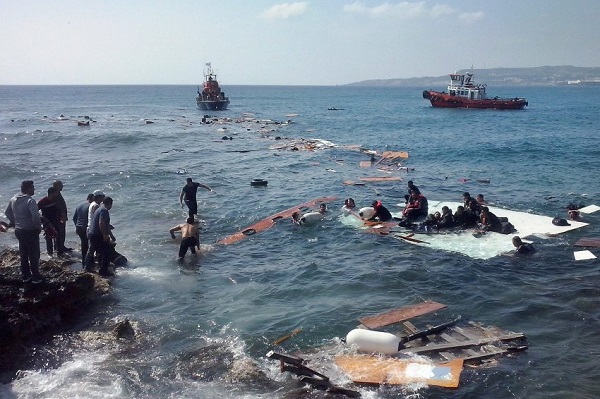 epa04713139 Illegal migrants arrving at Zefyros beach at Rhodes island, in Greece 20 April 2015. A ship with 200 undocumented migrants on board run aground at Rhodes central beach Zefyros. Most of the migrants fell into the water and managed to swim safely to the beach with the assistance of the locals. The ship run aground on rocks and according to initial estimations the vessel has severe damages. The bodies of a man, a woman and a child were recovered during a rescue operation. EPA/LOUKAS MASTIS +++(c) dpa - Bildfunk+++

BRUSSELS – To get from Syria to Europe, you need at least $3,000. Some people make it on less, but when traveling as a refugee, money equals safety.

And most people, like 22-year-old Mahmoud in London, remember every penny they spent.

“There are people who don’t have anything when they arrive,” he said Tuesday, counting himself among the lucky ones with something left. “Because they spent all their money getting there.”

More than 700,000 people have applied for asylum in Europe this year, but there are no reliable statistics detailing who came from where or how many people are actually on the continent after fleeing wars and poverty in the Middle East and Africa.

But one thing is clear: Businesses — both legal and illegal — along the road from Syria to Germany are booming. Even the most conservative estimate of how much cash refugees have spent this year would add up to hundreds of millions of dollars.

Where does the money go?

In Turkey’s port cities, all kinds of shops — even shoe stores and grocery stores— now sell nautical gear, including life vests and plastic holders to protect mobile phones and documents at sea. But even the human smugglers in Izmir, Turkey, a popular launching spot, dismissed the idea that they were taking advantage of suffering people when asked a couple of months ago.

“We are providing a service,” one smuggler said.

And many refugees agreed. With so many people unable to get a commercial ferry (which costs less than $20 from Turkey to Greece) and unwilling to risk their lives going home, the services offered by smugglers remain in high demand.

But those services — rides to Greece in rubber boats that may or may not sink — usually cost a minimum of $1,000.

On the Greek islands, the travelers then load onto a giant commercial ship to Athens that carries thousands of people daily, each paying an average of about $50 a ticket. By early fall 2015, bus companies in Athens had joined in, meeting the boat to bring those same thousands of people to the border for another $50.

By some estimates, a million and a half people will have fled the Middle East and Africa for Europe by the end of the year. They travel on several paths, through Turkey, Libya, Morocco and other countries. But everywhere the refugees and other migrants go, there’s money to be made.

“The refugees spend too much money,” Mahmoud said.

I first met Naseem in September in Croatia, while he and his friends waited in queues for hours, exhausted, trying to get transportation to the Hungarian border.

By that point in his journey, Naseem had spent well more than half of his $3,000 and had yet to reach Hungary, which was considered at the time to be the major hurdle on the road to Western Europe.

His biggest fear: Being forced to go back to Raqqa, a Syrian city controlled by the Islamic State. Now, nearly two months later, he is safe in Germany and hopes to one day continue his studies in computer technology.

The trip was hard, he said Tuesday, but worth every penny.

And small businesses that pop up around refugee camps, such as used clothing markets or traveling food sellers, are — like the smugglers and the transportation companies — providing a service.

“They don’t want people to come here to Europe,” he said. “But once I arrived, they were good to me. I’m happy in Germany.”

But with the backlog of asylum applicants, it takes months to get an official interview to be considered for asylum. Syrians are the “safest” among the migrants because it is assumed they will get legal refugee status, coming from a country that is indisputably at war.

But no newcomers can work before they have papers, and there’s no guarantee they will get them.

And here in Belgium, other recent arrivals are less certain they made the right choice.

After languishing in a camp outside Brussels for a month and a half, 19-year-old Nour said Tuesday that, knowing what he knows now, he might not have come.

“Maybe I’ll feel better about this in the future,” he said. “But so far, I’m unhappy. I thought Europe would be different than this.”