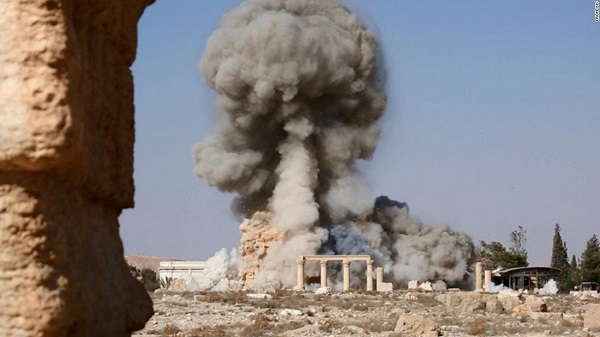 David Cameron made a reasonable case last week for Britain going to war with Isis in Syria; what he did not do is explain how this war is going to be won by Britain or anybody else. Even now, 18 months after Isis captured Mosul, there is a tendency by world leaders to underestimate its political and military strength.

Mr Cameron said that “military action [by the US, UK and others] seeks to degrade Isis’s capabilities, so that Iraqi security forces can effectively secure Iraq and moderate forces in Syria can defend the territory they control”.

It would certainly be nice if that happened, except that the Iraqi state security forces are demoralised, dysfunctional and have had difficulty finding new recruits since they have been repeatedly defeated by Isis over the past two years. In Syria, we are to look to 70,000 “moderate” fighters whose existence Mr Cameron revealed to the House of Commons, but nobody in Syria has ever heard of.

Isis is not going to be defeated by these phantom armies which are to be Britain’s allies in Iraq and Syria. It is the same weakness as in Iraq in 2003 and in Afghanistan a little later – in both cases, Britain was a junior partner in a US-led coalition that pretended to have local allies, but in practice these were too feeble to contribute much.

Does this matter much? After all, the British military contribution in Iraq has been small, some 360 air strikes out of a total of 5,432, and will be equally meagre in Syria. But this misses the point because, since the summer, Isis has extended its strategy of urban terrorism, so long used to slaughter non-Sunni Iraqis, to the rest of the world, as we have just seen in Ankara, Sharm el Sheikh, Beirut and Paris.

Isis is well pleased by the results since it has succeeded in showing its power to the world, by all reports. It is more than likely that it will retaliate against British citizens in response to Britain’s joining the war in Syria. This consideration should not influence British decisions about what to do in Syria and Iraq, but such retaliation should not come as a surprise. Britain is still seen in the Middle East as a great power, whatever its actual status, and Isis is probably pleased that it has joined the roster of its enemies since it knows that British air strikes do not add much to the attack it is facing.

It is extraordinary how Isis has come to dictate the political agenda of a large part of the world. In Britain, its actions and British reaction to them have dominated the news since the killing of Mohammed Emwazi, nick-named “Jihadi John”, on 12 November. This is quite intentional on the part of IS, and one of the attractions of Paris as a target is that it is a news hub. The same would be true of London. In neither city is there any need for IS to make videos of atrocities; it can be sure of wall-to-wall coverage by cameras from every television company in the world. It will also be pleased in Raqqa by the near-hysterical tone of much of the reporting: bad as these mass murders are, they pose no existential threat to France, as the German invasions in 1914 and 1940 did.

The impact of Isis is measured not only in publicity, but in shaping relations between states. Poland and the Baltic states are alarmed to discover that the US and Western Europeans are becoming much more interested in finding a way of cooperating with Russia over Syria than in opposing its actions in Ukraine.

Whatever formal support there was in Nato for Turkey over the shooting down of a Russian aircraft, President Putin’s denunciation of Turkey’s support for extreme jihadis over the past three years has struck home. If there are more Isis mass killings of civilians from Western Europe or the US, pressure for a closer alliance with Russia is bound to grow.

The crisis is increasingly centred on a small part of the Syria where foreign powers and local proxies jostle each other. This is the north-west corner of Syria between the Euphrates and the Mediterranean, and south of the Syrian-Turkish border. It was here that the Russian plane was shot down by a Turkish jet on 19 November and where there has since been intense fighting. The Syrian army, backed by heavy Russian air strikes, has gained control of an important position known as the Turkmen mountain.

Some 10,000 Syrian soldiers are reportedly battling 6,000 Turkmen, the Army of Conquest, and the  al-Qaeda linked Nusra Front (underlining the problem with David Cameron’s 70,000 moderate fighters: the Turkmen might be described as moderate, but they are fighting alongside the Syrian branch of al-Qaeda). The Syrian armed opposition has always depended on the border with Syria being open and, if the Syrian army and the Russians begin to close it, they will have gone a long way towards winning an important victory in the war. Half of the 550 mile-long frontier is already held by the Syrian Kurds.

These parochial struggles are having international implications. It was one of the greatest diplomatic miscalculations in recent history to imagine that the Syrian war would not affect neighbouring states. In the past six months alone, developments in northern Syria have led to a renewed conflict between the Turkish state and the Kurds and to confrontation between Turkey and Russia. Isis will be pleased by both.

Despite all the furious rhetoric after the Paris killings, Isis does not look as if is going to be under pressure that it cannot withstand. Both Russia and Russia’s critics have for different reasons portrayed Russia’s military intervention as being on a larger scale than it really is. It has fewer than 100 fixed-wing aircraft and helicopters operating in support of the Syrian army. This may be enough to reverse the advances by the Army of Conquest (mostly al-Nusra Front and Ahrar al-Sham) which, backed by Turkey, Saudi Arabia and Qatar happened in May. But it is not enough to give a depleted Syrian army the strength to win a decisive victory like the capture of the rebel-held half of Aleppo. The Iranian role also tends to be exaggerated, both by Iran and its enemies. The Pentagon says that there are fewer than 2,000 Iranian troops in Syria and 1,000 in Iraq.

The politics of war in Syria are extraordinarily complicated, and it was probably inevitable that Britain would be sucked into this morass. Everybody agrees that there is no appetite today in Britain for sending ground troops, though this could change overnight if there were a repeat of the Paris massacre in London.

But, if there was such an intervention, Britain, the US and France, would all be hobbled militarily by their contradictory policy of trying to fight extreme Sunni jihadis like Isis and al-Nusra, while maintaining their alliance with powerful Sunni states like Saudi Arabia, Turkey and the Gulf monarchies. This has been the pattern since the US launched its “war on terror” after 9/11, but avoided confrontation with Saudi Arabia and Pakistan.