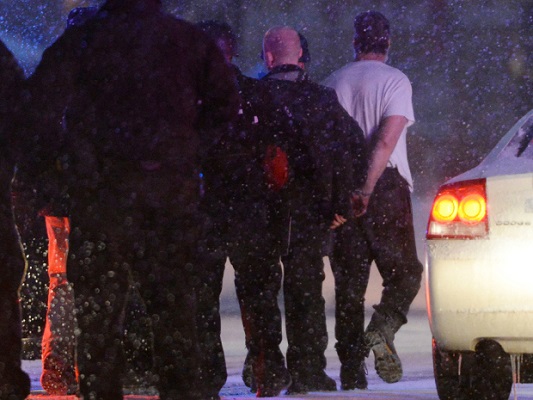 COLORADO SPRINGS – Police in Colorado Springs, Colorado, say they have the gunman in custody after a sporadic five-hour plus shootout at a Planned Parenthood branch that killed a police officer and two civilians.

There had been lots of shooting but no verbal communication until “officers were able to shout at the individual and get him to surrender,” police spokeswoman Lt. Catherine Buckley.

The Colorado police union reported “with great sorrow” that a police officer had died at the hospital. Two civilians also died in treatment. Nine others are still hospitalized.

Once they have cleared the building, police will have to “check out items this individual brought with him,” Buckley said. She added that among the items were propane tanks and other items in bags. Buckley said the investigation, which would have to involve explosive ordinance units, would take hours, if not days.

Buckley had said the shooter had been armed with some kind of “long weapon.”

As snow accumulated at the scene, police had been escorting people away from Planned Parenthood in small groups and hustling them into waiting police cars. Some were dressed in medical scrubs, and none were wearing coats in the frigid weather.

Buckley said authorities were “working through the process” of releasing shoppers and business owners who had sheltered in place in nearby businesses.

Agents of the FBI and the federal Bureau of Alcohol, Tobacco, Firearms and explosives were working with Colorado Springs police. The White House said President Barack Obama received regular updates.

Planned Parenthood is controversial because some of its branches perform abortions, although the bulk of its work involves providing family planning services, screenings for HIV and sexually transmitted diseases, and general health consultations.

“We share the concerns of many Americans that extremists are creating a poisonous environment that feeds domestic terrorism in this country. We will never back away from providing care in a safe, supportive environment that millions of people rely on and trust,” wrote Vicki Cowart, president and CEO of Planned Parenthood of the Rocky Mountains.

In August, about 300 Colorado Springs residents opposed to abortion protested at the Centennial Boulevard clinic as part of a nationwide demonstration over a video that purportedly showed organization employees discussing the sale of fetal tissue. The video has since been discredited.

Some abortion opponents have resorted to violence against U.S. clinics and medical practioners that provide abortion services; several have been hit by arsonists and bombers. At least two doctors have been murdered by anti-abortion activists, the most recent in 2009, when a doctor in Kansas was slain because he performed abortions.