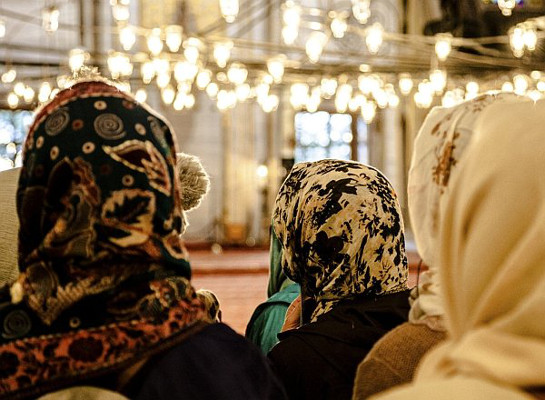 Subjugated, subdued, suppressed, dominated, degraded, disgraced – some of the adjectives wrongly attached to the Muslim woman. Far from it – Islam elevates women to the highest status. I’m not telling you this as an academic, I’m telling you this from my experiences as a Muslim woman living with my family in Lincoln for the past 40 years.

Contrary to common misconceptions, in Islam men and women are equal in their worth in the sight of God. The best proof being that the Qur’an addresses them together; it prescribes the same religious obligations: daily prayers, fasting, giving charity to the poor and pilgrimage to Makkah once in ones lifetime if one is able, it offers the same rewards and it grants the same rights – with very few exceptions to suit their different physique, biological needs or responsibilities.

Women have an equal right to education. The last Prophet, Muhammad (peace be upon him) said, “Seeking knowledge is compulsory for every Muslim (male and female).” The first Divine revelation he received was “Read, in the name of your Lord, who created……..”(Qur’an 96:1). In fact the Prophet Muhammad’s (peace be upon him) wife Aisha was one of the most learned people of her time and men as well as women would travel from afar to learn from her.

No woman can be forced to marry without her consent. The Qur’an indicates that marriage is an equal partnership between man and woman with many verses on marriage such as: “And among His Signs is this that He created for you mates from among yourselves, that you may dwell in tranquillity with them, and He has put love and mercy between your hearts: verily in that are signs for those who reflect.”(Qur’an 30:21)

However their roles may differ, as harmony in family life – highly promoted in Islam – is the foundation of a sound society. The responsibility of financial maintenance and protection of family rests on the man, while its healthy nurturing lies with the woman, but of course a husband and wife can share the roles and help each other.

In dire circumstances, if a marriage does not work, the wife also has the right to terminate it, whereas some religions make divorce the prerogative of man.

As a mother, a woman is held in high esteem and special honour. The Prophet (peace be upon him) said, “Paradise lies at the feet of your mothers,” meaning great reward lies in caring for and respecting one’s mother.

The Qur’an further (17:23) instructs, “Your Lord has decreed that you worship none save Him, and that you be kind to your parents.” Thus in Islam, respecting ones parents, especially the mother, and caring for them in old age is highly important.

Some societies denied women their economic rights until as late as the 20th century. They had no right to ownership of property, wealth or inheritance.

Islam gave women this right fourteen centuries ago! They have the right to work as long as their role as a mother is not neglected and while the occupation is not in contradiction to their faith.

For example the Prophet Muhammad’s first wife Khadija was a very successful and respected business woman. Politically, women have the right of election as well as nomination to office and participation in public affairs. For example when people from the city of Yathrib (now Medina) pledged allegiance to the Prophet Muhammad, he took pledges from women as well as men, showing that he valued the participation of women in public affairs. The dress code for Muslim women is also often misconstrued to be tool of her subjugation when in fact it is symbol of her dignity. Islam requires both sexes to behave and dress modestly.

It is recommended for men to grow a beard and wear loose clothing while Muslim women must also wear loose clothing and cover their hair when going out in public. This is for her own security, dignity and honour; it is to reframe the focus on her from being an object to ogle at to someone respected for her intrinsic worth. Its also great as one doesn’t have to worry about having a bad hair day when going out!

It is unfortunate that we hear of some women in Muslim countries being mistreated. However you must know that oppressing women is clearly not the teaching of Islam! One must study the Qur’an and teachings of Prophet Muhammad (peace be upon him) to judge the true position and rights that Islam gives to women!

As a Muslim woman I have always felt confident and content – I only have to worry about what God thinks about me. My achievements and self worth is not to be judged by a comparison to men and a standard set on the premise that women should strive to compete with men.

Instead the premise of my life as a Muslim woman is the following: Only the One Creator of the Universe is worthy of worship and every effort made willingly and lovingly to please our Creator will reap rewards in the Hereafter – that is a Muslim’s faith. “Whoever works righteousness, man or woman, and has faith, verily to them We will give a new life, a life that is good and pure and We will bestow on such, reward according to the best of their actions.” (Al-Qur’an 16:97)