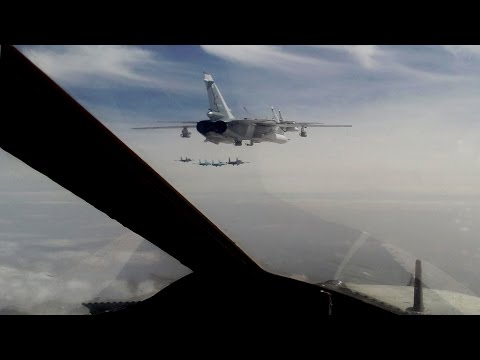 Russian President Vladimir Putin accused Turkey of “stabbing” Russia “in the back” and supporting terrorism after Turkish F-16s shot down a Russian Su-24 fighter jet on border with Syria.

Ankara said the plane was shot down Tuesday after it violated Turkish airspace and ignored 10 warnings in the span of five minutes to leave. Turkish Prime Minister Ahmet Davutoglu stressed his country had the right to act against anyone violating its airspace.

Putin acknowledged the Russian jet was shot down by a Turkish F-16, after Russian officials had earlier said “firing from the ground” was responsible for downing the plane. But he said the fighter was over Syrian territory 1 kilometer away from the Turkish border when it was hit, and that it never threatened Turkey.

“This event goes beyond the framework of the regular fight against terrorism,” Putin said at a meeting with Jordan’s King Abdullah II in the southern Russian city of Sochi.

“Of course, our servicemen are waging a heroic fight against terror — not sparing themselves, sacrificing their own lives. But today’s loss is connected to a stab in the back by accomplices of the terrorists. There is no other way to characterize what happened today,” he said.

He added, “Today’s tragic event will have serious consequences for Russian-Turkish relations.”

Video from the area showed what appeared to be two pilots parachuting down from the sky, and a Syrian rebel group later released its own video of what it said was one of the pilots, who it said was dead.

Russia said only that its pilots ejected and their status was unknown.

NATO is to hold an emergency meeting Tuesday to discuss the incident.

“At the request of Turkey, the North Atlantic Council will hold an extraordinary meeting at 17.00 (Brussels time) (1600 GMT).  The aim of this extraordinary NAC meeting is for Turkey to inform Allies about the downing of a Russian airplane,” a NATO official said.

The Britain-based Syrian Observatory for Human Rights, which monitors violence in Syria, said the plane went down in the Turkmen Mountains in Latakia province. Pro-government forces have been fighting in that region and the Islamic State group is not known to be present there.

A U.S. defense official said Turkey informed the United States that its aircraft had shot down a Russian jet that violated its airspace. The official said U.S. forces were not involved.

This frame grab from video by Haberturk TV, shows smoke from a Russian warplane after crashing on a hill as seen from Hatay province, Turkey, Nov. 24, 2015.

Turkish officials have issued multiple warnings about aircraft violating its airspace during Syria’s four-and-a-half-year civil war. Its forces shot down a Syrian helicopter in 2013 and last month took down an unidentified drone that crossed into its territory.

Turkey has also complained about at least two instances of Russian jets flying in its airspace.

NATO protested those incursions, and in October noted what it called the “extreme danger of irresponsible behavior.”

After the earlier Russian incursions into Turkey, the United States deployed six F-15 jets from Britain to Turkey’s Incirlik Air Base to help the NATO ally secure its skies.

Russia began its military campaign in Syria in late September. In October, it reached an agreement with the United States, which is leading a coalition of countries bombing militants in Syria, to keep a safe distance and communicate in order to prevent mid-air disasters.