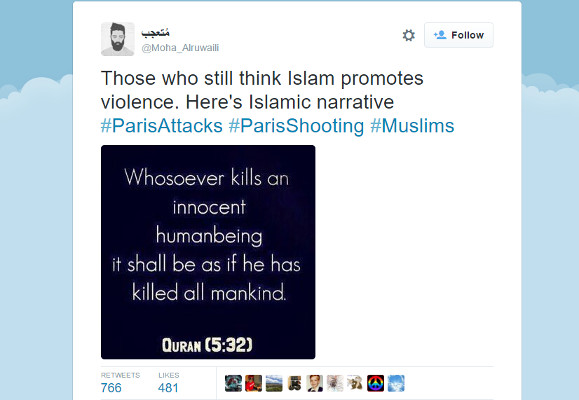 Muslims around the world have come out to show solidarity with the French and condemn a wave of coordinated terrorist attacks in Paris Friday night, which left 128 dead and scores others injured.

French President Francois Hollande on Saturday blamed the Islamic State group for the attacks in Paris that left at least 128 dead, calling them an “act of war”.

Before that, the identity of the attackers remained unconfirmed; however, a witness quoted by BFM television said he heard rounds of automatic rifle fire and someone shouting “Allahu Akbar!” at The Bataclan.

Following the attacks, speculation was rife about the identity and faith of the attacks, and the blame shifted to Muslims in a sequence that is all too familiar, with some even blaming refugees.

However, Muslims across the globe have come out to denounce the unprecedented attacks.

“We denounce this hateful incident,” Ahmed al-Tayyeb told a conference in comments broadcast by Egyptian state television. “The time has come for the world to unite to confront this monster.”

In an official statement, Prime Minister Nawaz sharif said: “Pakistan stands firmly behind the people and Government of France in this hour and extends its support to bring the perpetrators to justice,” he said in a statement, according to Radio Pakistan.

“In the name of the Iranian people, who have themselves been victims of terrorism, I strongly condemn these crimes against humanity and offer my condolences to the grieving French people and government,” he wrote.

Qatar’s foreign minister Khaled al-Attiyah denounced the “heinous attacks,” adding, “these acts, which target stability and security in France are against all human and moral values.”

Kuwait’s ruler, Sheikh Sabah Al-Ahmed Al-Sabah, in a message to Hollande, condemned “these criminal acts of terrorism which run counter to all teachings of holy faith and humanitarian values.” The country supports all measures France might take to protect its security, he said.

Many took to twitter to express their support for the French and denounce terrorism.