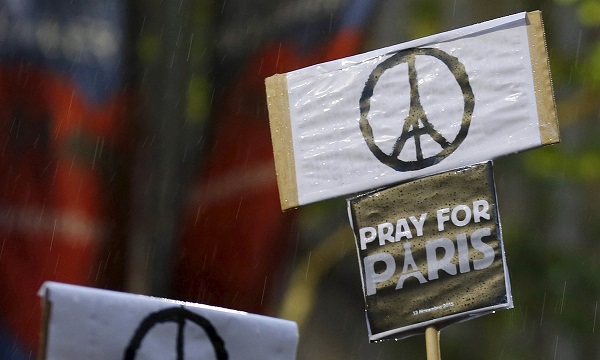 IN JANUARY 2015, after 16 people died in a series of incidents in Paris—including an attack on Charlie Hebdo, a satirical newspaper—Europe erupted in spontaneous demonstrations. People marched in protest against an assault on a fundamental principle of European civilisation: freedom of expression. Millions turned out for rallies across the continent, toting signs bearing the message “Je suis Charlie” in identification with those killed at the paper, which often caricatured the Prophet Muhammad. Many cautioned against letting the attacks turn public sentiment against Muslims in general, whether immigrant or native-born. In Germany the reaction of Horst Seehofer, the chairman of the CSU (the Bavarian sister party of Germany’s governing Christian Democrats), was typical. Denying any links between terrorism and immigration policies, he called on Germany’s anti-Islam Pegida movement to cancel a planned demonstration, and said he was pleased that all German parties had “refrained from deriving political capital from the attack.”

After Friday night’s attacks in Paris, however, for which Islamic State (IS) has claimed responsibility, Mr Seehofer took a rather different line. The jihadists’ attacks illustrated the need for “stronger control of Europe’s external borders, but also of national borders,” he said; it was a matter of “restoring law and order in Europe.” Bavaria’s finance minister, Markus Söder, also of the CSU, agreed: “Paris changes everything” he declared, adding that the attacks meant the end of “the time of uncontrolled immigration”. Within hours of the attacks, CSU leaders were exploiting them as part of their effort to undercut Chancellor Angela Merkel and force her to slow the influx of migrants from the Middle East.

The contrast was telling. In the aftermath of Friday’s attacks, which killed at least 129 people in locations around Paris, European leaders again issued statements of sympathy and outrage, while their citizens turned out en masse with flowers and candles to show solidarity. But where the “Je suis Charlie” demonstrators resisted linking terrorism to immigration or Islam, the mood this time has been more ambivalent. By targeting a well-known press outlet and a Jewish supermarket, the Charlie Hebdo killers allowed Europeans to frame their outrage around positive ideals: freedom of speech and of religion. But the latest attacks seemed to hit public spaces at random—a Cambodian restaurant, a football stadium, a concert hall. And some Europeans inevitably began linking the violence to the issue which has dominated their politics for the past six months: the wave of refugees streaming into their continent from the Middle East.

The most explicit linkage came in Poland, where the right-wing Law and Justice (PiS) party won a landslide election victory in October, aided in part by fear of migrants. In a hasty op-ed on Saturday morning, the incoming PiS minister for European affairs, Konrad Szymanski, wrote that after the Paris attacks he saw “no political possibility” of implementing the European Union’s new scheme to redistribute asylum applicants among member states. “Poland must retain full control over its borders, asylum and immigration policy,” Mr Szymanski wrote.

Germany, which expects to take in more than 1m asylum applicants this year, has fought hard for the redistribution policy, which the European Commission approved in September over the bitter objections of several member states. A Polish refusal to implement it would trigger a huge argument. (A German state assembly member from Saxony, Gerd Lippold, tweeted angrily that if everyone in Europe thought the way Mr Szymanski did, “walls will soon be going up between Germany and Poland against auto thieves”.) Beata Szydlo, Poland’s incoming prime minister, refused to support Mr Szymanski’s line, and Mr Szymanski then backed off, saying Poland could accept the deal if it were accompanied by “security guarantees”.

But similar arguments were voiced in other central and eastern European countries, many of which voted against the migrant-redistribution deal. In the Czech Republic, Andrej Babis, the flamboyant finance minister and media billionaire who is the country’s most popular politician, said he thought it would be necessary to close the external borders of Europe’s Schengen zone. The president, Milos Zeman, who has expressed concerns that Syrian migrants in the Czech Republic might stone unfaithful women to enforce Sharia law, said the attacks were part of a war for “the future of European civilisation”. The fact that one of the Paris attackers was carrying a Syrian passport was seized upon by those opposed to accepting asylum seekers. Slovakia’s prime minister, Robert Fico, noted triumphantly that he had warned other European leaders of “enormous security risks linked to migration. Hopefully, some people will open their eyes now.”

In other countries, expressions of genuine sympathy were quickly linked to various political or diplomatic agendas. In Moscow, where citizens have ample experience of Islamist terror, the French embassy was flooded with gifts and flowers. But Vladimir Putin, the president, made sure that his condolence message to the French president, François Hollande, also made the case for ending Russia’s international isolation: “Fighting this evil requires the real unity of the forces of the whole international community.” In Turkey (pictured), thousands of sympathisers marched to demonstrate solidarity between Paris and two other cities that have recently been hit by IS terror attacks: Ankara and Beirut. Meanwhile the president, Tayyip Recep Erdogan, insinuated that it was time to abandon the notion of “my terrorist is good, yours is bad”—clearly referring to the Kurdish militias that Turkey is battling (the Kurdistan Workers’ Party, or PKK), which are regarded as allies by the West in the fight against IS.

Western Europe’s right-wing populists also seized upon the Paris attacks as evidence for their own agendas, just as they did with the attacks against Charlie Hebdo. Geert Wilders, the Dutch anti-immigrant firebrand whose party is currently leading in the polls, called on the Netherlands’ prime minister to seal the country’s borders. “He who sows the Koran reaps the jihad,” tweeted the predictably obnoxious Filip de Winter of Vlaams Belang, the Flemish far-right party. But such provocations failed to make much impact. Belgium was preoccupied by the news that three people said to be associated with the Paris attacks had been arrested outside Brussels. Its interior minister, Jean Jambon, vowed a “root and branch” cleanup of the neighbourhood of Molenbeek, where the suspects lived. It was the same neighbourhood where suspects associated with theCharlie Hebdo attacks had been tracked down and shot by police in January.

Even so, in some of the places where the attacks might have been expected to inflame the migrant debate, they have not—or, at least, have not done so yet. Just as the attacks were beginning on Friday, Sweden and Denmark were embroiled in a chaotic tit-for-tat squabble over controlling migration inflows. Sweden, which takes in more refugees than any other country in Europe on a per capita basis, announced on Thursday that it was introducing border controls, threatening to trap many asylum seekers who had been heading there in Denmark. The Danes, who have long had some of the toughest immigration policies in Europe, responded the next day with 44 measures to dissuade migrants from coming, mainly by cutting benefits.

But neither the Danish People’s Party, the main Danish anti-immigrant group, nor their Swedish equivalents, the Sweden Democrats, have used the Paris attacks as a propaganda tool. The mood in both countries has been one of respect and non-partisan sympathy, just as it was after the Charlie Hebdo attacks. Of course, anti-immigrant parties may simply be holding their fire, confident that images of Islamist terror will heighten resistance to immigration without the need for them to say anything.

It is heartening that Saturday’s popular demonstrations of solidarity with France, and European leaders’ messages of support, were full of calls, even if vague ones, not to allow terrorists to divide Europe’s citizens against each other. Yet with border controls going up in one European country after another, it will be hard to maintain that they have not.