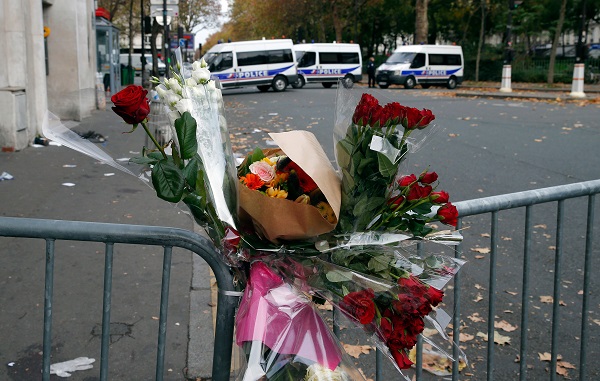 As a Muslim, I wish to denounce any and all acts of genocidal, homicidal, and suicidal violence, anywhere in the world; and in particular, I wish to denounce the criminal gangs gathered under the flag of “Islamic State” or any other similar group terrorising innocent people from India, Afghanistan and Pakistan to Iraq and Syria, from North Africa to Turkey, and from the Arab and Muslim world to Europe and the US.

I wish to ask, can a Muslim today say that she or he is a Muslim, and then say what I just said? Am I – and millions of other Muslims like me – allowed to express our sympathies, solidarities, and sorrows on this horrific occasion, and do so from the innermost depth of our humanities as Muslims?

Of course, the attack on the French is an attack on humanity, but is an attack on a Lebanese, an Afghan, a Yazidi, a Kurd, and Iraqi, a Somali, or a Palestinian any less an attack “on all of humanity and the universal values that we share”? What is it exactly that a North American and a French share that the rest of humanity are denied sharing?

In his speech, UK Prime Minister David Cameron, speaking as a European, was emphatic about “our way of life”, and then addressing the French he added, “Your values are our values, your pain is our pain, your fight is our fight, and together, we will defeat these terrorists.”

What exactly are these French and British values? Can-may, a Muslim share them too – while a Muslim? Or must she or he first denounce being a Muslim and become French or British before sharing those values?

These are loaded terms, civilisational terms, and culturally coded registers. Both Obama and Cameron opt to choose terms that decidedly and deliberately turn me and millions of Muslims like me to their civilisational other.

Today, Muslims have replaced those Jews and become the civilisational other of Europe, and these heads of states, Obama and Cameron, on this particularly traumatic moment in Paris, perpetuate that demonisation by casting Muslims as Muslims outside the purview of humanity.

They make it impossible for me to remain the Muslim that I am and join them and millions of other people in the US and the UK and the EU in sympathy and solidarity with the suffering of the French.

As a Muslim I defy their provincialism, and I declare my sympathy and solidarity with the French; and I do so, decidedly, pointedly, defiantly, as a Muslim.

When Arabs or Muslims die in the hands of the selfsame criminal Islamic State of Iraq and the Levant (ISIL) gangs in Afghanistan, Iraq, Syria, or Lebanon, they are reduced to their lowest common denominator and presumed sectarian denominations, overcoming and camouflaging our humanity. But when French or British or US citizens are murdered, they are raised to their highest common abstractions and become the universal icons of humanity at large.

Why? Are we Muslims not human? Does the murder of one of us not constitute harm to the entire body of humanity?

Some 400 years ago, in his Merchant of Venice, William Shakespeare turned the internally demonised other of the European Christianity – the European Jew – into a figure of defiance against systematic stigmatisation and allowed his Shylock character to cry out loud:

Today, Muslims have replaced those Jews and become the civilisational other of Europe, and these heads of states – Obama and Cameron – on this particularly traumatic moment in Paris, perpetuate that demonisation by casting Muslims as Muslims outside the purview of humanity.

By doing so, they are making it impossible for Muslims to remain Muslims and join in the universal march of humanity against the barbarity of ISIL or any other murderous act of homicide. Why? I refuse to allow them or anyone else to alienate me from who I am.

I am a man. I am a Muslim. I am a human being – and, precisely, as all of those and remaining true to who I am, I wish to join the march of humanity on every corner of this fragile earth against barbarism.

Please, President Obama and Prime Minster Cameron, stand aside and make room for me. I wish to join the rest of humanity and denounce this barbaric act. Would you mind?

Hamid Dabashi is the Hagop Kevorkian Professor of Iranian Studies and Comparative Literature at Columbia University.