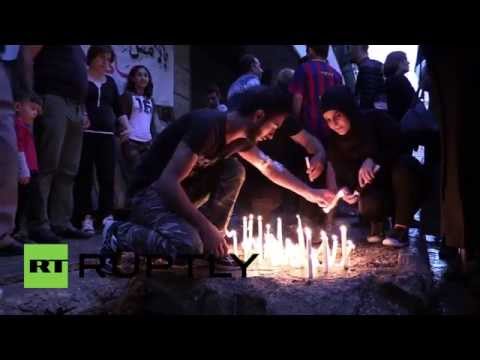 Shattered glass, remnants of clothes and blocks of rubble shrouded the pavement in the Bourj el-Barajneh area of Ain el-Sikeh after two deadly suicide explosions, claimed by the Islamic State of Iraq and the Levant (ISIL) group, rocked Beirut’s southern suburbs, killing 43 people and wounding more than 200 others.

Residents worked quickly to clear up the remnants on Friday morning, erecting flags for the Lebanese Shia party, Hezbollah – a deliberate signal that support for the group remained strong.

“[The terrorists] are not going to make us weak,” one resident and shop owner told reporters at the scene. “Every time they hit us, especially in Dahiyeh [Beirut’s southern suburbs], we become stronger.”

“They can take away our homes and our livelihoods, but they’ll never take away our support for the resistance,” another said defiantly.

The deadly attacks, which took place in the heavily populated commercial and residential district at rush hour on Thursday, were the first of their kind in the area in over a year. The blasts brought back fears that the country may be facing a new cycle of suicide attacks, casting a shadow over the recent progress on Lebanon’s political front.

Without a president for more than a year and a half, Lebanon has been in a state of political deadlock, with state institutions and public services grinding to a near-standstill. Parliament has extended its own mandate twice, with the cabinet unable to agree even on which agenda items to discuss.

The country’s infrastructure, meanwhile, has strained under the weight of more than 1.5 million refugees from neighbouring Syria, and protests have rocked the country amid Lebanon’s still-unresolved rubbish crisis.

The bombings this week brought Lebanese political factions together in condemnation, presenting an unprecedented show of unity in response to the tragedy.

“Obviously, there is a rein-in from playing the blame game, as had previously been done by the political factions in the country,” Maha Yahya, a senior associate at the Carnegie Middle East Center, said. “This time, no one has come out and blamed Hezbollah’s participation in Syria. It definitely shows there is more resolve to work together and present one front.”

In addition, in recent days, there have been a series of small but encouraging political breakthroughs. Before the bombings on Thursday, Lebanon’s parliament met for the first time since May 2014 to address more than 40 draft laws that had been awaiting approval – some for more than a year.

Following a number of closed-door meetings between political allies and foes, officials returned to the table, seemingly determined to address the ongoing paralysis. A speech earlier this week by Hezbollah secretary-general Hassan Nasrallah indicated his party and its allies were keen on coming to an agreement. Nasrallah called for a comprehensive political deal between the opposing March 14 and March 8 political camps, and stressed the need for a domestic solution, noting no external power could fix this.

“Nasrallah’s words were well received by the March 14 movement, with the interior minister saying his initiative was positive and should be addressed,” Khaldoun Sharif, a political analyst and adviser to former Prime Minister Najib Mikati, said. “By presenting this comprehensive basket, including the electoral law, the presidency and other matters, Nasrallah is trying to create a new Lebanese momentum.”

But it remains too early to tell if this is the start of a new political chapter for the country, Sharif said.

“What happened in parliament, in my opinion, was just an opportunity to buy some time,” he said. “They didn’t discuss the electoral law, and this is the most significant issue. The electoral law is key for any steps towards presidential elections.”

Still, these steps towards a political resolution will have little impact on the security situation in Lebanon, analysts say.

“The breakthrough in parliament and the bombing are not linked in any way … What is of concern now is whether we will be witnessing a return of the bombings with a vengeance,” Yahya said.

“What happened in Bourj el-Barajneh is bigger than just Lebanon,” Sharif added. “This is linked to Russia, to Egypt, to Syria – to the whole region.”

“We definitely have seen a political breakthrough,” Yahya said. “In the long term, it is hard to tell what this means, but the politicians have finally come to their senses and realised the political paralysis was taking Lebanon on a rapid descent into a quagmire that would have been very difficult to get out of.”

The developments follow threats by predominantly Christian parties to take to the streets and boycott future parliamentary sessions unless the issue of electoral reform is addressed. Lebanon has not had national elections since 2009, as political factions have been unable to agree on a new electoral law.