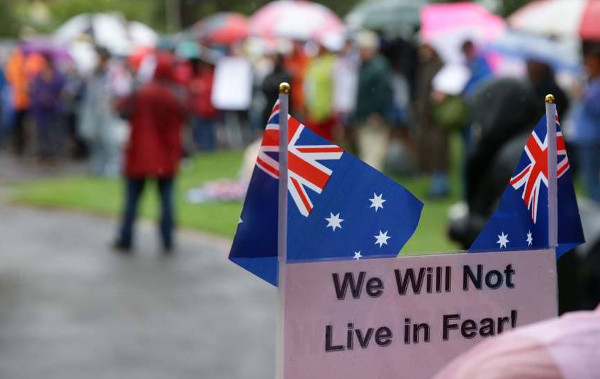 The average Australian does not know much about the Islamic faith and the Muslim community, yet, some believe they have a right to act upon and create biased groups and fronts going against the religion and community. Where do they get all this information from?

Recent media representation of Muslims has not been particularly balanced. The ongoing post 9-11 waves of political drama, the recent shootings in Sydney and Melbourne debates have ushered in the narrative of Muslims as the dangerous or deviant “other” into the public imagination.

These debates and anger have mainly come after the Lindt Café shooting in Sydney, carried out by a previously convicted, mentally unstable man, Haroon Monis, and the more recent shootings in Paramatta, Sydney, where the acts of a young boy, who used Islam as a front were put up as the face of every Muslim in Australia and throughout the world.

At exactly the same time, some centre-left media outlets also tend to portray Muslims as passive, voiceless, faceless victims of racism and islamophobia. Muslims experience higher than average levels of discrimination and racism in Australia. Violent extremism exists to a minimal extent at the very fringes of the Muslim Community. In a globalised world governed by the power of the image, the question is no longer what has sparked this event or that incident and how it has unfolded on the ground, but how it gets captured by the camera and reported to viewers, listeners, and readers at home.

The United Patriots Front and Reclaim Australia believe that Islam in general is the most dangerous problem Australia has and will ever face. Both these campaigns strive to rid and eradicate Muslims from Australia, claiming to only want back the same land and culture they grew up in.

Reclaim Australia claim that they are “not a racist rally” and only want the government to “start protecting Australia against extremists and extremist groups with the political ideology that comes hand in hand with Islam”. They also are NOT against Muslims but “totally do not want Sharia Law”. Canberra Times-April 5th 2015.

All of these acclaimed statements by Reclaim Australia prove how little they know and understand about Islam and Islam in Australia. There is no sharia law in Australia. Processed foods and meat that attain a “Halal certification” are approved by the government and certain associations and are also mainly for the export markets where Australia gains billions of dollars.

Yet, a certain ignorant corner of Australians chooses to put aside real facts and truths regarding the religion of Islam. Politics and radicalisation start making an appearance in their so called protests and reasons to exterminate Australia of Islam.

Generalised hostility against Islam is part of a continuum tracing back to 9/11. In Australia it is also sourced from a deep seam of xenophobia and racism. Recent atrocities in the Middle East, the Lindt café hostage crisis last year, police raids and arrests of suspected terrorists all contribute to a narrative of being under siege.

The counterpoints should be easy to make. First, Islam is not a monolith and it does not represent a certain culture, tribe or country, but rather, Islam is a global religion, for every race, culture and country; it operates within different geopolitical and cultural milieus, like all religions. Second, based on statistics alone, the smart assumption is that Muslim Australians are rather ordinary and need not explain themselves. Third, the social upheaval that they are accused of causing is actually being enacted by those minorities who hate them. Fourth, our democratic systems and institutions are not so brittle that they must be defended against ‘creeping sharia’. The irony here is that those who extol the virtues of Australian culture understand nothing of its fortitude.

There has been no such pushback against anti-Islam narratives, under the current liberal party government, at least until Malcolm Turnbull became prime minister. Under Tony Abbott, the conflation of Islam and extremism became mainstream. In a six-flag national security speech in February, he remarked, ‘I’ve often heard Western leaders describe Islam as a religion of peace. I wish more Muslim leaders would say that more often, and mean it.’

Abbott found every opportunity to drop the phrase ‘death cult’. It is a phrase echoed in submissions to a senate committee inquiry into ‘third party certification’, which was set up under a moral panic over halal labels on Vegemite and other food products. (SMH-Federal Politics, 12th May 2015). The media, being the manipulative and fear-striking industry it is, will continue to repeat and recycle old news, to instil even more non-existent fear into viewers and readers to sell their content.

Senators Cory Bernardi and Jacquie Lambie continue to insist that halal certification funds terrorism, despite evidence from the Australian Crime Commission and Australian Transaction Reports and analysis Centre (AUSTRAC) that the link does not exist.

With their unproven anxieties, it is no wonder that anti-Islam groups are energised — to the extent of launching a new political party with an anti-Islam theme. The Australian Liberty Alliance (ALA) seeks to emulate Dutch politician Geert Wilders’ Party for Freedom, with policies like banning full face coverings in public and removing Australia from the UN charter of refugees (The Guardian, 21st October 2015).

However, there are a majority of Australians, or true Aussies that feel the need to point out that radicalisation and terrorism are not confined to Islam and Muslims. After the Sydney siege, there were several Australian Muslim women who were terrified of travelling on public transport alone. According to ABC News (16th December 2014), the very helpful and significant hashtag of #I’llridewithyou started to ease tensions these women had. The trend went viral on Twitter, gaining 120,000 tweets within one hour. The hashtag started out with Rachel Jacobs, who tweeted out the following; “1/2 #illridewithyou overwhelmed. Mine was a small gesture because of sadness that someone would ever feel unwelcome because of beliefs”. Her selfless act inspired many more ‘Anglo’ Australians to assist and defect any negative statements and comments directed towards the Muslims whenever they were using public transport.

An anti-Islam rally in Hobart was met with startling reaction. The protestors were out-numbered 1 to 5 against the anti-racism protestors, who marched proudly through the streets of Hobart.  Rival protests were organised by anti-Islamic group United Patriots Front and a pro-diversity group at Hobart’s Franklin Square. About nine people turned out for the United Patriots, compared to about 50 for the anti-racism group. This rally ended much more peacefully than those in Bendigo, Victoria, as stated in ABC News (10th of October 2015).

The hundreds of thousands of Australians who actually do believe in equal rights and religion and race equality are mostly over-looked by the media. Muslims in today’s society tend to ignore the surrounding mess the mainstream media creates and portray themselves as a community who doesn’t care. When in reality, the constant hate and threats do hurt. They provoke Muslims, especially the youth, to retaliate. We need to remember that there is a separation between religion and radicals. Just because someone is Christian, doesn’t mean that they share the same views as the Westboro Baptist Church and just because someone is Muslim, doesn’t link them to every radical Muslim attack.