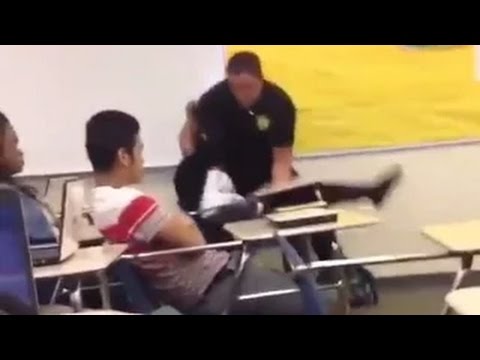 The assault of a black teenage girl last month by a police officer while she sat quietly in her class stirred a variety of emotions in people across the country. Many were outraged at the impunity with which an adult trained to kill can abuse a child and called for the officer’s firing and arrest. Others quickly rallied to blame the victim and attested that the officer might have gone over the top, but he was doing his job because the teen was not “following the rules“. As if somehow, a teenager sitting in a seat is an immediate threat to the health and welfare of society and warrants police aggression. What is perhaps most astounding is the reaction of some American Muslims to the brutality laid out before them.

Muslims generally understand their inherent duty to resist oppression when they encounter it. Oppression is particularly heinous, as Allah says in the Quran, “…oppression is worse than slaughter…” (al-Qu’ran 2:191), so there is heightened expectation that Muslims will resist repression in all of its forms. Unfortunately, it appears that for some Muslims, Islam’s call to fight oppression does not extend to blacks in the United States. Black Muslims consistently encounter reactions to the subjugation of their people among their coreligionists similar to the ones they find among other non-blacks. The resulting dynamic assuages police brutality and implicates the victims, who somehow “had it coming”. Ultimately, many non-black/non-African-American Muslims conveniently blind themselves to the cruelty in front of them and share in the white Supremacist mindset that blue trumps black.

Some Muslims’ reactions to the assault of a black teenager on social media serve as examples of how many non-black Muslims accept the paradigm that a black body deserves subjugation because it is a black body. A particularly disturbing post written by a leader of a prominent Muslim non-profit organization states, “she didn’t respect her teachers or her principle and they called the cops on her for disturbing the class” and “Being an a**hole gets you treated like one.” I do not want to name the leader because the organization does great work. However, the leader’s post clearly establishes an opinion wherein the young girl is somehow culpable for the abuse to which she was subject. Because of their indoctrination into the country’s systemic race structure that devalues blackness, a number of non-black Muslims commonly hold a double standard that humanizes the subjugation of non-blacks while  incriminating blacks for the systemic racism that demeans and dehumanizes them.

Responses of non-black/non-African-American Muslims to depictions of resistance and brutality demonstrates a double standard that exist in many American Muslim communities, wherein the non-black oppressed garner immediate sympathy while blacks must qualify their debasement. In 2012, pictures of  Ahed Tamimi, a Palestinian girl, held by an Israeli soldier circulated the internet. The picture became very popular, and many hailed the young girl as a hero for defying her oppressors. Although subsequent pictures showed her with her fist raised and in the face of soldiers, the common sentiment among many American Muslims determined her a sympathetic figure of her people’s oppression. No one outside those wanting to ignore or qualify the repressive conditions under which she lived called her an a**hole, nor were there assertions that she got what she deserved because she was “disruptive” or “breaking the rules”. So the lack of sympathy and speed at which some non-black Muslims in America condemn a black girl for her abuse boggles the mind and is a sad commentary on the state of race relations in American Muslim communities.

Fortunately, there were non-black Muslims who saw the situation for what it was, the dehumanization of a minor and another example of the consistent use of brute police force to maintain dominance over black bodies. Arab-American law professor Khaled Beydoun asserted on his Facebook, “Justifications of the police officer’s brutal attack on the Black schoolgirl in South Carolina are just as alarming as the attack itself.” On Twitter, Palestinian-American activist Linda Sarsour said, “Anyone justifying the brutalization of the Black female student in S. Carolina by a school officer will be blocked. No discussion needed,” because she found such attempts unacceptable. Thus, the sentiment that this student somehow got what she deserved is not uniform among American Muslims; however, further education about the nefarious role of racism in the United States and its damaging effects is needed.

An unfortunate circumstance of the NbA African-American Muslim experience is that the fellow Muslims they pray and fast with often ignore, perpetuate, or disregard the system that subjugates them and their people while demanding participation of black Muslim bodies in the struggle against non-black oppression. This double standard not only jeopardizes American Muslim solidarity, it presents a duality that makes skin color a qualifier for justice, which is not conducive to the faith.