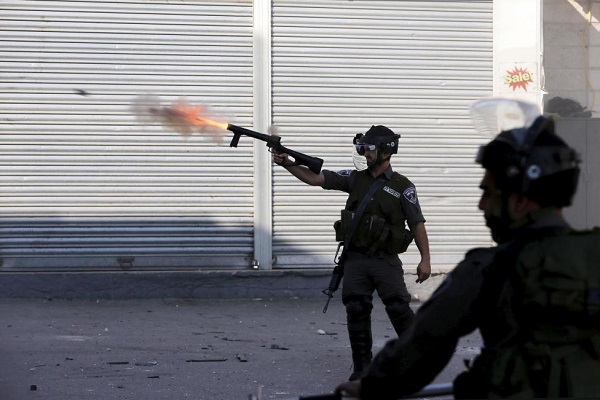 JERUSALEM (Reuters) – Israeli security forces shot dead two Palestinians in East Jerusalem on Saturday, one of whom had stabbed two Israelis, police said, in a further wave of violence that has raised concerns about a new Palestinian uprising.

Police said two ultra-Orthodox Jewish men were wounded in the knife attack by a 16-year-old Palestinian near Jerusalem’s walled Old City. Earlier, paramilitary police shot dead a militant who had opened fire at them during late-night clashes at the Palestinian Shuafat refugee camp, police said.

Hamas, the Islamist Palestinian militant group which controls the Gaza Strip, said in a statement that the Shuafat shooter was one of its members. “The hero martyr fought the Israeli occupation with language they understand,” Hamas said.

Tensions have surged in 11 days of violence in which four Israelis and 17 Palestinians – including several Palestinians shot by police, have been killed in Jerusalem, the Israeli-occupied West Bank, Gaza and in Israeli cities.

Scores of Palestinians have been injured in clashes with Israeli troops and at least 12 Israelis have been wounded in almost daily Palestinian stabbing attacks.

The violence has been fueled by Palestinian fears that visits by Jewish groups, including lawmakers, to the Jerusalem Old City plaza revered in Judaism as the site of two destroyed biblical temples are eroding Muslim religious control of the al-Aqsa mosque compound, Islam’s third holiest shrine.

Israeli Prime Minister Benjamin Netanyahu has said repeatedly he will not allow any change to the arrangements under which Jews are allowed to visit the site but non-Muslim prayer is banned.

His assurances over conditions at the site, known as Temple Mount to Jews and Noble Sanctuary to Muslims, have done little to quell alarm among Muslims across the region.

The violence is not of the intensity of two Palestinian uprisings in the late 1980s and early 2000s but it has prompted talk of a third “intifada”.

On Friday Israeli soldiers shot dead seven Palestinians in protests near the Gaza border and a knife-wielding Israeli wounded four Arabs in the southern Israeli town of Dimona.

In the northern town of Afula, an Israeli-Arab woman was shot several times and wounded by police who closed in on her as she held up a knife, a video clip circulated on social media showed. Police said she had tried to stab a bus station guard.

There was also violence in the West Bank city of Ramallah, with video footage showing anIsraeli army jeep running over a stone-throwing Palestinian, who was injured.

Also on Friday, the Israeli military said Gaza militants fired a rocket into southern Israel. No group claimed responsibility. The attack caused no casualties or damage.

Both Netanyahu and Palestinian President Mahmoud Abbas have called for calm and Palestinian police continue to coordinate with Israeli security forces to try to restore order, but there are few signs of the violence dying down.

(Additional reporting by Ali Sawafta in Ramallah and Nidal al-Mughrabi in Gaza; Writing by Maayan Lubell; Editing by Mark Heinrich)