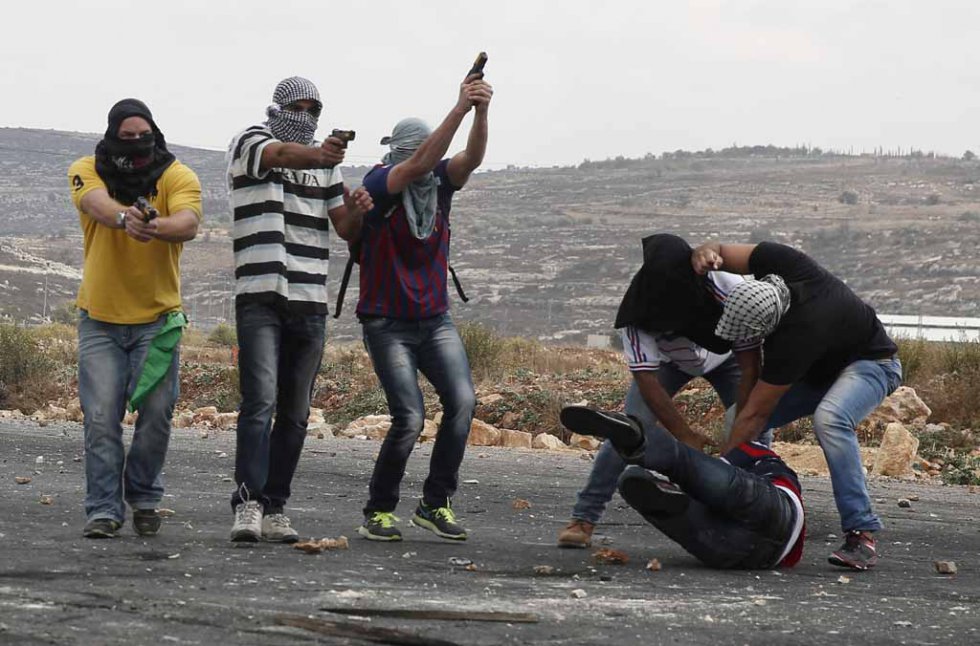 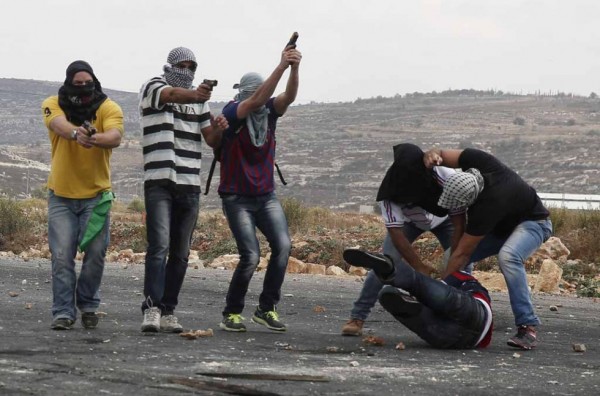 It’s fairly common to see Israeli agents infiltrate the crowds of Palestinian stone throwers during demonstrations. I’ve witnessed this plenty of times in Jerusalem. The goal of these “mustarabiin” — literally “those who disguise themselves as Arabs” — is to stop the protesters. They usually take out their weapons without using them, or, more often, point them into the sky, as if they were about to shoot into the air.

But this week, I filmed these undercover agents for the first time firing live bullets into a crowd of protesters.

I showed up to cover a “Day of Rage” that Palestinian students staged at the Bir Zeit University in Ramallah, in the occupied West Bank. At the end of the demonstration, the protesters headed toward the DCO checkpoint near the Bet-El settlement, which has often been the scene of clashes between the two sides.

The clash began to get very violent and, not wanting to risk getting hit by a projectile from either side, I walked over to the side of the road, next to AFP photographer Abbas Momani about 10 meters away.

I put my camera on a tripod and continued to film the scene.

Suddenly we saw four masked men who had been throwing stones with the others take out guns from their waistsbands and three others who rushed toward a demonstrator.

There were screams, most of the Palestinians ran away as fast as they could and the Israeli agents opened fire as stones flew toward them.

Some fired in the air, but others clearly targetted the Palestinian demonstrators. One of the youths was hit in the back of the head.

As you can see in the video, the Israeli agents punched and kicked the protester they caught. Then the Israeli soldiers who had been several dozen metres away arrived as backup.

Three young Palestinians who were captured after being wounded were dragged away and treated by military doctors near the army vehicles, where my colleague Abbas Momani could photograph them from up close.

I stayed a bit further away, as I was afraid of getting my camera confiscated by the soldiers – recently our team was assaulted by Israeli soldiers as we covered clashes in the West Bank and my equipment had been destroyed.

The video is composed of two parts. The first lasts about 10 seconds and shows one of the undercover agents, the one with the yellow shirt, circulate in the middle of the group of Palestinians, and another throw stones toward the soldiers. The second part starts at the moment when the Israeli agents take out their weapons. Some 30 seconds passed in between the two parts. But since nothing much happened during this time, I wasn’t filming.

The agents had arrived after the clashes had started and had been among the protesters for a while before making themselves known. It was impossible for the protesters to recognise the enemy was among them — during West Bank clashes everyone wears masks, be it an old T-shirt or the Palestinian keffiyeh. The agents — be they Jews, Druze, Israeli Arabs or Bedouins — all speak Arabic and physically look like the demonstrators.

Having arrived with their backpacks, their sneakers and bright coloured T-shirts, in Barcelona or France football jerseys, the agents blended perfectly among the student protesters. After the clash, they all walked toward the army vehicles, a green Hamas scarf still hanging from his backpocket.