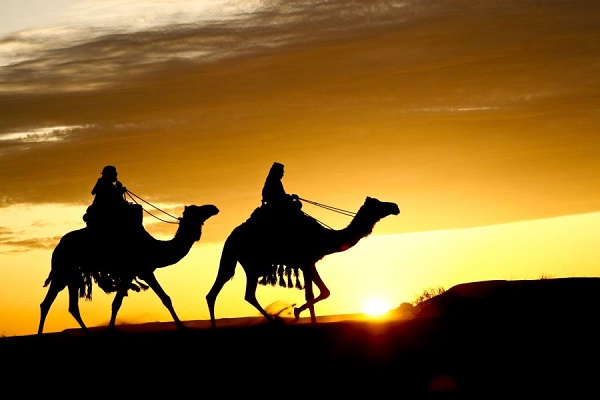 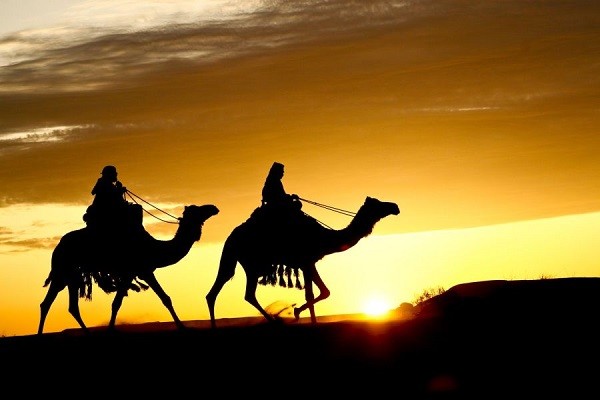 KHABBAB RA AND HIS SUFFERING FOR THE DEEN OF ALLAH

WE CANT EVEN LEAVE HARAAM THINGS FOR THE PLEASURE OF ALLAH, YET LOOK WHAT SAHABAH RA WENT THROUGH FOR THIS DEEN

May Allah give us the Taufeeq.

A woman named Umm Anmaar who belonged to the Khuza-a tribe in Makkah went to the slave market in the city. She wanted to buy herself a youth for her domestic chores and to exploit his labor for economic gains. As she scrutinized the faces of those who were displayed for sale, her eyes fell ON a boy who was obviously not yet in his teens. She saw that he was strong and healthy and that there were clear signs of intelligence on his face. She needed no further incentive to purchase him. She paid and walked away with her new acquisition.

On the way home, Umm Anmaar turned to the boy and said:

“Where do you come from?”

“Yes, from the Banu Tamim.”

“How then did you come into the hands of the slave dealers in Makkah?”

“One of the Arab tribes raided our territory. They took our cattle and captured women and children. I was among the youths captured. I passed from one hand to another until I ended up in Makkah . . .”

Umm Anmaar placed the youth as an apprentice to one of the blacksmiths in Makkah to learn the art of making swords. The youth learn quickly and was soon an expert at the profession. When he was strong enough, Umm Anmaar set up a workshop for him with all the necessary tools and equipment from making swords. Before long he was quite famous in Makkah for his excellent craftsmanship. People also liked dealing with him because of his honesty and integrity. Umm Anmaar gained much profit through him and exploited his talents to the full.

In spite of his youthfulness, Khabbab displayed unique intelligence and wisdom. Often, when he had finished work and was left to himself, he would reflect deeply on the state of Arabian society which was so steeped in corruption. He was appalled at the aimless wandering, the ignorance and the tyranny which he saw. He was one of the victims of this tyranny and he would say to himself:

“After this night of darkness, there must be a dawn.” And he hoped that he would live long enough to see the darkness dissipate with the steady glow and brightness of new light.

Khabbab did not have to wait long. He was privileged to be in Makkah when the first rays of the light of Islam penetrated the city. It emanated from the lips of Muhammad ibn Abdullah -Rasulullah SAW as he announced that none deserves to be worshiped or adored except the Creator and Sustainer of the universe. He called for an end to injustice and oppression and sharply criticized the practices of the rich in accumulating wealth at the expense of the poor and the outcast. He denounced aristocratic privileges and attitudes and called for a new order based on respect for human dignity and compassion for the underprivileged including orphans, wayfarers and the needy.

To Khabbab, the teachings of Muhammad SAW were like a powerful light dispelling the darkness of ignorance. He went and listened to these teachings directly from him. Without any hesitation he stretched out his hand to the Prophet in allegiance and testified that “There is no god but Allah and Muhammad is His servant and His messenger.” He was among the first ten persons to accept Islam .

Khabbab RA did not hide his acceptance of Islam from anyone. When the news of his becoming a Muslim reached Umm Anmaar, she became incensed with anger. She went to her brother Sibaa ibn Abd al-Uzza who gathered a gang of youths from the Khuzaa tribe and together they made their way to Khabbab RA. They found him completely engrossed in his work. Sibaa went up to him and said:

“We have heard some news from you which we don’t believe.”

“What is it?” asked Khabbab RA.

“We have been told that you have given up your religion and that you now follow that man from the Banu Hashim .”

“I have not given up my religion” replied Khabbab RA calmly. “I only believe in One God Who has no partner. I reject your idols and I believe that Muhammad is the servant of God and His messenger.”

No sooner had Khabbab RA spoken these words than Sibaa and his gang set upon him. They beat him with their fists and with iron bars and they kicked him until he fell unconscious to the ground, with blood streaming from the wounds he received.The news of what happened between Khabbab RA and his slave mistress spread throughout Makkah like wild-fire. People were astonished at frankness of Khabbab’s . They had not yet heard of anyone who followed Muhammad SAW and who had the audacity to announce the fact with such frankness and deviant confidence.

The Khabbab RA affair shook the leaders of the Quraysh. They did not expect that a blacksmith, such as belonged to Umm Anmaar and who had no clan in Makkah to protect him and no asabiyyah to prevent him from injury, would be bold enough to go outside her authority, denounce her gods and reject the religion of her forefathers. They realized that this was only the beginning . . .

The Quraysh were not wrong in their expectations. Khabbab’s RA courage impressed many of his friends and encouraged them to announce their acceptance of Islam. One after another, they began to proclaim publicly the message of truth. In the precincts of the Haram, near the Kabah, the Quraysh leaders gathered to discuss the problem of Muhammad SAW. Among them were Abu Sufyan ibn Harb, al Walid ibn al-Mughira and Abu Jahl ibn Hisham. They noted that Muhammad was getting stronger and that his following was increasing day by day, indeed hour by hour. To them this was like a terrible disease and they made up their minds to stop it before it got out of control. They decided that each tribe should get hold of any follower of Rasulullah SAW among them and punish him until he either recants his faith or dies.

On Sibaa ibn Abd al-Uzza and his people fell the task of punishing Khabbab RA even further. Regularly they began taking him to all open area in the city when the sun was at its zenith and the ground was scorching hot. They would take off his clothes and dress him in iron armor and lay him on the ground. In the intense heat his skin would be seared and hit body would become inert. When it appeared that all strength had let him, they would come up and challenge him:

“What do you say about Muhammad’?”

“He is the servant of God and His messenger. He has come with the religion of guidance and truth, to lead us from darkness into light.”

They would become more furious and intensify their beating. They would ask about al-Laat and al-Uzza and he would reply firmly:

“Two idols, deaf and dumb, that cannot cause harm or bring any benefit…”

This enraged them even more and they would take a big hot stone and place it on his back. Khabbab’s RA pain and anguish would be excruciating but he did not recant. The inhumanity of Umm Anmaar towards Khabbab was not less than that of her brother. Once she saw the Prophet SAW speaking to Khabbab RA at his workshop and she flew into a blind rage. Every day after that, for several days, she went to Khabbab’s RA workshop and punished him by placing a red hot iron from the furnace on his head. The agony was unbearable and he often fainted.

Khabbab RA suffered long and his only recourse was to prayer. He prayed for the punishment of Umm Anmaar and her brother. His release from pain and suffering only came when the Prophet SAW, peace be upon him, gave permission to his companions to emigrate to Madinah. Umm Anmaar by then could not prevent him from going. She herself became afflicted with a terrible illness which no one had heard of before. She behaved as if she had suffered a rabid attack. The headaches she had were especially nerve-racking. Her children sought everywhere for medical help until finally they were told that the only cure was to cauterize her head. This was done. The treatment, with a ret hot iron, was more terrible than all the headaches she suffered.

At Madinah, among the generous and hospitable Ansar, Khabbab RA experienced a state of ease and restfulness which he had not known for a long time. He was delighted to be near the Prophet SAW with no one to disturb his happiness. He fought alongside the noble Prophet at the battle of Badr. He participated in the battle of Uhud where he had the satisfaction of seeing Sibaa ibn Abd al-Uzza meet his end at the hands of Hamza ibn Abd al-Muttalib RA, the uncle of the Prophet SAW.

“No one is more deserving than you to be in this assembly other than Bilal RA.” He asked Khabbab RA about the torture and the persecution he had received at the hands of the mushrikin. Khabbab RA described this in some detail since it was still very vivid in his mind. He then exposed his back and even Umar was aghast at what he saw.

In the last phase of his life, Khabbab RA was blessed with wealth such as he had never before dreamed of. He was, however, well-known for his generosity. It is even said that he placed his dirhams and his diners in a part of his house that was known to the poor and the needy. He did not secure this money in any way and those in need would come and take what they needed without seeking any permission or asking any questions.

In spite of this, he was always afraid of his accountability to Allah SWT for the way he disposed of this wealth. A group of companions related that they visited Khabbab RA when he was sick and he said:

“In this place there are eighty thousand dirhams. By Allah, I have never secured it any way and I have not barred anyone in need from it.”

He wept and they asked why he was weeping.

“I weep,” he said, “because my companions have passed away and they did not obtain any such reward in this world. I have lived on and have acquired this wealth and I fear that this will be the only reward for my deeds.”

Soon after he passed away. The Khalifah Ali ibn Abu Talib RA, may Allah SWT be pleased with him, stood at his grave and said:

“May God have mercy on Khabbab RA. He accepted Islam wholeheartedly. He performed hijrah willingly. He lived as a mujahid and Allah SWT shall not withhold the reward of one who has done good.”