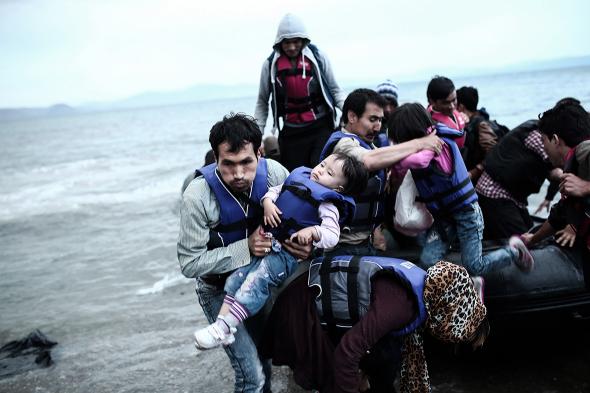 Almost everyone agrees that the tens of thousands of people fleeing into Europe from Syria, Afghanistan, and other locations constitutes a crisis. But there’s no agreement about the solution — whether they should be welcomed or prevented from entering.

That split goes so deep that the two sides can’t even agree on what the people entering Europe should be called. To those who view them sympathetically, they’re refugees; to those who want them kept out, they’re migrants.

So which side is right? The answer’s complicated. For people in developed countries, there’s a big difference between someone who chooses to leave one country for another and someone who’s forced to flee. But from the perspective of the people doing the leaving, that division isn’t nearly as clear.

“Migrant”: a general term that’s become associated with people who move for work

When people leave one country for another, that’s called “migration” — regardless of the reason. But confusingly, according to the United Nations and to most migration experts, not everyone who engages in migration is a migrant.

Instead, the term “migrant” is used to refer to someone who chooses to leave his or her home country — not someone who’s forced to do it. Here’s what the UN Convention on the Rights of Migrants says (emphasis added):

The term ‘migrant’…[covers] all cases where the decision to migrate is taken freely by the individual concerned, for reasons of ‘personal convenience’ and without intervention of an external compelling factor.

But the connotation of “migrant” — especially when it’s used in political debates — is even narrower than that. Someone might choose to leave his or her home country for plenty of reasons — to earn more money, to be with family members who’ve also migrated, to settle down with a spouse who lives in another country — and by the UN’s definition, all of these people are migrants. But when politicians talk about migrants, they’re almost always talking about economic migrants: people who come to work.

Here’s why this matters. Almost everyone (except for supporters of open borders) believes that countries have the right to decide who gets to enter their land for work. And many believe that countries should be very careful when they do so, for fear they might take jobs away from citizens or that they’ll change the country’s culture. So when many politicians talk about “migrants,” the implicit question is Why aren’t we doing a better job of controlling who gets to come here?

“Refugee”: an official designation for someone forced to flee

Legally speaking, “migrant” is a very general term, but “refugee” is a very specific one. The 1951 Geneva Convention, which is the basis for the international refugee system, defines a refugee as someone who’s forced to leave her country due to persecution based on her “race, religion, nationality, membership of a particular social group or political opinion.”

That applies to many people displaced by war, but not all of them — and it definitely doesn’t apply to people who are forced to migrate due to, say, natural disasters.

Furthermore, someone isn’t officially a refugee until he or she is given that status by some official entity (either an individual country or the office of the UN High Commissioner for Refugees itself). Think of it as an official term, like “citizen” or “permanent resident” — you can’t just say you are unless you have the documentation proving it.

This can get very confusing very quickly. The camps in Lebanon, Jordan, and Turkey hosting people who have fled the Syrian civil war are refugee camps, and the people in them are considered refugees. But if someone leaves one of those camps to go to Europe before being individually processed — or if someone leaves Syria directly for Europe — she’s not technically a refugee.

Are the people coming to Europe migrants or refugees?

In political debates, this nuance tends to get lost. Just like some call it a “migrant crisis” to emphasize that it’s Europe’s right to decide whether they get to come, others call it a “refugee crisis” to imply that there is a humanitarian (and international law) obligation for countries to take them in. Furthermore, they’ll often refer to it as a “Syrian refugee crisis,” to emphasize that people are fleeing one of the worst civil wars on Earth right now — and which can misleadingly imply that everyone trying to enter Europe right now is Syrian.

This insistence on using “refugee crisis” has extended to media outlets as well. In August, Al Jazeera made a big deal of announcing that it wasn’t going to refer to the “Mediterranean migrant crisis” anymore — instead, it would call it a “refugee crisis.” And 72,000 people have signed a Change.org petition urging the BBC to “use the correct term Refugee Crisis instead of Migrant Crisis.”

These statements make it seem clear-cut: These people are refugees, and this is a refugee crisis, and anyone who calls it anything else is agreeing with the right-wingers who want to close the borders. But it simply isn’t that straightforward.

The first problem with trying to decide whether the people coming to Europe right now are migrants or refugees is that they’re not all the same. People who are leaving their home countries because they’re being persecuted often travel alongside those migrating to make a better living.

Maybe a smuggling network has realized there’s a group of people desperate to leave their home countries to flee persecution and willing to pay lots of money. Then once smugglers have established the route, they’re willing to drop prices to transport people who might not need to leave as urgently.

Or maybe people forced to migrate will figure out on their own how to get to a particular country — using smartphones, for example — and once they’ve been welcomed, people from other countries will be inspired to follow in their footsteps.

So in practice, countries aren’t just deciding whether everyone is a refugee or everyone is a migrant — they’re trying to separate one from the other, so that they can let the refugees in and keep the migrants out.

That said, the plurality, if not the majority, of people coming to Europe right now are coming from Syria, Afghanistan, and Iraq — in other words, they’ve been forced to leave the war-torn countries they came from. And they’re overwhelmingly trying to get to the European Union for the purpose of getting designated officially as refugees.

Legally speaking, someone who’s trying to get refugee status is called an asylum seeker. So it actually would be correct — at least more correct than anything else — to refer to the current European crisis as an “asylum-seeker crisis.”

But that doesn’t roll off the tongue as easily as “migrant” or “refugee.” Furthermore, it implies that some people might not actually deserve asylum — that they might be migrants pretending to be refugees, trying to abuse the system and European hospitality.

The deeper problem: How do you draw the line between “coerced” and “forced?”

The reason that “migrant” and “refugee” aren’t perfect opposites to begin with is that even though countries’ immigration policies rely on drawing a firm line between forced and voluntary migration, to the people doing the migrating, that distinction might not exist.

The UNESCO website says that migrants (as opposed to refugees, asylum seekers, or other people forced to migrate) are “people who make choices about when to leave and where to go.” But ultimately, asylum seekers make the choice to leave, too.

When people are literally taken from their home countries against their will, they’re not called asylum seekers — they’re called victims of human trafficking. Everyone else — whether they’re fleeing war, persecution, or poverty — makes the decision that it’s better for them to go somewhere else.

At the same time, though, no one leaves her home country because her life is awesome. Many humanitarians and refugee advocates have explained the current crisis using a quote from the British-Somali poet Warsan Shire:

You have to understand,

No one puts their children in a boat

Unless the water is safer than the land

But many people may feel “the water is safer than the land” because they can no longer trust that their family will survive on the money they can make in their home countries. Or they are leaving countries torn by war and persecution, but only because they don’t have the money to protect themselves or to rebuild their homes after the conflict ends. And while someone might leave Syria because she’s fleeing civil war, she might decide to head to Europe rather than stopping in Lebanon because Europe offers her a better chance to provide for her family.

What’s really needed is a single term that doesn’t try to sort people who are migrating into distinct categories. “Migrant” is the most general term that exists — and in a perfect world, you could simply call someone a “migrant” without making any insinuations about why she’s migrating. In this imperfect world, though, it’s developed the connotation of someone who is living acceptably in her home country and wants to come to another country just to make some more money (which doesn’t exactly describe even most people who are migrating strictly for economic reasons).

The people who call this a “migrant crisis,” like London Mayor Boris Johnson, tend to have their facts wrong — they ignore where people are coming from to say that because they’re “relatively young [and] able-bodied” they must be coming to Europe to work.

People who call it a “refugee crisis,” on the other hand, tend to be more accurate about who is coming and where they are coming from. But they’re using a term that doesn’t yet apply to most of these people. Furthermore, they’re encouraging the distinction between “refugee” and “migrant” — and ignoring the fact that everyone who migrates is making choices, but that those choices are always at least partly coerced.