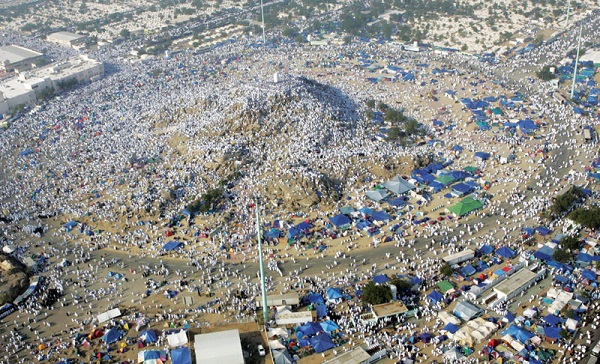 The 9th of Dhu’l Hijjah is known as ‘the Day of `Arafah,’ because the pilgrims at Hajj gather at `Arafah in worship, which is one of the three central integrals of the Hajj rituals. Its importance is such that the Prophet (Allah bless him and give him peace) said, “Hajj is `Arafah.” [Reported in most major hadith works]

The Day of `Arafah is important for those not at Hajj, as well.

Abu Qatada (Allah be pleased with him) related that the Messenger of Allah (blessings and peace be upon him, his family, and companions) said, “Fasting the Day of `Arafah [9thof Dhu’l Hijjah] expiates for two years, one prior and one forthcoming.” [Reported by Muslim, Abu Dawud, Nasa’i, and Ibn Majah]

As such, the scholars concur that it is highly recommended (mustahabb) to fast the Day of `Arafah [9th of Dhu’l Hijjah], even for the one on Hajj in the Hanafi school, if it does not weaken the pilgrim from spending the day busy in worship. [Haskafi, Durr; Kasani, Bada’i`]

The Day of `Arafah is one of the days when supplications (du`a) are more likely to be accepted. [Ibn al-Haajj,al-Madhkhal; Saffarini, Ghidha’ al-Albab]

This is based on the Prophet (Allah bless him and give him peace) saying, “The best of supplications are those on the Day of `Arafah.” [Tirmidhi, Ahmad, Malik, and others] Imam al-Baji explained this as meaning, ‘Having most baraka, the greatest reward, and the quickest in being answered.’ [Baji,al-Muntaqa Sharh al-Muwatta]

The Takbirs of Eid Start on This Day:

Allah Most High commanded us to, “Remember Allah through the appointed days.” [Qur’an, 2.203]

Hakim recorded in his Mustadrak, from both Ali and Ammar that they said, “The Messenger of Allah used to… make thetakbirs from the Fajr prayer of the Day of `Arafah and would stop them after the Asr prayer of the final day of the Days of Tashriq [13th of Dhu’l Hijjah].” There is, however, weakness in the chain of narrators, as Imam Bayhaqi mentioned. There are numerous hadiths that have been mentioned on this, as Imam Jamal al-Din al-Zayla`i expounded in his Nasb al-Raya [2.266-269]

This has been established by consensus of the Companions of the Beloved of Allah, the Prophet (Allah bless him and give him peace). [Mawaffaq Ibn Qudama, al-Mughni 2.126 #1431]

It is necessary (wajib) for every Muslim (male or female, whether praying in congregation or alone) to make the following takbir (declaration of the greatness of Allah) immediately after each obligatory (fard) prayer.

From:   the Fajr Prayer on the 9th of Dhu’l Hijjah (the Day of `Arafah)

To: the Asr Prayer on the 13th of Dhu’l Hijjah.

Rulings related to this:

1. The wajib is to recite this takbir once. If done more than this, it is good. [Haskafi, Durr, quoting `Ayni]

2. The position related above that it is obligatory for 23 prayers, whether in congregation or alone, for every Muslim, is the position of Abu Hanifa’s students, Abu Yusuf and Muhammad ibn al-Hasan, and it is the position acted upon and chosen for fatwa, because of the strength of their evidence and the inherited practice being on it, and because it is more cautious. [Durrand Ibn Abidin, Radd al-Muhtar; al-Fatawa al-Hindiyya, quoting al-Zahidi] Abu Hanifa’s position, that it lasts only 8 prayers, is supported by evidence, too, though, including the practice of some major Companions such as Ibn Mas`ud (Allah be pleased with him), and was taken by some major Hanafi imams, though a minority, such as Ibn al-Humam in hisFath al-Qadir.

4. The followers must perform it, even if the imam leaves it. [Durr]

5. Latecomers [=those who missed one or more rakat of the congregational prayer] must perform it, but after completing their prayer.

6. It is necessary for the congregation to perform it out loud. [Ibn Abidin,Radd al-Muhtar, quoting Quhustani]

7. It is necessary to make the takbirs immediately after the salams. If one talks, loses one’s wudu, or performs other actions completely foreign to the prayer, one has missed the wajib. [al-Fatawa al-Hindiyya;Durr]