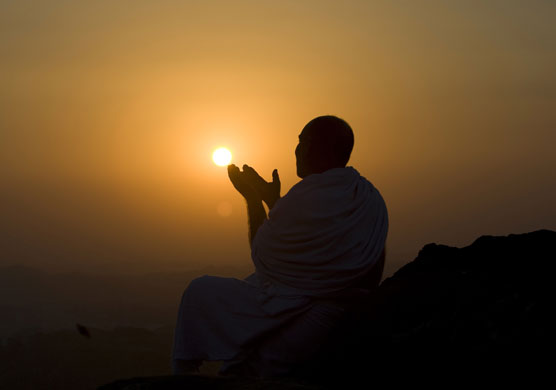 But what plea have they that Allah should not punish them, when they keep out (men) from the Sacred mosque- and they are not its guardians? No men can be its guardians except the righteous; but most of them do not understand. (Quran 8:34)

Millions of Muslims from each and every continent of the world, speaking various languages, with different cultures, of diverse nationalities, all clothed in the same pilgrims robe for men, two unstitched pieces of white pilgrims cloth, right from heads of state, presidents, ministers, down to the poorest of the poor, from the fairest white to the darkest brown and black in colour are gathering in Arabia to perform Hajj. All are bonded in one universal brotherhood of equality, love and peace – al- Islam. The call of Ibrahim (Alai’ his salaam) as mentioned in the Holy Qur’aan:

“Come for Hajj to Baitullah, which is now ready O’ mankind either on foot or on transport from far off lands. ( Quran 22: 26,27)

This is a pledge of Tauhid “oneness” that man makes to Allah. One’s imagination is stirred to take care of one’s spiritual future. To maintain one’s dignity in society through adherence to moral integrity, it is this religious perspective that Allah is giving us in the institution of the Hajj.

Life is a constant movement and a movement with no goal is meaningless, therefore the Pilgrimage symbolises a movement towards Allah. When one leaves for Hajj one leaves one’s routine environment, so this physical movement should move the spirit to rebel against a life guided by evil forces. The accepted Hajj charges one spiritually, cleanses the heart and infuses in us a duty to move towards Allah, The source of beauty, goodness, justice, love and truth. These attributes should be assimilated in the personality of the khalifatullah fil ard and equipped with these beautiful qualities one should strive to submit to the law of Allah.

It is unfortunate to note that today we have turned to money, sex, greed, aggression and dishonesty, as the Qur’aan says,” Wal asr ……sabr” – “By Time, man is in a state of loss….” The cry of the oppressed Muslims of Chechenya, Bosnia, Palestine and other places can be heard clearly and these issues are not even addressed at the largest gathering of Muslims annually. Our Hajj should not only be dry rituals but it should promote internationalism full of benefit for the material and spiritual life. The Hajj provides the Muslim community with an opportunity for social intercourse which can also promote trade, scholarship, knowledge, understanding and political harmony. It should also serve to realise the spiritual yearning and for revival of the values of Islam which the present afflicted and anguished Muslim world needs.

For a century and a half when the Muslim world remained a close knit community under one government, the period of Hajj provided them with an institution for political and administrative uniformity which resulted in the spread of Islam to the four corners of the world, since problems discussed at the centre were acted upon uniformly. The problems of Muslims of various far flung areas were discussed, became known and a spirit of sympathy and brotherhood inculcated. The benefit of Hajj made the Ulema and scholars internationally oriented thinkers. Today we are fifty plus Muslim countries yet we are much weaker. The Sacred Haramayn have been turned into a trade centre for the Muslim world where even non-Muslim countries stock their goods.

Wahabbism which has brought the destruction of various Islamic monuments and tombs of great Muslim personalities, and has ushered in the rise of tall buildings and a spiritless brand of Islam, along with the brazen materialism and consumerism of modern society must be stopped. And the spiritual renewal of Hajj can help us to do that by directing our hearts back to Allah and His Messenger (Salla’llahu’alaihi wa sallam).

And regarding that spiritual love, we who claim to be lovers of the Holy Prophet (salla’ llaahu’alaihi wa sallam), with what face do we go to Madinah? Mullah Ali Qari (d. 1015 A.H. – Radiallahu anhu) in his book Sharah Maslak, the most detailed book of the Hanafies on Hajj says:

“In truth he (the Holy Prophet -salla’ llaahu’alaihi wa sallam) knows your attendance, your standing, your salutations, nay all your actions and condition, departure and station”.

All Imams of Deen from the time of the Holy Prophet (salla’ llaahu’alaihi wa sallam) down to this age, except the short-minded people influenced by Wahabbism, have believed that their is no difference between the life and death of the Holy Prophet (salla’ llaahu’alaihi wa sallam) in his benefit to this Ummah and that he sees his Ummah and their condition, even, with Allah’s permission, their intentions, their wishes, and the inner thoughts inside their hearts. All these things assume such a light before him that nothing is concealed from him by Allah’s power.

Ibn Asaakir (Radiallahu anhu) Qadhi Ayaadh (Radiallahu anhu) and others have written that that portion of earth upon which Rasulullah (Salla’llahu’alaihi wa sallam) lies buried is even higher in rank than the Ka’aba and the Throne of Allah.(quoted by Moulana Zakarriya in his book Virtues of Hajj.)

For Magfirah or Forgiveness, Allah has made the Holy Prophet (Salla’llahu’alaihi wa sallam) the medium. In the Qur’aan Allah says 4:64:

” If these people who transgress the divine laws and fall into sin, come to thee, O! Prophet (Salla’llahu’alaihi wa sallam) and they seek the forgiveness of Allah and if the Prophet (Salla’llahu’alaihi wa sallam) also seeks forgiveness of Allah for them then they will find Allah the Acceptor of repentance and Bestrew of mercy.”

Why did the Holy Prophet (Salla’llahu’alaihi wa sallam) teach him this? Because, he has that status and it was his duty to convey that fact to humanity! The world is based on law and Allah made this law, that the proper channel to approach Him is the Holy Prophet (Salla’llahu’alaihi wa sallam). If anyone wants to go to Allah and attain His love, he must come through the proper channel:

“Say: ‘If you would love God, then follow me, and God will love you, and forgive you your sins; God is All-forgiving, All-compassionate.'” (Quran 3:31)

So after the blessed rites of the Hajj we should grasp at the opportunity to visit him, pray in his rawdah (the area between his pulpit and his grave/home in his mosque), be in his blessed and noble presence, and send abundant blessings on him (Salla’llahu’alaihi wa sallam).

May Allah, the Exalted, accept from the entire Ummah and make the Hajj a means of our purification, rectification, guidance, and bliss.