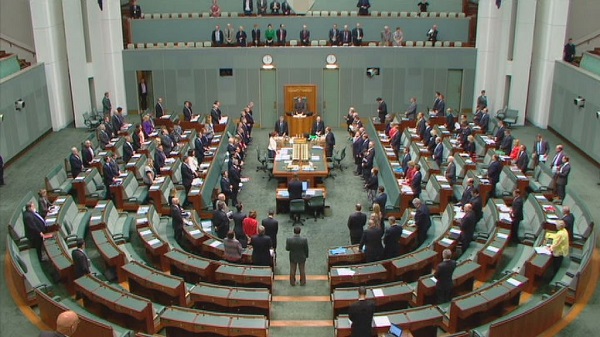 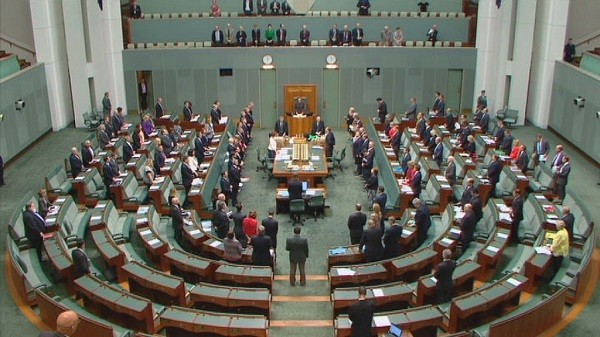 Australia is a nation breaking records at the moment. Not only has it just signed it’s fifth prime minister in five years into office, it’s clocked up 24 consecutive years without a recession—a feat unmatched by any other developed nation.

But as Australia’s decades-long commodity boom dies in the embers of China’s “new normal” economy, and quarterly GDP growth slows to an anemic 0.2%, it’s a country facing nothing short of a crisis.

The problems are so deep that Australia’s new prime minister, ex-investment banker and barrister Malcolm Turnbull, backed his whirlwind run for office on fixing them. “The big economic changes that we’re living through here (in Australia) and around the world offer enormous challenges and enormous opportunities and we need a different style of leadership,” he said at a press conference announcing his challenge to Tony Abbott, who was voted out Sept. 14.

On top of a slowing economy, Turnbull is inheriting a country with the fastest-growing net debt in the developed world, a shrinking federal budget, and an entire generation of constituents who have only known economic prosperity. 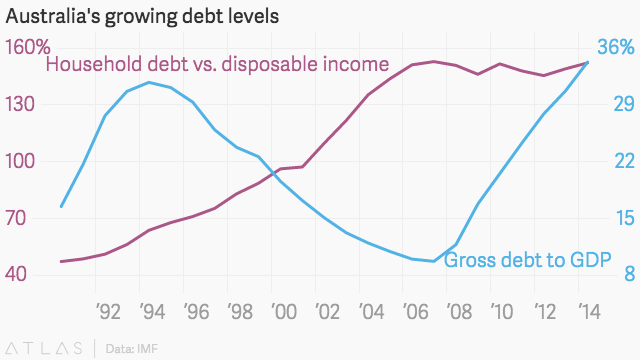 Unlike their thrifty parents, many Australians now consider free spending on housing, cars, branded clothes and designer coffee an entitlement. Tired of Australia’s revolving-door leadership, they will be hard to convince that it is time to pinch pennies now to invest in the future.

“The longer you go without a recession, the more distant the memory becomes and the impetus to keep investing in that next wave of growth and job creation is less as a result. It seems easy, especially when you have a trade bubble that just floods you with money,” explained David Hetherington, an economist with Australian public policy think-tank, Per Capita.

An unprecedented trade boom Australia was certainly flooded with money in recent decades.
Outside of an 1850s gold rush, Australia’s now-fading resources boom was the largest in the country’s history and the wealth it generated was huge. Paul Bloxham, Chief Economist with HSBC Australia, said it delivered the single biggest “increase in terms of trade the country has ever seen”.

Rising global commodity prices and China’s then-insatiable demand for minerals and metals saw the value of Australia’s exports of ‘crude materials’, which includes iron ore, grow 705% from AUD$1.2 billion at the beginning of 2001 to AUD$10.4 billion at the end of 2013, according to data from the Australian Bureau of Statistics (ABS). 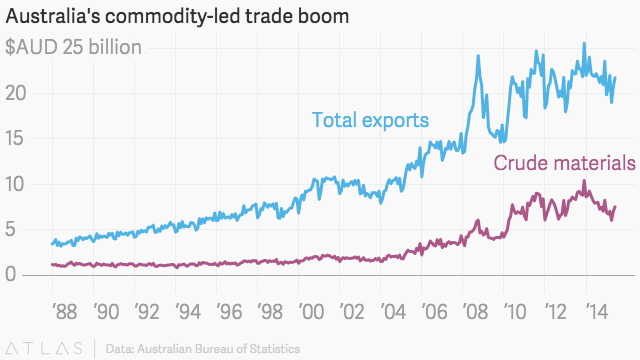 One of Australia’s more eloquent ex-Prime Ministers, Paul Keating, famously described the luck of the government at the time in inheriting such wealth as being “hit in the arse by a rainbow.”

With this huge rise in exports, investment spending by the mining sector increased from 2% to 8% of GDP and unemployment fell from a high of 7.6% at the start of 2002 to average 5.2% in the next decade, according to the ABS. 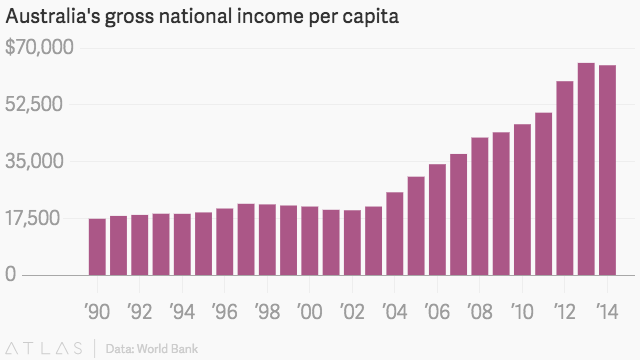 Households prospered from higher wages and strong employment and started spending on things like new cars and overseas travel, something the strengthening Australian dollar made even more affordable. Governments of the day also blessed Australia’s consumers with income tax cuts, and increases to family allowance payments and pensions, making families feel even wealthier. The Australian government doled out seven consecutive years of personal income tax cuts starting in the 2003/04 fiscal year, and marginal tax rates for people on incomes of AUD$35,000 fell from 30% to 15%.

Australian consumers started taking out unprecedented levels of debt—household debt in the country is more than triple what it was during Australia’s 1991 recession, at an amazing 154%. “Australia is living large. It has been a place awash with money and you see that in every aspect of life in Australia,” said Hetherington.

But as Australia’s economic growth falters, it is clear the nation partied too hard during the boom, and could be about to wake up with an empty wallet and a whopping hangover.

The tax cuts and hand-outs meant the Australian government was spending as freely as the consumers, something the IMF and numerous Australian economists – including Hetherington, Ross Garnaut and Jim Minifie, to name just a few – have highlighted.

The nation’s governments saved just AUD$1 out of every AUD$19 it received in additional revenue during the commodity boom, one comprehensive report from the Grattan Institute concludes. “AUD$180 billion was either given back to tax payers in the form of tax cuts…or was spent,” Jim Minifie, the author of the report told Quartz. “So the government balance sheet hardly improved due to the boom.”

That left Australia with dangerously rising government debt levels as the boom ended. 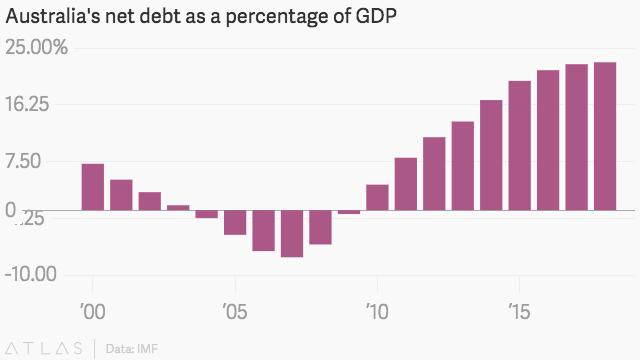 The governments of the day weren’t entirely neglectful. They initially paid down Australia’s debt and dipped into the budget to increase spending during the global financial crisis, which ensured Australia remained one of the few OECD countries to avoid a recession. The Liberal government also established a sovereign wealth fund, called the “Future Fund”, to cover Australia’s future pension liabilities.

However, unlike other sovereign wealth funds in established countries that have also been lucky enough to live through similar commodities booms —like Norway and Chile—this money is effectively already spent. In fact, the federal government’s unfunded super liabilities for politicians, judges, public servants and military personnel was estimated at over AUD$200 billion in 2013, while Australia’s Future Fund had assets of just AUD$88.9 billion at the end of June 2013.

Australia’s lack of savings during the boom years has left the nation in a precarious position, especially now China – which has been Australia’s largest export market since 2009 – is fast running out of manufacturing steam.

Commodity prices have fallen 55% from their 2011 highs, according to the Reserve Bank of Australia’s commodity price index. Australia’s deficit on it current account balance – a measure of its trade that includes overseas income – blew out an eye-watering 41% in the June quarter to AUD$19 billion as a result, a level not seen since the global financial crisis.

Australia’s foreign debt now hovers just below AUD$1 trillion, and the IMF has warned that the nation’s present debt trajectory is the worst in the developed world.

A word not heard in 24 years in Australia–recession–is now being uttered with growing frequency.

“I think the current state of the Australian economy is parlous and the outlook is pretty dim,” said Hetherington, who noted that Australian governments had acted as though high commodity prices “would be around forever.”

Others disagree with these dire predictions, and argue that Australia’s shift should be compared to China’s, which is moving away from manufacturing to a more services-based economy.

“I think Australia’s ‘R’ word is more likely to be rebalancing than recession.” HSBC’s Bloxham said. “I think growth is rebalancing from being lead by mining investment to being lead by other sectors of the economy.”

Building the road ahead

Australia has been pursuing new export growth and recently signed free trade deals with Japan and Korea, the nation’s top trade partners after China. But whether recession or rebalancing, the new government will have their economic work cut out for them. Interest rates are at an all-time low and the nation’s housing market looks positively bubbly, which limits their options for stimulating growth.

Garnaut and Max Cordon – together two of Australia’s most respected economists – have prescribed spending on infrastructure as a way to see the Australian economy through its “dog days”, as Garnaut describes them. It’s something Australia sorely needs—as investment went into new mines and related infrastructure to help deliver the resources China needed to build its shiny new roads, ports and railways, development of Australia’s own infrastructure outside of the mining sector was comparatively lackluster.

Turnbull has championed himself on economic leadership –but he needs to get on board and take control of his country’s economy fast enough to avoid a crash.