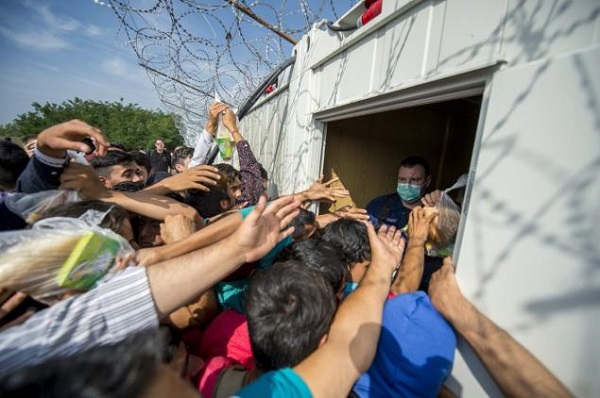 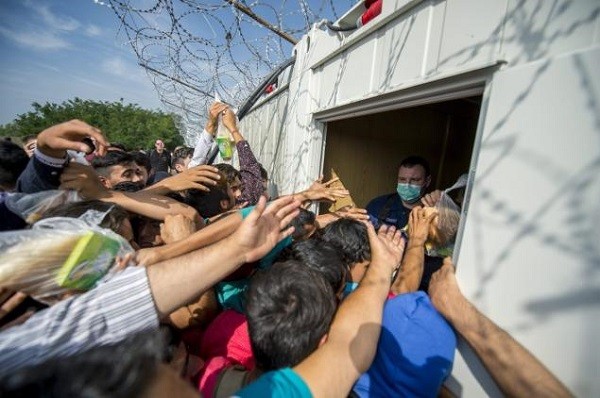 RÖSZKE, HUNGARY— Hungary on Tuesday declared a state of emergency in two southern counties as part of a crackdown on migrants trying to reach the European Union.

The move came hours after Hungary closed the gap in its border fence with Serbia that migrants had for weeks used as a main, unofficial entry point.

Local volunteers handing out food and supplies said a couple of hundred people crossed through there Monday.

Monday evening, the tents the volunteers had set up near the fence which, until a few days ago, were full of migrants resting after a long journey, were completely empty.

Only a kilometer or so away, at the legal crossing point from Serbia into Hungary, police had set up a barrier to keep journalists or volunteers away while the migrants arriving at the border were being whisked away in buses to the Röszke train station.

At the train station, people sat for hours, either in buses, or by the side of the tracks, waiting for the next train to arrive. Tired, sleepless children wailed as volunteers distributed food and water.

None of the migrants had been required to show any papers or register at the border of Hungary. Many did not know where they were being taken. Most did not want to apply for asylum in Hungary.

Hanging out of the window of a bus, Ali Hatim from Iraq said no one at the border asked him for papers and he hoped the Hugarians would not register him. But he seemed resigned to the fact that if they forced him to register, he had no choice.

There seemed to be a lot of confusion, largely resulting from the inability to communicate. Most of the migrants did not speak Hungarian and the police guiding them through gestures and occasional English words did not know Arabic.

However, some migrants who spoke English had been told the train would take them to the Hungarian border village of Hegyeshalom, where they could walk over into Austria and take a bus or a train to Vienna.

A record 9,380 people entered Hungary Monday, Hungarian officials said. Hundreds more spent the night on the Serbian side, waiting for the crossing to open.

Hungarian officials said Tuesday they also have closed two official border crossings due to what they said were inadequate controls on the Serbian side.

Hungarian Prime Minister Viktor Orban has announced that under new security measures that went into effect Tuesday his administration will be tough on those who cross the border illegally.

Officials announced Tuesday police have detained at least 60 people under the new law, which could see illegal border crossings punished by up to three years in jail.

The law took effect a day after European interior ministers failed to agree on a plan to relocate 120,000 migrants across the European Union.

While a majority of the ministers support the plan for binding quotas, many of the objections came from Eastern European nations, including Hungary and Slovakia. Their borders are among the first stops for migrants trying to get to Western Europe.

The ministers did agree on an earlier plan to relocate 40,000 migrants now in Greece and Italy.

Some European leaders blame Germany for openly welcoming migrants to the continent trying to flee war and terror in Syria and elsewhere. Germany has become increasingly frustrated with some EU members who are reluctant to share the burden.

More than 430,000 migrants seeking a better life, including refugees from Syria and Iraq, have crossed into Europe this year. Migration watchers say nearly 3,000 have died trying.