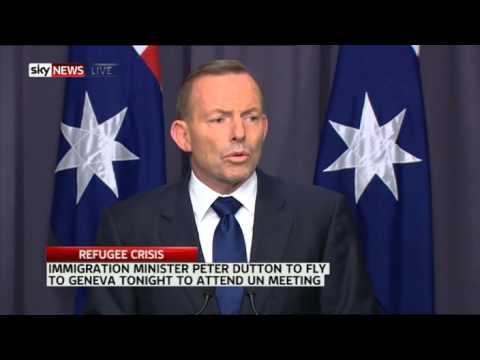 SYDNEY—Australia has offered to resettle more asylum seekers from Syria, but also says it will not increase overall refugee numbers.Images of a lifeless Syrian child washed up on a beach in Turkey have shocked the world.

Australian Prime Minister Tony Abbott has spoken of his horror over the toddler’s death.

Australian Immigration Minister Peter Dutton will hold talks in Geneva with the United Nations High Commissioner for Refugees to discuss what more Canberra can do.

“We are already the most generous country in the world on a per capita basis when it comes to dealing with refugees through the UNCHR. We are determined to do more in response to the crisis in this very troubled part of the world,” said Abbott.

The Abbott government has said that Australia’s total refugee intake of 13,750 will not be increased, meaning that as more Syrians are granted asylum, refugees from other trouble spots, such as Afghanistan and Burma, will have to wait.

The opposition Labor party’s immigration spokesman Richard Marles said the government should be doing much more to help the desperate.

“It’s not enough. If all that’s being offered is a reprioritization of an existing program, well then in effect the Government’s not offering anything at all,” said Marles.

Canberra has authorized previous one-off increases in its refugee intake to help with refugee crises, including during the Kosovo conflict in the 1990s, although the government has rejected the suggestion of an increase now.

It is exactly two years since the Abbott government secured a landslide election victory, promising tough policies to stem a steady flow of asylum seekers arriving by sea.

The military was given orders to tow or turn back migrant boats, while the occupants of vessels that did make it to Australia’s northern waters were taken to offshore processing camps in the South Pacific.

Human Rights Watch called such policies the result of “scare mongering politics” that have undercut refugee rights, although ministers continue to stress that many lives have been saved as a result.