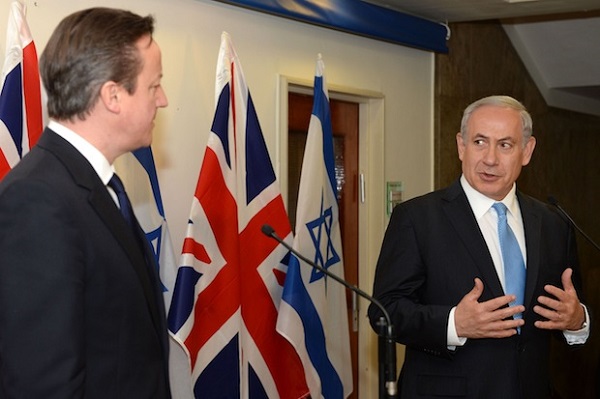 The British government used the “civilising” narrative to deny sovereignty, justify the colonisation process and build an empire. It argued that there was a “majority of German-speaking” population to allow the surrender of the Sudetenland to Nazi Germany in 1938, and it defended the fallacy of weapons of mass destruction in Iraq to support an illegal war.

These civilising or “national security” justifications were wrongful foreign policy narratives that have brought extensive suffering and had disastrous and long-term implications.

The British government has recently responded to a popular petition to arrest the prime minister of Israel, Benjamin Netanyahu, on charges of war crimes when he arrives in London – a petition that has already gathered more than 75,000 signatures.

The government highlighted that Netanyahu, as every head of state, enjoys inviolability and complete immunity from criminal jurisdiction, an unjust remnant and privilege of international customary law that impedes any foreign court to judge Netanyahu for his crimes.

Nevertheless, this argument was expected as it follows a traditional and restrictive interpretation of international law.

What was received with surprise was the rest of the response in which the British government made clear that it recognises “Israel’s right to take proportionate action to defend itself” and condemns “the terrorist tactics of Hamas who fired rockets on Israel, built extensive tunnels to kidnap and murder, and repeatedly refused to accept ceasefires”.

In case the message was not clear, the government ended the answer stressing that “the UK is a close friend of Israel, and we enjoy an excellent bilateral relationship built on decades of cooperation…”

These words seem to completely misunderstand the reality of what happened in Gaza in the summer of 2014.

Defining the attack on Gaza as an act of self-defence by the Israeli authorities is a jibe to history; an insult to the memory of the 2,100 people, including 500 children, killed by the Israeli army.

It is also an act of hypocrisy, with few antecedents, from a country that claims to be a firm defender of human rights and accountability.

The UK government’s answer completely neglected the fact that Gaza is a population under blockade and occupation, whose human rights are violated constantly, and where discrimination prevails.The government’s words fail to take note of the fact that the UN Independent Commission of Inquiry on Gaza (COI) concluded that Israeli authorities committed war crimes during Operation Protective Edge, and that Israeli soldiers from the NGO, Breaking the Silence, reported that the Israeli army committed serious violations of international humanitarian law.

It seems like the government has quickly forgotten the killing of four Palestinian children playing on a beach, the bombardment of UN schools, the roof-knockings and the declarations of certain Israeli leaders – all clearly pointing to international crimes.

Finally, the government remained silent about the impunity that these crimes have received in the Israeli jurisdiction: “Accordingly, the Military Advocate General ordered that the investigation file be closed without any further legal proceedings – criminal or disciplinary – to be taken against those involved in the incident”, is the common final decision in Israeli military investigations against its soldiers.

The rationale behind the invasion of Gaza remains unclear at the very least. The disproportionate use of force resulting in so many civilian casualties and the intensity of the attack between both forces invite us to believe that the invasion was unlawful and unjustified – the last attempt from the Israeli government to debilitate and demoralise Gaza’s population, weaken its government and intensify its iron grip on the area.

What is appalling is that British authorities who could have limited themselves to providing a purely legal response have decided to support a foreign policy narrative that is not only partial, but also factually and ethically wrong and limited to Israel’s right to security.

This artificial narrative attempts – once again in British foreign policy – to justify the unjustifiable: an exchange of human suffering for power accumulation. In this case, the abandonment of Gaza – a defenceless and oppressed population in need – in exchange for the stability of British international relations.

The Palestinian population residing in Gaza continues being collectively punished one year later, unable to reconstruct their homes, their water and power plants, their hospitals and their lives.

This is a population whose physical survival is threatened each day due to the shortage of basic services and infrastructure – a population whose calorie intake has been limited by Israeli authorities to the minimum dispensable to avoid malnutrition.

The UN already considered that Gaza would not be habitable by 2020.

It is interesting to draw a comparison between this and the situation in Sudan and its president, Omar al-Bashir.

Bashir is also suspected of the commission of war crimes and crimes against humanity to such an extent that the International Criminal Court (ICC) took the decision to issue a warrant for his arrest.

Would the UK government maintain its position that, as the head of state, Bashir would be immune from arrest and detention in the UK should he take the decision to travel, and thus flout the order of the ICC?

It is hoped not – but it remains a legitimate concern.

What must be understood, however, is that there is a distinction between national and international jurisdiction.

In the case of Bashir, there is an international arrest warrant in force, issued by the ICC – an institution to which the UK is a state party and, therefore, obligated to act should he arrive in the UK.

The situation concerning Netanyahu is wholly domestic at this stage in that, as much as there may be evidence to give rise to allegations of war crimes, he has not yet been indicted by an international court, and, therefore, the UK government is correct in that he does enjoy head of state immunity and, thus, could not be arrested in the UK.

It is a double standard, and it does smack of inconsistencies; however, that is the legal position.

But, the UK must review its foreign policy since, at present, there are clear double standards insofar as to which regimes are supported despite allegations of international crimes being committed, and which regimes it seeks to criticise for the same reasons.

The civilising theory and the British colonisation efforts brought misery and tragedy to the Middle East and are intrinsically related to the conflicts and the instability of the region.

However, the British government fails to learn from its past mistakes – this new incorrect narrative on the Israeli-Palestinian conflict constitutes a new foreign policy flaw that will likely perpetuate the long-lasting injustice of the area, obviate further atrocities, and prolong the suffering of entire populations.

Once again, the British government prioritises power and stability over justice and human dignity, and it is time for the British public to wonder whether this is the position they want to represent them.