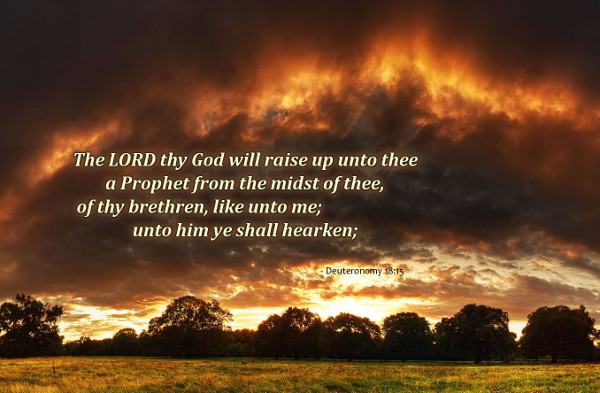 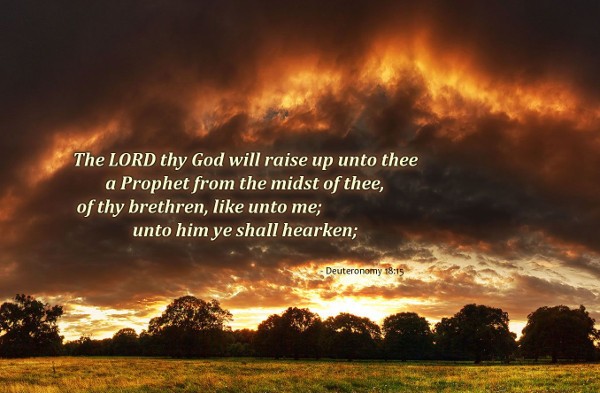 The Bible is the sacred scripture of Judaism and Christianity.

Jesus and the Apostles are believed to have spoken Aramaic. Aramaic continued in wide use until about AD 650, when it was supplanted by Arabic. The present day Bible is not, however, based on the Aramaic manuscripts, but on Greek and Latin versions.

Quoting the Bible prophecies does not entail that Muslims accept the present day Bible in its entirety as God’s revelation.

It is not a pre-condition of acceptance that a prophet be foretold by an earlier prophet.

Moses was a prophet to Pharaoh even though he was not prophesized by anyone before him.

Abraham was God’s prophet to Nimrod, yet no one prophesized his coming.

Noah, Lot, and others were true prophets of God, yet they were not foretold. The evidence of a prophet’s truth is not limited to old prophecies, but it includes the actual message brought by him, miracles and more.

Discussing prophecies is a delicate matter. It requires sifting through Bible versions and translations, recently discovered manuscripts and searching out Hebrew, Greek, and Aramaic words and investigating them.

The task becomes especially difficult when: “prior to the printing press (15th century), all copies of Bibles show textual variations.” This is not an easy subject for lay people. For this reason, the best testimony comes from ancient and modern experts in the area who acknowledged the prophecies.

We have records of early Jews and Christians, both monks and rabbis, who witnessed that Muhammad was the fulfillment of specific Bible prophecies. The following are some examples of these people.

Pre-Islam Jews and Christians of Arabia were awaiting a prophet. Before the appearance of Muhammad, Arabia was home to Jews, Christians, and pagan Arabs who, on occasion, went to war with each other.

The Jews and Christians would say: “The time has come for the unlettered prophet to appear who will revive the religion of Abraham. We will join his ranks and wage fierce war against you.”

When Muhammad actually appeared, some of them believed in him, and some refused. This is why God revealed:

The first witness was Buhaira, the Christian monk, who recognized Muhammad’s prophethood when he was still young and told his uncle:

“…a great fortune lies before your nephew, so take him home quickly.”

The second witness was Waraqah ibn Nawfal, a Christian scholar who died soon after a solitary meeting with Muhammad. Waraqah attested Muhammad was the Prophet of his time and received revelation exactly like Moses and Jesus.

The Jews of Madinah were anxiously awaiting the arrival of a prophet. The third and fourth witnesses were their two famous Jewish rabbis, Abdullah ibn Salam and Mukhayriq.

The sixth and seventh witnesses were also Yemeni Jewish rabbis, Wahb ibn Munabbih, and Ka’b al-Ahbar (d. 656 CE). Ka’b found long passages of praise and the description of the Prophet prophesized by Moses in the Bible.

“I (God) will raise them up a Prophet from among their brethren, like unto thee (Moses), and will put my words in his mouth; and he shall speak unto them all that I shall command him.”

Many Christians believe this prophecy foretold by Moses to be in regards to Jesus.

Indeed Jesus was foretold in the Old Testament, but as will be clear, this prophecy does not befit him, but rather is more deserving of Muhammad (peace be upon him).

The verse in discussion is explicit in saying that the prophet will come amongst the Brethren of the Jews.

Abraham had two sons: Ishmael and Isaac. The Jews are the descendants of Isaac’s son, Jacob.

The Quran says of Muhammad:

{Neither does he speak out of his own desire: that [which he conveys to you] is but [a divine] inspiration with which he is being inspired.} (Quran 53:3-4)

This is quite similar to the verse in Deuteronomy 18:18:

“I will raise them up a Prophet from among their brethren, like unto thee, and will put my words in his mouth; and he shall speak unto them all that I shall command him” (Deuteronomy 18:18)

Prophet Muhammad came with a message to the whole world, and from them, the Jews. All, including the Jews, must accept his prophethood, and this is supported by the following words:

“The LORD thy God will raise up unto thee a Prophet from the midst of thee, of thy brethren, like unto me; unto him ye shall hearken.” (Deuteronomy 18:15)

4- A Warning to Rejecters

“And it shall come to pass, [that] whosoever will not hearken unto my words which he shall speak in my name, I will require [it] of him.” (in some translations: “I will be the Revenger”).

Interestingly, Muslims begin every chapter of the Quran in the name of God by saying:

“‘In the Name of God, the Most-Merciful, the Dispenser of Grace.”

The following is the account of some scholars who believed this prophecy to fit Muhammad.

Abdul-Ahad Dawud, the former Rev. David Benjamin Keldani, BD, a Roman Catholic priest of the Uniate-Chaldean sect. After accepting Islam, he wrote the book, ‘Muhammad in the Bible.’  He writes about this prophecy:

“If these words do not apply to Muhammad, they still remain unfulfilled. Jesus himself never claimed to be the prophet alluded to.  Even his disciples were of the same opinion: they looked to the second coming of Jesus for the fulfillment of the prophecy (Acts 3: 17-24).

So far it is undisputed that the first coming of Jesus was not the advent of the Prophet like unto thee and his second advent can hardly fulfill the words. Jesus, as is believed by his Church, will appear as a Judge and not as a law-giver; but the promised one has to come with a “fiery law” in his right hand.”

Muhammad Asad was born Leopold Weiss in July 1900 in the city of Lvov (German Lemberg), now in Poland, then part of the Austrian Empire.

He was the descendant of a long line of rabbis, a line broken by his father, who became a barrister. Asad himself received a thorough religious education that would qualify him to keep alive the family’s rabbinical tradition.  He had become proficient in Hebrew at an early age and was also familiar with Aramaic.

He had studied the Old Testament in the original as well as the text and commentaries of the Talmud, the Mishna and Gemara, and he had delved into the intricacies of Biblical exegesis, the Targum.

Commenting on the verse of the Quran:

{and do not overlay the truth with falsehood, and do not knowingly suppress the truth} (Quran 2:42)

“By ‘overlaying the truth with falsehood’ is meant the corrupting of the biblical text, of which the Quran frequently accuses the Jews (and which has since been established by objective textual criticism), while the ‘suppression of the truth’ refers to their disregard or deliberately false interpretation of the words of Moses in the biblical passage:

‘The Lord thy God will raise up unto thee a prophet from the midst of thee, of thy brethren, like unto me; unto him ye shall hearken.’ (Deuteronomy 18:15)

And the words attributed to God himself, ‘I will raise them up a prophet from among thy brethren, like unto thee, and will put my words in his mouth’ (Deuteronomy 18:18).

The ‘brethren’ of the children of Israel are obviously the Arabs, and particularly the musta’ribah (‘Arabianized’) group among them, which traces its descent to Ishmael and Abraham: and since it is this group that the Arabian Prophet’s own tribe, the Quraish, belonged, the above biblical passages must be taken as referring to his advent.”

To be continued… See here.