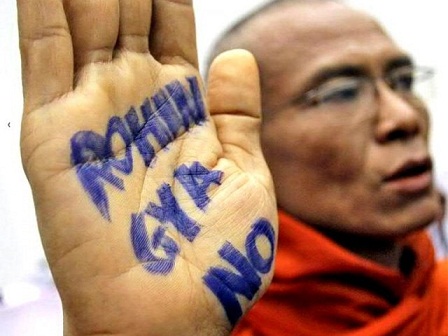 Burma is at a very particular stage in its development. In recent years, it has shown a new willingness to engage with the international community. It has also begun to open new space for freedom of expression and civil liberties.

After many years of political isolation and sanctions on Burma, the international community has welcomed these developments. But there is also a recognition that the country still needs to overcome many obstacles.

A main concern is that the military still maintains a great deal of control in the country and in its parliament. Earlier this summer, Burma’s parliament voted to maintain the military’s veto over constitutional change. This is a setback for Burmese democracy, amid ongoing constitutional reform negotiations and with elections approaching on November 8, 2015.

Peace talks are also underway, though conflict continues between the central government and a number of armed ethnic groups. Ethnic minorities in Burma, of which there are nine main groups and a number of smaller ones, have many legitimate grievances. Sustainable, political and economic reconciliation relies heavily on leaders’ abilities to redress these grievances and to chart a more inclusive future for the Burmese society.

Among the most marginalized ethnic groups in Burma are the Rohingya Muslims.

According to the organization Refugees International, the Rohingya are also one of the largest stateless groups in the world. Persecuted since the 1940s, an estimated 1 million Rohingya today live in exile. Another 1.3 million Rohingya still live in Burma, all but 40,000 of them officially stateless.

Mostly, they live in Rakhine state, close to Burma’s border with Bangladesh, where they are perceived to be economic migrants. This, however, is a false perception. “For hundreds of years, they have been migrating from the Middle East as Arab traders, shall we say, a Muslim‑faith visible minority,” says Peter MacArthur, Director General of South and Southeast Asia and Oceania with Canada’s Department of Foreign Affairs, Trade and Development.

“Only since 1948, when independence occurred from the British, has there been this kind of tension. The current government in Burma is trying to discriminate between those who have been there since 1948 and those who were already there before 1948, when the country gained independence.”

Despite their long history in Burma, Rohingya statelessness is embedded in government policy.

The 1982 Burma citizenship law stripped the Rohingya of citizenship, making them resident foreigners instead. This caused the Rohingya ethnicity to be omitted from a recent national census. Moreover, Burmese law prevents non-citizens from obtaining citizenship. As such, Rohingya children born in Burma are prevented from obtaining citizenship even though their families may have been there for generations. This is despite Burma’s ratification of the United Nations Convention on the Rights of the Child, which guarantees every child’s right to have her birth registered, to have a nationality, and to have these rights protected under national law.

The Rohingyas’ lack of citizenship also means that they have been restricted from travelling within Burma and abroad – in direct violation of Article 13 of the Universal Declaration of Human Rights and Article 12 of the International Covenant on Civil and Political Rights. The United Nations Refugee Agency has urged Burma to review its citizenship law, offering financial, technical and legal support, but to no effect.

Other restrictions on the Rohingya have been less widely reported. In July 2012, Myanmar’s Minister of Home Affairs, Lieutenant-General Ko Ko, told parliament that the authorities were, “tightening the regulations [against Rohingya] in order to handle travelling, birth, death, immigration, migration, marriage, construction of new religious buildings, repairing and landownership and [the] right to construct building[s].” The Rohingya also face restrictions in accessing education and employment.

Adding to these problems, in recent years the Rohingya have been targeted by Buddhist ultra-nationalists. Violence against the Rohingya has been frequently fueled by extremist monks, many of whom are important community leaders. Authorities have all too often stood and watched as Rohingya homes and mosques have been burned, and shops looted.

Today there is unprecedented international awareness of the plight of the Rohingya.

Rohingya communities were amongst those hardest hit by deadly flooding in Early August. This was accompanied by reports that security forces violently turned Rohingya away from flood shelters, which, they allegedly said, had been set up for ‘those who belong to this country’.

In early May, media reported on the discovery of mass graves of migrants in southern Thailand. Shortly thereafter, the BBC broadcast shocking images of Rohingya boat people stranded and left adrift by their traffickers.

The same month, the former Special Rapporteur on the situation of human rights in Burma, Tomás Ojea Quintana, said: ‘‘The Rohingya are in a process of genocide.’’

This is clearly only a temporary solution to help those who have risked their lives to escape persecution in Burma, though other initiatives are underway. The government of Bangladesh, for example, has put aside $59 million for its Coast Guard. There have also been a number of arrests of human traffickers.

For the Rohingya, however, the only sustainable solution to decades of persecution and neglect is for them to be fully recognized as a unique ethnic group, and citizens in Burma.

People, governments and NGOs around the world have long stood with the people of Burma, pushing for greater freedom, democracy and respect for human rights. Today, as we welcome and encourage Burma’s greater engagement with the international community, it is important that we continue to sustain pressure on Burma’s leaders to build a democracy that is open and free, inclusive of all ethnic groups in Burma, accepting of Buddhists, Muslims and Hindus alike, and home to the Rohingya.