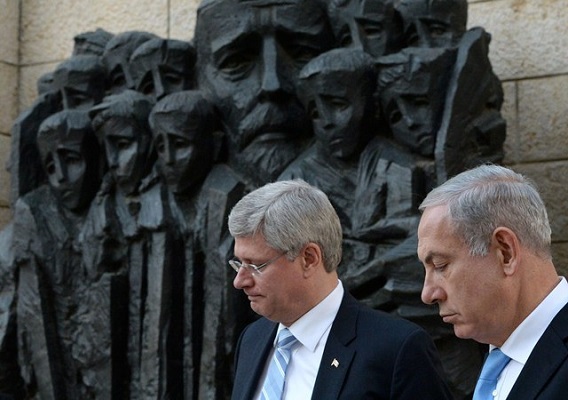 There is  a recent news reports that Hollywood producers are going to boycott Penelope Cruz and her husband Javier Bardem, both Oscar winners, for their signing an open letter condemning “the genocide perpetrated by the Israeli occupation army.” The Spanish letter criticized Israel’s 2014 attack on Gaza and was also signed by 100 “leading figures in the film industry, including director Pedro Almodovar.”

Other prominent supporters of the Palestinians and critics of Israel’s treatment include former US President Jimmy Carter, Nelsen Mandela, Arch Bishop Desmond Tutu and noted author Alice Walker. British MP Jeremy Corbyn who is widely expected to win the leadership of the British Labour Party is also a strong supporter of the Palestinians. The Vatican has now officially recognized the State of Palestine.

The United Nations General Assembly has long supported the rights of the Palestinians by overwhelming majorities. The supporters of Israel in these votes are only a handful. Canada and the United States are almost always in Israel’s camp. There is also a statement released on August 18, 2015 signed by over 1,000 Black activists, scholars and artists “supporting Palestinian freedom and equality” and supporting Boycott, Divest and Sanction (BDS) against Israel.

In Europe the support for the Palestinians is growing stronger every day. Also growing in Europe is support for the BDS Israel movement and calls for sanctions over Israel’s “Jewish only settlements” in the Occupied Territories.

Many Jews are also supportive of human rights for the Palestinians. Two Jewish organizations that support BDS in North America are the Jewish Voice for Peace and Independent Jewish Voices (Canada). There are many Israelis who also do not support the right-wing policies of the Netanyahu government. There is a list of more than a thousand Israeli academics and writers that are considered anti-Zionist by supporters of Zionism in Israel

Many Academics around the World, including many in the United States and Canada, have long spoken out on the issue of equal rights for the Palestinians and have been very  critical of Israel’s military actions. Many leading academic organizations, including those in Britain and Ireland, have declared their support for the BDS campaign. The Middle East Studies Association (MESA) has long been a supporter of the Palestinians and a critic of Israel’s policies. Virtually every university in North America has an active pro-Palestinian presence. Many student unions and academic associations have passed resolutions in support of BDS.

Clearly there has been considerable movement around the World to support the Palestinian cause. This is especially the case after Netanyahu’s government’s attack on Gaza in 2014 and the earlier attack in 2009. However, while there is much movement on the ground, the main stream media, the major political parties and most elected politicians in Canada and the United States strongly support Israel. The rise in support for the Palestinians is not reflected in the political power structure.

Supporters of Israel try to portray these critics as marginal and even “anti-Semitic” but these claims are becoming harder and harder to seen as believable. However, the rise in support for Palestinians in Canada and the United States has the supporters of Israel in a panic mode.

The federal election in Canada is occurring on October 19, 2015.  The question is who do you vote for if you are concerned about human rights for the Palestinians and that they deserve equal treatment and the right to live in dignity?

In Canada this issue is complicated. There are no really good choices among the three main political parties.

The NDP gives lip service to Palestinian rights but almost always does not let anyone who actually criticizes Israel or support’s BDS to run for the NDP. There are at least five NDP candidates who have been banned or come under attack for their views on the Palestinian issue. One NDP Member of Parliament from Quebec left the NDP over this issue. Sana Hassainia wrote on her web site, “My decision to leave the NDP was precipitated, among other things, by the party’s positions on the Israeli-Palestinian conflict.” Libby Davis, the Deputy Leader of the NDP, decided not to run this time around. No doubt the treatment given to her over comments she made opposing the Israeli Occupation played a factor in her decision. Gone are the days when New Democrat MPs like Derek Blackburn, Howard McCurdy, Svend Robinson and Ian Waddell could openly be supportive of the Palestinians.

This pattern of refusals is more evidence of censorship and anti-democratic behavior in Tom Mulcair’s Federal NDP. Perhaps the NDP should adopt the slogan “no Palestinian, Arab or Muslim or non-Zionist Jew or person concerned about Palestinian human rights should apply.” This NDP purge is symptomatic about a much larger problem in Canadian politics.

The Liberals are no better. Justin Trudeau has said he was opposed to BDS at a lecture at McGill University. He also implied support for BDS was anti-Semitic.  On the plus side Justin Trudeau has spoken out against the Conservative scare tactics against the Muslim Community and he resisted calls not to speak to a Muslim youth organization.  At one time there were a number of Liberal MP’s who supported human rights for the Palestinians. They included Yvon Charbonneau, Marcel Prud’homme, and Ian Watson. Pierre Debane, who is Palestinian, served in Prime Minister Trudeau’s cabinet. However, these few voices posed little threat to the pro-Israeli narrative that dominated Canada’s political culture at the time.

On a personal note I was black listed by the federal Liberals under Stephane Dion and not allowed to run for a Liberal nomination because of my support for Palestinian human rights. I was cleared by the Ontario Liberal Party and allowed to run for a provincial nomination a few years earlier. The “official reason” for my being banned was that I distributed an email which supported the call for a meeting between Liberal Leader Dion and over thirty Arab and Muslim organizations and which included 5 Jewish organizations to discuss issues on the Middle East.

I was a past president of a Federal Liberal Riding Association and a former member of City Council. Also a Certified Specialist in Citizenship and Immigration law. Actually I was approved by 2 out of the 3 members of the so called review committee and all of my publications were vetted and approved by a lawyer. I was given this information by someone directly involved with the review process. However, the Zionist member of the Review Committee sent my case to the higher echelons and I was black-listed. I was told that this person had a virtual veto on approving candidates and no one who had criticized Israel was allowed to run. Many other individuals who are sympathetic to the Palestinians have been barred for running for the Liberals. See the article written by Linda Belanger.

Also of interest is another article by Linda Belanger.

The Conservatives are just plain horrible. At one time MP’s like Bob Corbett were very good on the issue. Bob Stanfield and even former Prime Minister Joe Clark were not that bad. Stanfield wrote a good report on the Middle East for Joe Clark. Harper is just plain horrible as are most of his associates like Jason Kenney and John Baird. They all think, or at least argue, that any criticism of Israel is anti-Semitic. They are silent on the issue of racism against Palestinians and voice no criticism on Israel’s many attacks on the Palestinians. The Conservatives frequently publicly attack Muslims and stoke fears of Islamic terrorism and Sharia law here at home and in the Middle East.

Elizabeth May is not perfect but the Green Party is at least letting people like Paul Manley who the NDP banned run for them. Canadians for Justice and Peace in the Middle East (CJPME) cancelled an invitation to Elizabeth May after she made some strong comments in support of Israel and against the Palestinians.  Elizabeth May, however, is clearly more democratic and open minded on the issue of Palestinian rights than the other federal party leaders.

WHAT IS TO BE DONE?

I encourage people to make donations to Paul Manley and to other progressive candidates who are supportive of human rights for the Palestinians. I have given $100 to Paul Manley and $100 each to two Liberal Candidates who are friends. I have also made a donation to Linda McQuaig, a prominent author and journalist, who running for the NDP and is pro-Palestinian and excellent on the environment and economic issues. It only costs $25 to make a $100 donation to a candidate or political party up to $400. It is easy to find a suitable candidate on the net or Party website. My $400 donation will cost me only $100 once I get the deduction off of my income that is to be paid.

Now is the time to get involved. Strategic voting to defeat the Harper Conservatives is, in my opinion, the best option. Supporting the Green’s, in my opinion, is also a smart decision if you support human rights for the Palestinians and a real peace process in the Middle East.

The Palestinian, Arab and Muslim community and their friends in Independent Jewish Voices and in the wider community need to get engaged in Canada’s political process and volunteer, get signs, make donations and vote based on the issue of Palestinian human rights. The supporters of Israel usually vote on who supports Israel the strongest. They also donate money and get involved organizationally. Supporters of Israel also vote. Israel’s supporters also attack anyone who has criticized Israel in the past, even if those criticisms are widely shared and justified.

There are over 1 million Muslims, around 300,000 Arabs and maybe as many as 100,000 Palestinians in Canada yet the Canadian mainstream political establishment ignores them or at least takes them for granted. There is no political penalty for supporting Israel and denigrating the Palestinians. This fact has to change before there will be improvement on the Palestinian issue in Canada.  Not to act is to ensure that nothing will change on the question of rights for the Palestinians.