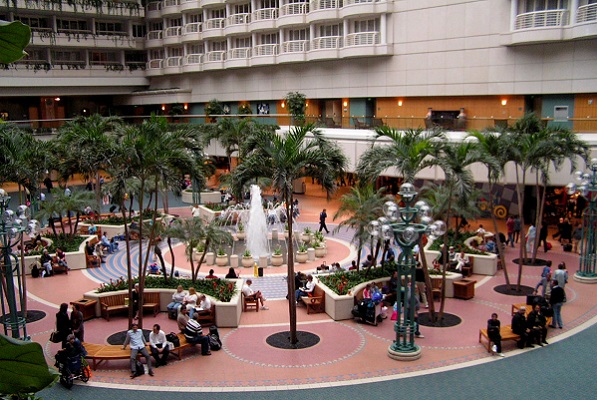 Accommodating Muslim travelers, a Florida international airport announced plans to build a prayer room for Muslims, as the flights to United Arab Emirates will start next month.

“Orlando is truly becoming a global community, and we want to be able to accommodate and provide high-quality amenities for all our passengers,” airport Director Phil Brown said in a written statement to the Orlando Sentinel.

With a cost of $250,000, a reflection room will be built at Orlando International airport where Muslim travelers used to pray in public or in restrooms.

Muslim travelers also used to pray in a nondenominational chapel tucked away on Airside B.

The prayer room will include an ablution area, or clean zone, carry-on-luggage bins and shoe racks, as well as directional signs for north, south, east and west.

According to Robert Susann, the airport chaplain, seeing Muslim at the chapel that has a couple of prayer rugs is not uncommon.

“We try to cover everybody,” Susann said. “We’re doing the best we can.”

“This is the place where we welcome people of all faiths,” he added.

“I’m here to bring the presence of God to them.”

Dedicating a prayer room to Muslims won the applause of the airport Chaplin who described it as a “good idea”.

He added that its location on Airside 4, where Dubai-based Emirates will be located, along with several other international carriers, will make it easier for Muslim travelers.

“That’s handier for them,” Susann said.

The five prayer times are divided all through the day which starts with fajr prayer at dawn.

Praising the prayer room, Shayan Modarres, an Orlando Muslim civil-rights attorney, said that it will be a welcome addition for the Muslims.

Many Muslims, he said, have felt isolated and uncomfortable in this country after the terrorist attacks of 9-11. But having a reflection room at the airport, he said, “is a great step in the right direction, especially for tolerance and inclusion.”

The Muslim attorney expects that the prayer room will draw dozens of Muslim travelers every day.

“This is the right message we need to send,” Modarres said. “It’s reconciliation.”

In addition to Muslim, the prayer room will be open to other faiths

“They like to have space where they can relax and pray.”

Orlando airport is not the first American airport to dedicate a prayer room to Muslim travelers.

Though there are no official estimates, the US is home to from 7-8 million Muslims.

Since the 9/11 attacks on the United States, many Muslims have complained of facing discrimination and stereotypes in the society because of their Islamic attires or identities.

A survey by the Pew Forum on Religion and Public Life last month found that American Muslims are the most moderate around the world.

It showed that US Muslims generally express strong commitment to their faith and tend not to see an inherent conflict between being devout and living in a modern society.

An earlier Gallup poll found that the majority of Americans Muslims are loyal to their country and optimistic about their future in the United States.