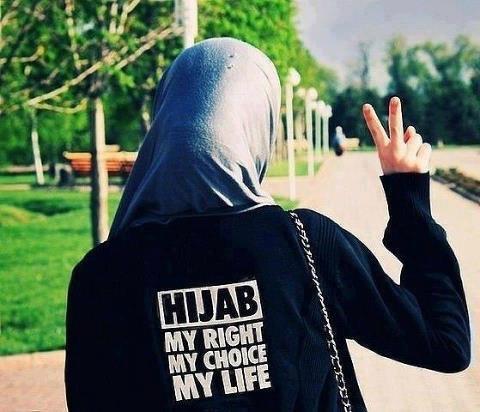 The term “hijabi” is gaining popularity and being used more commonly in everyday speech, social media and even mainstream media. In the context of fashion, women’s empowerment and social normalization, the word— which refers to Muslim women who wear the scarf— is cementing its foothold in American pop culture.

Last week, The Arab American News published a story on the “Harley Hijabi”, a local woman who drives a motorcycle. The Detroit News wrote a story headlined “‘Hijabi’ competes for spot on running magazine’s cover.” The Washington Post published a profile last month of a woman who wants to be “first hijabi anchor on American TV.” Earlier this year, Al Jazeera had an article on “Hip-Hop Hijabis”, a British rap duo.

In literature, the word started surfacing in the later half of the past decade. Guyanese American poet Raa’id Khan mentions the word Hijabi in his 2005 book “Inside my Mind.” In 2008, the University of Ottawa published a paper titled “An analysis of how hijabi youth experience social activities in Ottawa secondary schools.” In 2010, Canadian Muslim activist Farheen Khan published a memoir titled “From Behind the Veil: A Hijabi’s Journey to Happiness.”

Dr. Sally Howell, a professor of Arab American studies at the University of Michigan-Dearborn, said “hijabi” is an Americanization of the Arabic term “mohajaba”, which means “woman who wears the hijab.”

Mixing Arabic and English in daily speech, even within the same word, is common for Arab Americans. ” Parrik”— the verb “park” conjugated in Arabic— is a frequently used example of those bilingual words.

Adding “ing” to Arabic verbs is also a usual occurrence in Arab Americans’ speech. “Arggiling”, which comes from the word arggileh (hookah), sounds bizarre, but it is an ordinary word among young local Arabs.

Howell explained that “hijabi” is a convenient one-word description. She said the word has been around for a while, but it became frequently used in its simple current connotation after the 2011 reality TV show “All American Muslim”, which was based in  Dearborn.

“Before, when people used the term ‘hijabi’, it was dismissive, to make fun of people,” Howell said. “Now it is not used in that way at all. I hear it more as women who wear the hijab, who should be empowered.”

Howell added that previously “hijabi” was used as a term of reference to say Muslim women should not engage in certain activities, but now the term is normalized.

Howell said the frequent use of the word allows it to be used in a newspaper or a scholarly journal, as long as the author explains the term in the first reference.

She also said Arabic is making its way to the dialect of all Americans in Southeast Michigan. Besides “hijabi”, she cited words like “habibi” (my love), shabab (guys) and food items as popular terms that many Metro Detroiters use.

“The community is well-established,” she said. “This borrowing and sharing between languages is common.”

Aside from everyday speech, “hijabi” has grown into a fashion genre. The world wide web is home to hundreds of clothing blogs and stores that cater to Muslim women who wear the headscarf. “Hijabi” features frequently in the names of these forums.

Lama Habhab, the manager of Hijabee, a clothing store in Dearborn Heights, said the term has become more popular in recent year because of the changing demographic in the community.

She explained that it is mostly used by second generation Muslim Americans who mix Arabic and English in their speech.

Habhab said she elected to name her store Hijabee as a variation from the common spelling of the term because the shop appeals to the tastes embodied by the term.

“The word mixes together the Muslim and the American; the store does the same,” she said. “Girls born here and people who come from overseas can find something fashionable and modest at our store.”

Summer Albarcha, the founder of fashion blog Hipster Hijabis, said the word hijabi cannot be offensive because it simply refers to a Muslim woman who wears the headscarf.

She echoed Habhab’s comment about aiming to balance style and modesty.

Albarcha, 19, is studying business administration at Saint Louis University. She said her blog has received positive feedback from both Muslims and non-Muslims.

“I always strive to promote the best version of myself on social media, knowing I serve as role model to thousands of girls who view my outfit photos,” she told The Arab American News via email. “Because of the hijab and its prominence as a symbol of my Muslim identity, I am always reminded to wear modest outfits and encourage others to join in.”

But not all Muslim women appreciate the word.

Bassema Sayed, 36, dislikes the term “hijabi.” She said she finds the word too playful for the serious concept of the Islamic headscarf.

Sayed added that she prefers the Arabic term “mohajaba”, which commands more respect.

“Hijabi is stupid Dearborn terminology,” she said. “It is a lazy short word for something that means so much more than that; something that God tells us to do.”