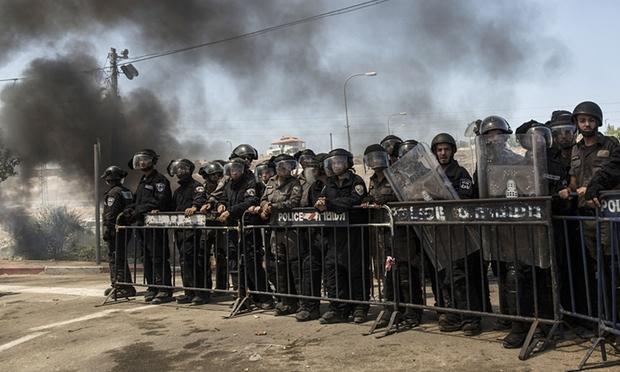 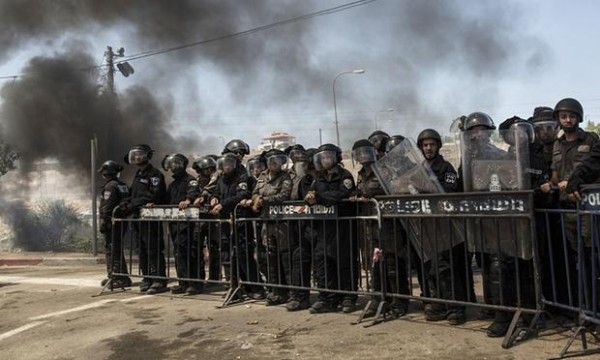 A Palestinian toddler was burned to death and four family members injured in a suspected arson attack by Israeli settlers on two homes in the occupied West Bank on Friday.

Visiting the family of Ali Saad Dawabsha, the 18-month-old who was killed, Israeli Prime Minister Benjamin Netanyahu promised a “zero tolerance” policy in pursuing those who committed the act.

Netanyahu also warned that Ali’s four-year-old older brother Ahmed had burns over 60 percent of his body, and was in a critical condition along with his parents.

The US State Department joined the condemnation on Friday afternoon, denouncing what it called a “vicious terrorist attack”.

In its brief statement, Washington urged Israeli authorities to apprehend the perpetrators as soon as possible, and called on all sides to “maintain calm and avoid escalating tensions”.

Though the US has in the past been critical of Israeli settlement-building policies, its statement on Friday did not mention settlements in relation to the attack, which came two days after Prime Minister Benjamin Netanyahu controversially approved 300 new settler homes in the West Bank.

The arson attack hit the village of Duma near the northern city of Nablus, threatened to further stoke tensions between Israelis and Palestinians.

Up to four assailants – believed to be Israeli settlers – smashed the windows of the Dawabsha family home at the entrance to the village before throwing Molotov cocktails and flammable liquids inside, locals told Palestinian news agency Maan.

The attackers scrawled graffiti in Hebrew that said “Revenge” and “Long live the Messiah” on a wall before fleeing to a nearby Israeli settlement.

The Palestine Liberation Organisation holds the Israeli government “fully responsible” for the death of the toddler, an official said.

The Israeli military said two homes had been set ablaze, and a child killed and four family members wounded.

Palestinian sources said those wounded included the toddler’s parents and another child.

Scorched clothes belonging to the killed toddler were shared on Twitter by journalists at the scene.

The Israeli defence minister said such attacks would not be tolerated.

“The fire and the murder of the Palestinian toddler is an act of terrorism,” Yaalon said in a statement.

“We will not allow terrorists to take the lives of Palestinians.”

The Israeli military has said it is working to track down the perpetrators.

Israeli human rights group B’Tselem said an attack such as this “was only a matter of time,” and blaming the government for failing to tackle settler violence.

“This [attack is] due to the authorities’ policy to avoid enforcing the law on Israelis who harm Palestinians and their property,” the group said in a statement. “This policy creates impunity for hate crimes, and encourages assailants to continue, leading to this morning’s horrific result.”

Israeli human rights group Yesh Din said in a November 2014 report that the conviction rate for crimes committed by Israeli civilians against Palestinians in the West Bank was just 1.9 percent.

120 settler attacks have hit Palestinians in occupied East Jerusalem and the West Bank since the start of 2015, according to figures from the UN Office for the Coordination of Humanitarian Affairs.

Hamas leader Hussam Badran said his movement holds the Israeli government responsible for the killing of the Palestinian toddler.

“This crime makes Israeli soldiers and settlers legitimate targets for the resistance everywhere,” said Badran, adding that Israeli settlers would not be deterred from committing such crimes unless the Palestinian response is appropriate.

Badran also called on the PLO to release all political prisoners and end its pursuit of resistance fighters, reiterating that there would be no end to Israeli crimes against Palestinians without a comprehensive resistance movement.

The arson attack follows days of tensions surrounding settlements in the West Bank, with right-wing groups opposing the demolition of two buildings under construction that the Israeli High Court said were illegal.

The demolition began on Wednesday, but Netanyahu authorized the immediate construction of 300 settler homes in the same area the same day.

Settlers had clashed with police when they moved in to demolish the buildings.

Netanyahu holds only a one-seat majority in parliament following March elections and settler groups wield significant influence in his government.

West Bank settlements are viewed as illegal under international law, but not by the Israeli government.

They are also major impediments to peace negotiations with the Palestinians, who see the land as part of a future independent state, and Western nations have called on Israel to halt construction.

Extreme-right Israeli activists have committed acts of vandalism and violence against Palestinians and Arab Israelis for years, attacking Christian and Muslim places of worship and even Israeli soldiers.

The attacks are known as “price tag” violence – a euphemism for nationalist-motivated hate crimes by settlers and far-right groups.