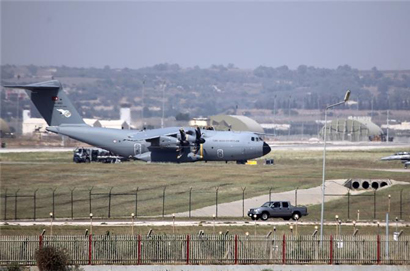 Turkey has said its military is not targeting Syrian Kurds after Kurdish forces and a monitoring group said tanks shelled Kurdish-held villages in northern Syria.

Turkey has said it is investigating the reports of shelling even as it continues to round up suspected activists of the Kurdistan Workers’ Party (PKK) and the Islamic State of Iraq and the Levant (ISIL) group as part of a double offensive.

If confirmed, Sunday’s night incident would be the most serious incident yet of Turkey targeting Kurdish-controlled areas in the Syrian conflict.

Kurdish officials said on Monday that overnight shelling targeted a checkpoint in a village outside Kobane manned by the Burkan al-Furat (Euphrates Volcano) battalion, a coalition of fighters from the Free Syrian Army and the Kurdish People’s Protection Units (YPG).

The Syrian Observatory for Human Rights said four fighters were injured in the shelling.

“A number of shells fired by Turkish tanks fell on the village of Zur Maghar, which is controlled by the Kurdish People’s Protection Units [YPG],” the UK-based monitoring group said.

Zur Maghar lies along the border with Turkey, in Aleppo province.

The YPG has proved to be Syria’s most effective force against ISIL, but its successes have been eyed suspiciously by Turkey because of its links to the PKK.

Turkey considers the PKK to be a terrorist organisation.

Earlier this month, Syria’s main Kurdish party, the Democratic Union Party (PYD), warned Turkey that any military intervention would threaten international peace and said its armed wing, the YPG, would face any “aggression”.

Last week, Turkey launched two military campaigns, one hitting ISIL in Syria, and the other targeting the PKK in northern Iraq.

The campaigns came after a suicide bombing on July 20 in the Turkish town of Suruc killed 32 people.

On Monday, a Turkish official told AFP news agency that “the ongoing military operation seeks to neutralise imminent threats to Turkey’s national security and continues to target ISIL in Syria and the PKK in Iraq”.

The official said the “PYD, along with others, remains outside the scope of the current military effort”.

A YPG official said that in a previous incident, Turkey had fired at a car belonging to the group in Kobane on Wednesday.

“We thought it was a mistake. But last night the shelling lasted for half an hour. So obviously it’s not a mistake,” the official said.

“Now the YPG is facing attacks from IS [ISIL] and Turkey,” he told AP news agency.