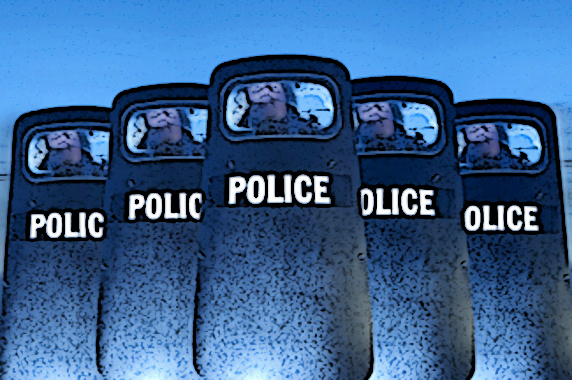 The country continues to struggle with the socially-damaging issues of racial profiling, police brutality, and deaths of People of Color by law enforcement. It is against this dysfunctional backdrop that many parents must develop proactive solutions to protect their children, who because of their physical appearance may become targets. My husband and I experienced this when my son Muhammad reached an age where being seen for not who he is but what society says he is could place him in peril when encountering some members of law enforcement.

Muhammad is the second oldest of our 6 children and our eldest son. Like most boys his age, Muhammad has a variety of and an ever-changing list of interests, likes and dislikes. He is a natural leader, reads two languages, and attends college-level seminars with his father. Muhammad belongs to a family with two parents who, like many parents, work to ensure that he is allowed to grow and develop into a productive member of society and are on constant vigil to keep him and his siblings safe from harm. Unfortunately, Muhammad’s father and I are also challenged to keep our son safe from the very people we expect to protect him.

There hasn’t been any major or overtly negative incident between Muhammad and law enforcement, something about which my husband and I are very grateful. Too often we read about the lives of People of Color being jeopardized. Consequently, we diligently avoid having our children in situations that may instigate a negative response from law enforcement. Initially, this is a simple matter. We organized where they went and who they were with when outside the home. When our children were young, we taught them to do the right thing and that the police are the good guys. It wasn’t until young Muhammad became 6’ tall and gained more autonomy that things became complicated. Muhammad’s father and I came to the realization that our teenage son was not construed the same as we knew him by the larger society.

This realization became concern when we visited a police station with him. We sought the assistance of law enforcement concerning our son. Upon entering the station, the police officer sized Muhammad up, and asked him his age. When he answered that he was 14, she looked incredulous. Her response was one Muhammad did get from others; he is often mistaken for an adult. However, this was a warning sign for me because Muhammad is not an adult. He is a teen, and will act and react like one. This can put Muhammad in a precarious situation. I concluded that if he were considered an adult, he would be treated like one, which is potentially life-threatening for a Black man confronted by police officers under circumstances less calm and controlled as they were that day at the station.

My husband and I decided it was time to give Muhammad the talk about law enforcement, which so many parents of children of color must convey. We had to encourage Muhammad to be extra conscientious and that he must not appear threatening or suspicious and not to make any sudden moves. Most importantly, we practiced with Muhammad to say nothing but “I am a minor, I want my parents.” We had to let him know that the police are not always the good guys, and there may be some that will hurt him just because they see him as someone, or something, to subdue.

Since then, and with recent events, Muhammad, his father and I recognized that his height and color, generally thought as physical assets, placed a target on him through no action of his own. Is it fair? Absolutely not, because Muhammad prays next to police officers at our local mosque and has family members who serve in law enforcement. Thus, he is conflicted because the good guys he once wanted to serve among are now the ones to be feared. I wish we didn’t have to make this young man have such worries, but as his parents, we have to protect him from every danger, including those presented by those wearing uniforms and possessing badges.