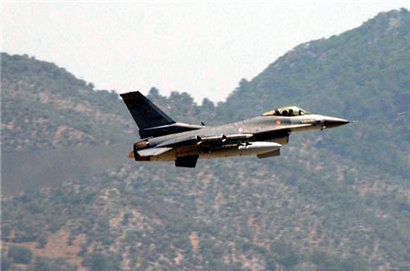 Turkey has said areas in north Syria cleared of fighters belonging to the Islamic State of Iraq and the Levant (ISIL) group will become safe zones.

Saturday’s announcement made by Mevlut Cavusoglu, the Turkish foreign minister, came after Ankara announced it had begun bombing ISIL positions in Syria and and Kurdish fighters’ camps in northern Iraq.

“When areas in northern Syria are cleared of the (ISIL) threat, the safe zones will be formed naturally,” Cavusoglu told a news conference.

“We have always defended safe zones and no-fly zones in Syria. People who have been displaced can be placed in those safe zones.”

The conflict in Syria has displaced more than 10 million people, with many residing in makeshift camps near the Turkish border.These areas have been targeted a number of times by Syrian military bombardment. The Turkish government has repeatedly called for the setting-up of safe zones to protect these people.

Several Turkish media outlets had earlier reported the government was considering setting up a 33km-wide safe zone inside Syria, stretching from the outskirts of Kurdish-held Kobane to areas controlled by pro-Western rebel groups.

Its purpose would be to strengthen the rebels’ hand against ISIL and prevent the Kurdish fighters from capturing new border areas.

The attacks on the outlawed PKK, which has waged a three-decade fight against Turkey, could kill off stumbling peace talks between the group and Ankara, which were started in 2012 but have been stalled lately.

“The truce has no meaning anymore after these intense air strikes by the occupant Turkish army,” the PKK said in a statement on its website.

The military action by Ankara was seen as a potential game changer in the war against ISIL.

Turkey earlier this week approved the full use of its airbases by the US-led coalition against ISIL, according to the foreign ministry, marking a major change in its policy following a suicide bomb attack in Suruc , bordering Syria.