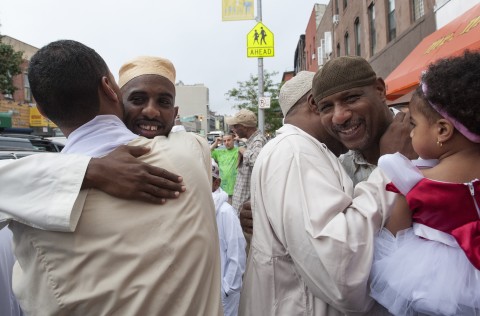 Sunni Muslims embrace each other after taking part in Eid al-Fitr prayers at a mosque in the Brooklyn borough of New York on August 8, 2013. Muslims in New York started to celebrate Eid al-Fitr on Thursday, an annual celebration which marks the end of the Islamic month of Ramadan. REUTERS/Stephanie Keith (UNITED STATES - Tags: RELIGION) - RTX12E78

Despite Black Muslims comprising over 25% of the American Muslim population, the continuing narrative about Muslims in the United States frames Islam as a religion exclusively for immigrants.  A Twitter campaign, #blackmulsimramadan, was recently launched to remind us of the rich Islamic cultural heritage in African-American communities.  Doctrinal candidate Donna Auston launched the hashtag to offer Black Muslims an opportunity to assert their distinct Islamic-American experiences.  On her Twitter page, Auston says, “Every year, news outlets do ‘Ramadan Around the World’ features–I almost never see people who look/celebrate like me.”

The campaign invited participants to begin posting pictures on 7/8/15 during the holy month of Ramadan.  Photos and remarks continue to be posted under the hashtag, some of which include non-Black Muslims opposing the campaign.  However, the majority of people posting with #blackmuslimramadan appear to be Black American Muslims and supporters, who want the world to know about the rich history and traditions that Native-born American Muslims developed over the hybrid culture’s extensive history in this country.

The #blackmuslimramadan campaign and reactions to it reflect the tendency to place immigrant Muslim cultural practices as normative representations of the American Muslim subculture while ignoring the traditions and cultural influences of African-American (who arguably maintain the oldest American Muslim histories and heritages), Latino-American, and Euro-American Muslims. Detractors of the campaign seem to mostly take issue with Black American Muslims asserting their discrete heritages extending from the amalgamation of their Islamic faith with their African-American experiences. Unfortunately, many of the oppositional posts do not appreciate the consistent silencing of the African-American Muslim voice, which serves as the catalyst for the Twitter campaign.

Native-born American Muslim populations extend from deeply rooted American heritages. Consequently, there is a desire among many NbA Muslims to maintain aspects of said heritages and indoctrinate them into their Islamic faith. However, there is a tendency for immigrant Muslim populations  as well as the broader society to disregard  NbA Muslims. The majority of discussions about Muslims in the United States typically focus on communities composed of majority foreign-born Muslim populations and Muslim heritages originating outside of the country. As a result the majority of Muslims with native-born American heritages and autochthonous Islamic identities  find their voices subdued and are  consistently underrepresented in the American Muslim narrative.

The campaign clearly shows that Muslims are not immune to the complexities of the racial structure in the American society, and it would be of  great benefit for Muslims of all races, ethnicities, and nations of origin to open honest and respectful dialogues about the effects of race and national identity on the American Muslim Ummah.

Layla Abdullah-Poulos attained a B.A. in Historical Studies and Literature at SUNY Empire State College. She is presently a student in the School for Graduate Studies’ Masters of Arts in Liberal Studies program.