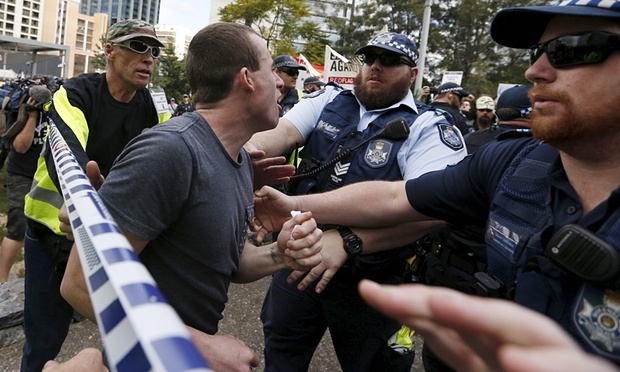 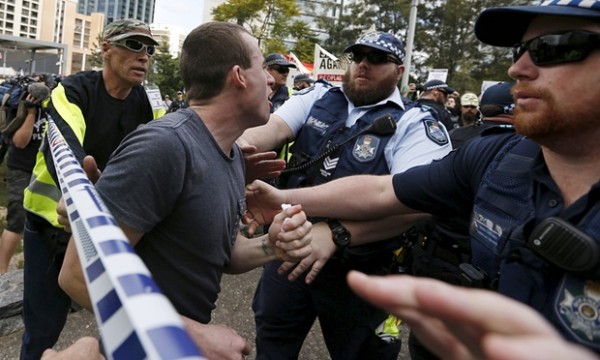 By: Joshua Robertson and Daniel Hurst

Federal government backbencher George Christensen has called for the “weeding out” of “anti-Muslim” elements from Reclaim Australia, saying he would happily attend his local mosque after speaking at one of the group’s rallies.

Christensen welcomed the departure of Reclaim Australia organisers in Brisbane to join an explicitly anti-Islam group, during a day of nationwide protests that drew heavy police presence amid heated exchanges with rival anti-racism demonstrators.

Angry scenes were repeated across the country, a day after clashes in Melbourne where hundreds of police stood between the opposing groups and dozens of people were sprayed with capsicum spray.

Christensen defended his rapport with Muslims in his north Queensland electorate after he was accused of giving tacit encouragement to bigotry by speaking at a rally in Mackay.

Former One Nation founder Pauline Hanson also spoke at a rally in Rockhampton where she said there were “divisions happening in our country and it’s purely based on Islam”.

Brisbane rally organisers announced mid-rally that they had split from Reclaim Australia to join the group “Australians Against Islam”, which aims to “dispel any public myths that Islam may be a peaceful religion”.

Christensen, who like Hanson sought to draw a distinction between opposing Islam and attacking Muslims, told Guardian Australia that Reclaim Australia “certainly want those people out of there”.

“Hopefully what’s being weeded out are those who would think along the lines that all Muslims should be deported, no one should be allowed to attend a mosque and all that thing,” he said.

“To say you’re anti-Islam, as long as you’re not anti-Muslim, someone can oppose the doctrine of Islam and that’s fine”.

During his speech – sometimes interrupted by heckling from opponents – Christensen quoted the former US president Ronald Reagan’s warnings about the risk of appeasement.

Christensen said: “We will not sit idly by and watch the Australian culture and the Australian lifestyle that we love and that is envied around the world, we’re not going to see that surrendered and handed over to those who hate us for who we are and what we stand for.”

Gesturing to members of the counter-protest, he said: “We will not hand over their free speech to those who hate us. And when Ronald Reagan spoke those words he warned against the threat of the then Soviet Russia, and those words apply equally now to the threat of Islamic extremism and its complicit defenders.”

“The apologists of the left, the do-gooders and the politically correct crowd said I shouldn’t address you because you apparently are a crowd of racists, bigots, Islamophobes, extremists, white supremacists, skinheads and Nazis, but when I look here today and I look at this crowd that’s not what I see. What I see is mums and dads who love our country, the Australian culture, the Australian lifestyle and our freedom.”

Hanson told the Rockhampton rally: “I’m not targeting Muslims – I’m targeting the ideology, what Islam stands for – and it is very different to our culture and Christianity.”

The opposition leader, Bill Shorten, accused the prime minister, Tony Abbott of “giving the green light for his MPs to be in there stirring up the problems” at the rallies.

“I’m deeply concerned if we’re unleashing racism in our community and these scenes of violence are absolutely retrograde,” Shorten said.

Islamic Council of Queensland spokesman Ali Kadri called on Christensen to prove he was not a “bigot” by visiting the mosque in Mackay, where, he said, harassment of local Muslims was the worst in the state.

Kadri said Christensen, who he claimed had not visited the mosque, had “not done enough research” on Reclaim Australia.

He said the group wanted to “stifle the right to religious practice of Muslims [and] regularly promote banning the mosques”.

“And to be honest, anyone associated with them, politicians or otherwise, are nothing but bigots in my eyes,” Kadri said. “Mackay Muslims face more extremism and racism towards them than anybody else: abuse on the street, people drive past and swear at the mosque all the time. By going to rallies like this, George Christensen is going to create extremists here in the guise of patriotism who are going to harm Australians.”

Christensen said Kadri was “talking out of his hat” as he had previously visited the Mackay Islamic centre to celebrate Ramadan.

“I’ve turned up to the mosque, sat through their prayers, celebrated Ramadan with them, and I’ve never had a crowd wanting to seek as many selfies in my life as when I turned up to that,” he said.

“There are some people with their noses out of joint about it but a lot do understand exactly where I’m coming from.”

Christensen said he had longtime family friends who were Muslims and he would attend the mosque again if invited.

Of harassment of Muslims in Mackay, Christensen said he had “no doubt that there have been times where Muslim people have been attacked by some idiot verbally”.

“It happens everywhere and it’s a bloody shame that people carry on like that,” he said.

“But I’ve go to say it’s not just the Islamic community [that suffers racism in Mackay]. Unfortunately racism is one of those ugly things that you’re never going to stamp out.”

Christensen said he condemned the position expressed by Australians Against Islam.

“Those people have got to realize that the only way Islam is going to weed out the radicals is through the moderates of Islam truly and firmly taking over the show,” he said.

“If you’re going to criticise the entire religion all you’re going to do is ingrain the radicals. At the same time, that doesn’t mean we shouldn’t be talking about the problem of radical Islam.”