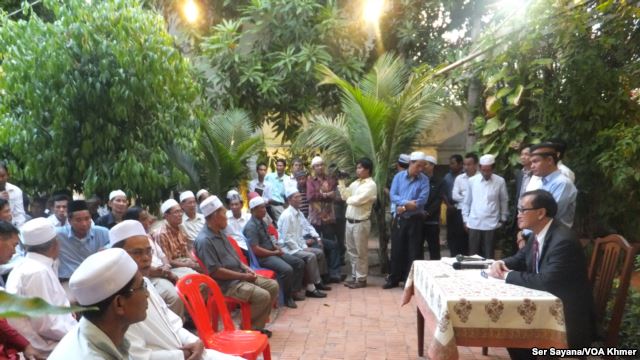 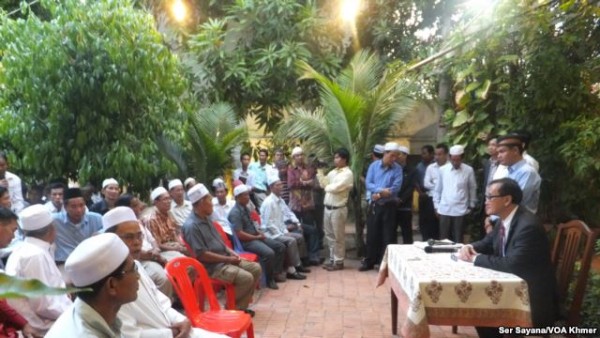 Speaking to about 100 people at an Iftar dinner to break the Ramadan last Sunday, Sam Rainsy said he hoped to create a TV station, “Sun Television,” that will be inclusive of many Cambodians, including its Muslims.

“We will offer time to Khmer Islam, at least one hour a day, to broadcast religious and general affairs,” he said.

The Cambodia National Rescue Party was granted rights to a TV station in political negotiations last year, but it is still seeking funding for it. The opposition has long complained of a media environment that heavily favors the ruling Cambodian People’s Party.

Sam Rainsy made other political pledges to the leaders, saying an opposition-led government would allow more mosques and Islamic schools to be built, and would allow girls to dress in traditional manner.

“A new government would allow Khmer Muslim women to wear hijabs, in line with Muslim tradition, when they apply for official documents, including passports, identification cards and all types of job resumes,” he said.

He also said he would promote the construction of public prayer locations, including at universities, hospitals, hotels and markets. Muslim workers would have three-days during Ramadan, he said, and Cambodia would expand its embassies in Muslim countries.

Kem Ley, a political analyst, said few of the pledges are possible with the ruling Cambodian People’s Party in power. “Sometimes politicians don’t conduct a deep analysis on whether they can do what they say,” he said. “Mostly they make too many promises.”